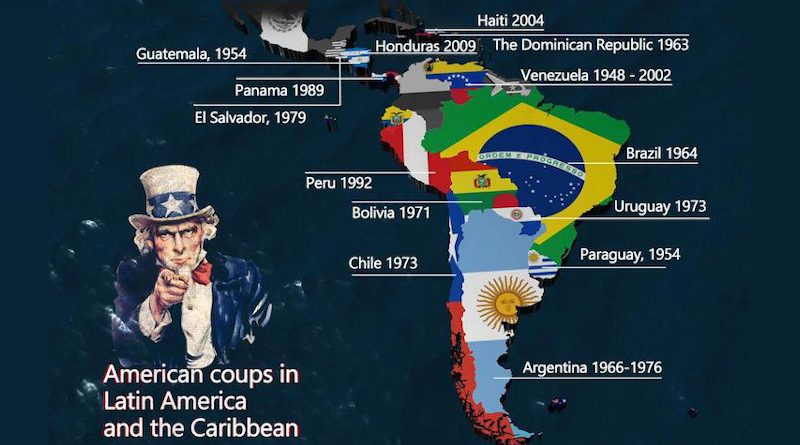 While protestors were occupying Washington DC’s Capitol Hill and ransacking the Congress Chambers – the centre of American power – President-elect Joe Biden addressing the nation said that the attempted insurrection was “not what we are”, perhaps unintentionally conveying the first ‘lie’ of his presidential reign beginning January 20. In fact, this is what America’s Central Intelligence Agency (CIA) is masters of doing overseas.

Since the end of the Second World War, it has been CIA’s favourite pastime to overthrow elected governments overseas or fund anti-government movements against elected governments claiming the people have been robbed by so-called “rigged” elections, when the US could not get their man elected.

From the overthrow of Mohammad Mossadegh in Iran in 1953 to supporting the coup to oust Eva Morales in Bolivia in November 2019, the US has aided insurrections to overthrow elected governments hundreds of times in Africa, Asia, Latin America and the Middle East.

For over a decade, Venezuela has faced the brunt of CIA’s attempts to overthrow, first President Hugo Chavez and now his successor President Nicholas Maduro. Thus, Venezuela was quick to point out in a statement referring to the drama at Capitol Hill, “with this unfortunate episode, the United States is experiencing what it has generated in other countries with its policies of aggression.”

After Maduro won the 2018 Presidential election with 68% of the vote, in January 2019, head of the National Assembly Juan Gaido, claimed that the 2018 election was rigged, and he is the real president. Gaido was strongly backed by President Trump and he got 50 other nations to recognize him as the legitimate president of Venezuela.

When this did not succeed, in September 2019, a US-trained group of former Venezuelan troops who had fled to neighbouring Colombia planned to mount an assault on the Presidential Palace in Caracas with US Air Force pilots dressed in Venezuelan uniforms to come by helicopter to capture Maduro. This plot failed as the Maduro government got prior knowledge of it.

Last month, the Maduro government won a resounding victory in the National Assembly elections which Gaido’s party boycotted, claiming it will be rigged. The US government has been fairly silent on the outcome, as Trump was fighting to overturn his own “rigged” election outcome.

“Though Biden says ‘this isn’t who we are’, in fact, this is consistent with a lot of deep traditions of the U.S. rulers” argued American investigative journalist Allan Nairn, in an interview on the popular US social media channel ‘Democracy Now’. He pointed out that American foreign policy is based on the concept that any election can be overturned as long as it is a foreign election.

“The U.S. has supported coups consistently, nonstop, through every administration,” he noted. “Obama and John Kerry — after the Egyptian Army staged a coup and overthrew the elected president, Kerry said they were acting to restore democracy. Trump, when he was president, along with General Kelly, his chief of staff, supported the stealing of an election in Honduras, where the candidate, Nasralla, was winning the vote count, and where, just shortly before, the U.S. had supported a coup to overthrow the elected president of Honduras, Zelaya. That was under Obama.”

In November 2019, Trump supported a coup in Bolivia, which overthrew Latin America’s only indigenous President Evo Morales. A White Evangelical Christian opposition politician, Jeanine Aries replaced him as interim president. After Morales was elected for a third time in October 2019, people were encouraged to riot claiming the election was rigged. This became the pretext for the US-backed coup.

Bolivia has one of the world’s largest supplies of lithium – a key mineral used in electric cars and smartphones – and at the time the Morales government is believed to be negotiating with the Chinese for a mining deal. Morales was forced into exile and when Aries called for an election, on October 18, Morales ally Luis Arce won a resounding victory by almost 20 points, thus defeating, yet another US-backed insurrection.

This year, the Chinese government accused the US of fermenting a youth rebellion in Hong Kong, claiming that is part of a broader campaign to undermine the Chinese Communist Party. Thus, Beijing has now begun to ruthlessly crack down on such dissent using legal means.

Recently, pro-government groups in Thailand have also claimed that the US is behind the anti-monarchy protest by the youth in Bangkok. A resolution introduced in the US Senate in December calling upon the US government to support the kingdom’s burgeoning youth pro-democracy movement has added further fuel to the idea of the US trying to topple a democratically elected government that is leaning towards China.

The US has a long history of supporting coups in Asia to overthrow democratically elected governments in order to bring in right-wing pro-US leaders. In 2017, a trove of newly declassified US diplomatic cables showed US involvement in brutal massacres of alleged Communists in Indonesia, after the US supported the overthrow of the anti-imperialist democratically-elected Indonesian leader Sukarno in 1965.

The coup brought to power military strong man Suharto who ruled Indonesia until 1998 without ever holding any democratic election. But he served US interests in Southeast Asia very well. The US has also supported pro-US military dictatorships in South Korea and Taiwan in the 1970s and 1980s.

In November 1998, then Vice-President Al Gore performed a similar act in Malaysia, to what Trump did this month in Washington. During a visit to Kuala Lumpur to attend an APEC summit, he gave a speech at the conference dinner praising the “reformasi” movement that was agitating against the democratically-elected Malaysian government led by Prime Minister Mahathir Mohamed, who was a strong critic of western policy.

In July 2013, Al Jazeera reported that a review of dozens of US federal government documents shows that Washington has quietly funded senior Egyptian opposition figures, who called for the toppling of the country’s president Mohamed Morsi.

In June 2012 Muslim Brotherhood’s Morsi won Egypt’s first free democratic elections with a 51.7% of the vote. Activists bankrolled by the US-funded program include an exiled Egyptian police officer who plotted the violent overthrow of the Morsi government and an anti-Islamist politician who advocated closing mosques and dragging preachers out by force.

In July 2013. Egyptian army chief General Abdel Fattah al-Sisi led a coalition to remove Morsi from power and suspend the Egyptian constitution of 2012. The US refused to call it a coup and instead supported al-Sisi grab for power.

In the past five decades there are numerous instances where the US used all sorts of trickery to overthrow democratically elected governments in their backyard like in Grenada, Nicaragua, El Salvador, Brazil, Ecuador, among others, that were introducing progressive social development programs that the US sees as a threat to its corporate and security interests. The list is a long one tarnished by violence, human rights violations and killings.

While the US populations have been shaken by the assault on Capitol Hill this week, Nairn argues, “this assault on the Capitol, is really nothing by comparison to what U.S. operations have done in Latin America, in Asia, in Africa, in the Middle East, to other democratic movements and elected governments over the years”.

He points out that just days before the failed insurrection on Capitol Hill, the U.S. Congress, by an overwhelming margin, has passed the defence authorization bill to pump more money toward the Pentagon and overseas special operations, “to go in and overthrow democracy. “So, Americans are now getting a mild taste of their own medicine” says Nairn.