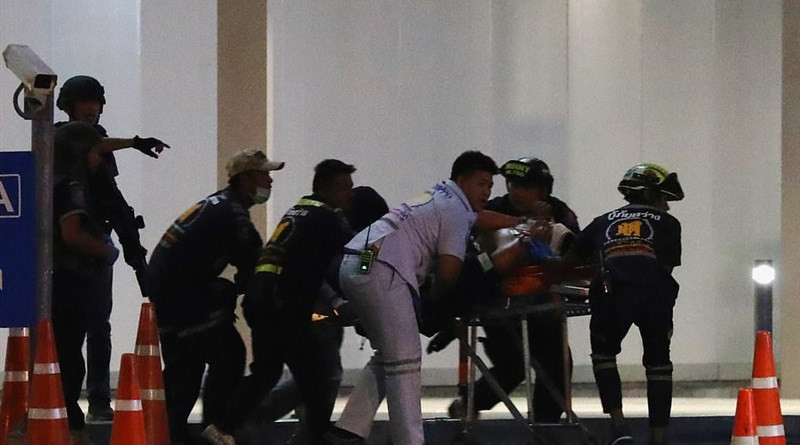 A Thai soldier allegedly angry over a property deal gone sour killed 29 people and injured another 58 before security forces shot him dead in northeastern Thailand, officials said Sunday, as they updated the death toll in an “unprecedented” 17-hour shooting spree.

About half of the dead were at a mall where the soldier barricaded himself for hours and reportedly took hostages, although officials did not say if any hostages had been killed.

Another 14 people died at a residence, an army barracks and near a temple the shooter drove by in Nakhon Ratchasima, a city of 2.6 million about 260 km (160 miles) northeast of Bangkok, according to a list of victims released by its chief health official.

“This kind of incident is unprecedented. The government cannot deny responsibility… We will help make sure it does not happen again,” Prime Minister Prayuth Chan-o-Cha told reporters Sunday, after visiting wounded people in hospital in the city, also known as Korat.

Thirty of the 58 injured were still in hospital late Sunday, according to Narinrat Phitchayakhamin, the health official.

Prayuth said that the gunman, identified as Sgt. Maj. Jakrapanth Thomma, 32, was motivated by an argument over a property deal with his commander, the first victim of the shooting.

“It was a personal conflict. He had a problem over a property deal. They argued over 3 days,” Prayuth said when reporters asked about the shooter’s motive.

Thousands of people staged a candlelight vigil to honor the dead late Sunday in downtown Korat.

The night before, gunfire and explosions could be heard at intervals as SWAT teams and special forces tried to end the standoff inside the mall.

Police rushed nine people out of the mall and into ambulances at around 3:00 a.m., live news broadcasts showed.

“He was killed. We are investigating the scene,” Lt. Gen. Thanya Kiatsarn, army commander for northeastern Thailand, told the media hours later.

The rampage began at around 3 p.m. Saturday afternoon, allegedly following an altercation over a land deal between the soldier and his commander, local media reported, citing police.

“Sgt. Maj. Jakrapanth Thomma had a psychotic break and shot at officials in a barracks, then took guns and bullets to shoot people, causing many public injuries and deaths,” Lt. Gen. Kongcheep Tantrawanich, a spokesman for the Defense Ministry, told BenarNews.

Jakrapanth allegedly shot dead his commander, Col. Ananroj Krasae, and an elderly woman at a residence in Korat. Then he drove to his barracks where he killed another soldier, and stole weapons, ammunition and a military vehicle.

He continued shooting as he drove to the Terminal 21 shopping mall, killing among others two policemen who tried to stop him.  More people were killed and injured outside the crowded, seven-story mall.

Relatives of people stranded in the mall said the gunman had taken hostages on its fifth floor, media reports said.

Commandos flown in by helicopter from Bangkok cordoned off the area and stormed the mall, then began evacuating terrified customers from its ground floor.

Facebook said it had suspended the gunman’s accounts and was working to remove “any violating content” after what appeared to be posts uploaded by the soldier during the rampage circulated online.

“We have removed the gunman’s presence on our services and have found no evidence that he broadcasted this violence on FBLive,” a company spokesman said in a statement emailed to BenarNews.

The suspect appeared briefly on FBLive but the seconds-long broadcast did not depict any violence, the statement said.