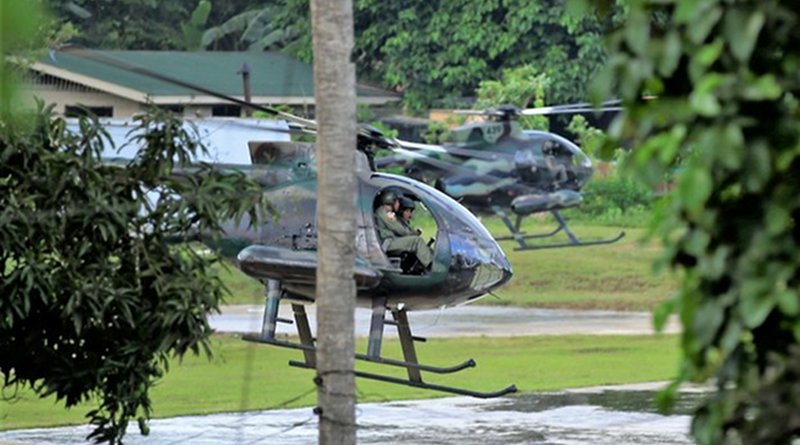 Two attack helicopters from the Philippine military reload missiles as their crews prepare to resume an assault on Abu Sayyaf militant positions Jolo island, an island in the southern Philippines, in April 2019. [Mark Navales/BenarNews]

Amidst the COVID-19 pandemic, the Abu Sayyaf Group continues its militant activities in the Southern Philippines and Sabah. There is a need to rethink strategies by both the Philippines and Malaysia to tackle the ASG more effectively.

The Philippine government declared on 16 March 2020 the entire Luzon island to be under “enhanced community quarantine”  ̶  a subtle term for a total lockdown  ̶  to deal with the COVID-19 pandemic. Terrorist activities in Mindanao of the Southern Philippines, however, remained unabated. Though local governments extended quarantine measures, the Abu Sayyaf Group (ASG), continued their kidnap-for-ransom operations, ambuscades, bomb-making, and other militant offensives.

On 17 April 2020, the ASG killed eleven and wounded 14 soldiers of the Philippine Army in a firefight in Patikul, Sulu. The ASG ambushed the Philippine soldiers while they were conducting their hot pursuit operations against followers of Radullan Sahiron and Hatib Sawadjaan, two top ASG leaders in Sulu.

The incident on 17 April in Sulu was the deadliest attack of the ASG since the Jolo Cathedral suicide bombings in January 2018. The Armed Forces of the Philippines (AFP) said that the attack was “the most devastating encounter for the military in a long while”. The encounter occurred a month after Mindanao was placed under quarantine due to COVID-19 threats.

The Office of the President of the Philippines released a statement exclaiming: “We condemn in the strongest possible terms the latest incident in Patikul, Sulu, where members of the Abu Sayyaf Group (ASG) believed to be under ASG leader Radullan Sahiron and Hatib Hadjan Sawadjaan attacked government troops resulting in a firefight, which left 11 soldiers killed and 14 wounded.”

The following day, on 18 April 2020, the Philippine military resumed its operations against the ASG. The operations resulted in a firefight with the ASG in Talipao, Sulu where a certain Vikram, the grandson of Sahiron, was killed.

Vikram, who was on the military’s wanted list because of his involvement in the Jolo Cathedral suicide bombings, was an expert on the manufacture of improvised explosive devices (IEDs).

On 23 April, another clash took place between the ASG and the Philippine Army in Patikul. Six ASG members died during the encounter but only three ASG members were identified namely Guro Khalid, Udal Muhamadar Said, and a certain “Budah”. Eight soldiers suffered wounds in this incident.

While implementing security measures against COVID-19, the Eastern Sabah Security Command (Esscom) placed the Malaysian state nearest to Sulu on high alert by beefing up its land and sea patrols to prevent the spillover of recent violent activities from Sulu.

In fact, amidst the outbreak of COVID-19 in March 2020, the ASG in Sulu planned to conduct kidnapping operations in Sabah. On 30 March, Malaysian intelligence had alerted the International Maritime Bureau (IMB) Piracy Reporting Centre about the intention of the ASG to carry out kidnapping activities in Felda Sahabat and Tambisan areas.

Need for Rethinking of Strategies

As demonstrated by its past and recent activities, the ASG is operating not only in the Philippines but also in the tri-border areas of Southeast Asia covering the Sulu Sea, Sabah and Sulawesi Sea.

There is currently the Trilateral Cooperation Arrangement among the Philippines, Indonesia and Malaysia on patrolling their shared maritime borders against piracy, terrorism and kidnapping. There is, however, a need to level up the existing arrangement as it is not fully deterring the ASG from conducting its usual illegal activities even during the pandemic.

With the combined threats of terrorism and the COVID-19 pandemic in the Southern Philippines and Sabah, the Philippines and Malaysia need a rethinking of their existing strategies to combat security threats. Terrorists worldwide are now exploiting the COVID-19 situation to further justify their violent extremist activities.

They have adapted to the pandemic to persist in propagating violent extremism. Thus, the world is bound to face multiple virulent threats. With this new situation, it is paramount for the Philippines and Malaysia to lead other members of ASEAN to formulate a coordinated regional response to combat multiple threats posed by terrorism, the pandemic, and others associated with them.

Without a coordinated regional response, Southeast Asian countries will find it difficult to combat these threats not only in the region but most importantly at home.

*Rommel C. Banlaoi, PhD, is the Chairman of the Philippine Institute for Peace, Violence and Terrorism Research (PIPVTR) and Professorial Lecturer at the Department of International Studies, Miriam College, the Philippines. He contributed this to RSIS Commentary.