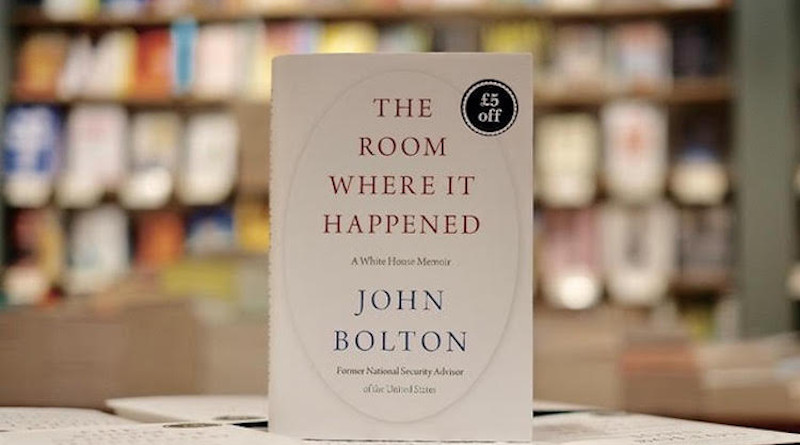 Cover of John Bolton's book "The Room Where It Happened." Photo Credit: IDN.

John Bolton’s ‘The Room Where It Happened’ opens with a bizarre epigraph touting the British triumph over Napoleon in the Battle of Waterloo. To liken Bolton’s ‘tell-all’ memoir of the Trump administration to the actions that destroyed an empire is a stretch, to say the least.

A far cry from inflicting mortal wounds on the Presidency, Bolton has thrown himself into the ring armed with nothing but a rubber sword. Just like the rest of the fleet of disaffected ex-Trump aides, he’s a bit of an irritation to the administration, nothing more.

Regardless, the former National Security Adviser for the President is earning his keep just fine with this new book. In only the first week of sales, 780,000 copies have been sold. It is entering its eleventh reprint, and it’s only been out for a couple of weeks.

The book is flying off shelves, being mentioned on twitter feeds, and taking time on television programs. Yet it will enact little real political change.

Bolton has all the ammunition to fire mortal wounds on the Trump administration. What his book makes abundantly clear is that he was Trump’s guy, there for the major decisions and deeply plugged into the life of the White House.

This book should have been the firing cylinder for the final blow, but instead, it’s a self-aggrandizing weapon of personal gain. So, what does it actually say?

It reiterates what you already know. Bolton describes the President as “stunningly uninformed” about foreign policy, as having no coherent strategy, but instead relying on “outbursts, off-the-cuff comments, knee-jerk reactions.”

Bolton criticises Trump’s knack for wasting time, flitting between decisions, tweeting without consulting aides, ignoring expert advice, and throwing tantrums about irrelevant matters. None of that is news.

Somewhat shocking is Bolton’s detail of Trump’s conversation with Xi Jinping in which he noted China’s economic power and alluded to how it might be used to influence the 2020 Presidential election. Bolton goes further to say Trump was “pleading with Xi to ensure he’d win.”

But we already know he levied security aid against the Ukrainians to influence the election, and then there’s the whole Russia debacle in the 2016 election that we know Trump was aware of.

The President’s questionable geographic knowledge comes to the fore when Bolton quotes Trump asking whether Finland is part of Russia. And just like how he tweeted about buying Greenland, Trump expresses random interest in invading Venezuela because, why not?

All that is interesting, and for all who oppose the President, it’s a satisfying douse of petrol on the fire of disapproval. Yet ‘The Room Where It Happened’ is a little anaemic on the incriminating juicy material. Unfortunate, given that’s the only real reason anyone’s reading it – they certainly aren’t for the literary qualities.

The book is at times painful to read and feels like you’re slogging through thick mud to find a few treasures. Perhaps his only literary success is the trail of breadcrumbs he entices the reader down, leading to the all-revealing chapter about Ukraine and the impeachment scandal.

Yet it is the ardour of reading the book that prompts its failure. Sifting through to find the outrageous comment or atrocious decision that fuels the thrilling anger against the President almost makes reading everything else worthwhile. But for the Trump supporter who is stoic in his belief that the book is all lies and fake news, he simply won’t read it.

In the discussion that has arisen surrounding the book, we’re already seeing this trend. Upon its publication, Trump called the book “a compilation of lies and made up stories,” claiming much of it is “pure fiction,” and in a Channel 4 interview, Republican Party National Spokesperson Liz Harrington described the book as “full of a bunch of nonsense and lies” calling it a “publicity stunt.”

If the President and the White House proclaimed the book ‘illegal’ to publish for national security reasons, I find it hard to believe it could all be lies. But the idea that it’s at least in part a publicity stunt holds up.

‘The Room Where It Happened’ is riddled with Bolton’s attempts to absolve himself of guilt in Trump’s worst decisions. It’s hard to know how much of it is true, but Bolton at least claims to have expressed opposition to Trump meeting with Kim Jong Un, and to the withdrawal of troops from Syria.

He describes having to talk Trump out of stopping military exercises with South Korea in the DMZ, and when Trump’s frequent rallying cry for NATO nations to increase defence spending once again fell on deaf ears, Bolton describes having to convince the President not to pull out of the group entirely.

He calls Trump’s erratic response to the attack on two oil tankers in the Gulf of Oman, and eventual last-minute decision to call off airstrikes on Iran, as “the most irrational thing I ever witnessed any President do.”

If true, Bolton gives a damning account of just how close the nation has come to major upset time and time again. And he’ll make sure you know who’s to thank.

I’ll spare you the cringy content, but Bolton is careful to include in parentheses the praises he received from world leaders, even when they have no bearing on anything at all. As for public criticism of his politics, he seems to enjoy it.

His swift critiques of Mattis, Kelly and Pompeo are studded by expressions of glee at his poor global reputation. He loves the antagonism and games, describing how “Cuba was now attacking me by name, so my spirits were high.” Any attention at all is good enough.

But while Bolton’s busy polishing his name for the history books (at one point laughing about the Pentagon being renamed ‘the Bolton Building’), there are still election campaigns raging all around us.

In light of a possible Trump re-election, the final chapters of the book are what any reader is waiting patiently for. Perhaps as atonement for not having testified, Bolton lays clear his “recollection” of what happened between President Trump and Volodymyr Zelensky in that now-infamous phone call.

Bolton states he believes Trump did “coerce” the Ukrainian President, and spoke of the affair as “bad policy, questionable legally, and unacceptable as presidential behaviour.” The public is right to ask why that threshold wasn’t enough to prompt Bolton to testify in the first place.

He gives some reasons for that. In an interview with USA Today, Bolton talks about how there are two “guardrails” in the constitution that limit a President’s power: elections, and impeachment.

He claims he chose not to testify because he didn’t think the impeachment proceedings were gone about in the right way, and therefore became too partisan to be successful. He’s publishing this book, he’d claim, to bolster the other guardrail: elections.

But this book lacks the umph, gravity, uniqueness and shock necessary to deliver a fatal blow to the Trump campaign. It’s another iteration of a common story; that Trump is unfit for office but can’t be gotten rid of.

By not testifying, Bolton retained some future in the Republican Party, but he tossed aside a real opportunity to bring forward questionable Presidential practice. Publishing ‘The Room Where It Happened’ is a safe, profitable way to reveal the same information, but without the political and legal weight of impeachment proceedings.

The book is interesting, but it’s a feeble attempt to oppose the Trump administration.

*Charlotte Munns is a London-based freelance writer who has specialized in English Literature and Middle Eastern Studies at Columbia University, New York