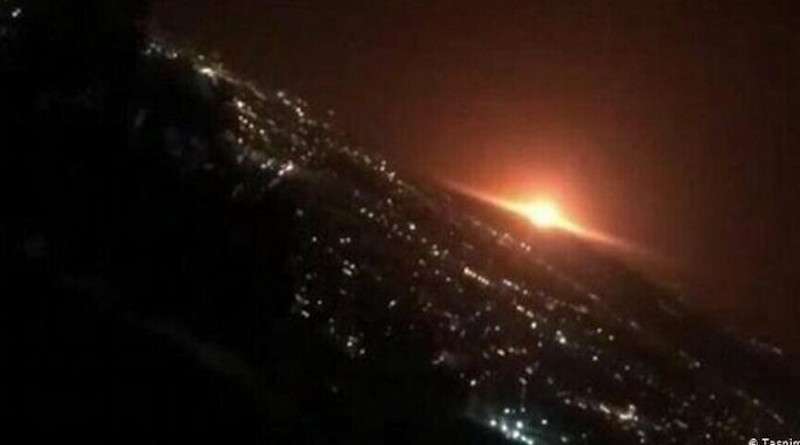 According to Iran's Defense Ministry this explosion at the Parchin complex near Tehran was caused by an exploding gas-storage tanker. Photo Credit: Tasnim News Agency

Iranian media reported an explosion in western Tehran in the early hours of Friday, 10 July, causing electricity to be cut in surrounding suburbs.  It was the latest in a string of mysterious blasts to rock the country.  At least three are known to have occurred in or around Iranian nuclear facilities, and initial reports claimed that the latest explosion was at a missile depot belonging to Iran’s Islamic Revolutionary Guard Corps (IRGC). Occurring over some ten days, they cannot be easily explained away.  The regime is undoubtedly under attack.  The question so far unanswered is, from whom?

Is this a covert onslaught masterminded by Israel, the US, or the two acting in concert?  Did Israeli F-35 fighters actually bomb one of the sites?  Are a group of anti-regime activists, working within Iran’s nuclear industry, taking covert action to prevent the regime acquiring nuclear weapons?  Were the incidents the result of sophisticated cyber attacks, or were they sabotage, caused by old-fashioned explosives?  There is a great deal of speculation, but so far nothing definitive has emerged.

It was on June 26, 2020 that the first of this series of incidents occurred.  Despite initial assertions by the Iranian Defense Ministry that there had been a minor detonation in the Parchin military complex, satellite images showed that it was at the nearby missile production complex at Khojir that a bomb had damaged a cache of gas tanks. The blast was later described as “a massive explosion” that had “burned a hillside”.  Parchin, near Tehran, is where Western powers suspect Iran carried out tests related to nuclear warhead detonations more than a decade ago.

On June 30 a detonation inside a medical center in Tehran resulted in a fire and the death of more than a dozen people.

The third, and perhaps the most serious, of this series of incidents occurred on July 2.  The Atomic Energy Organization of Iran (AEOI) announced that there had been an explosion in one of the industrial sheds under construction at the Natanz uranium enrichment plant.  US analysts identified it as a new centrifuge assembly workshop.  Centrifuges are needed to produce enriched uranium, which can be used to make reactor fuel and nuclear weapons.

Hours before the AEOI statement, however, according to reports on the BBC’s website, journalists working for BBC Persian had received an email from a hitherto unknown group calling itself “Cheetahs of the Homeland”, claiming that it had attacked the building. The group said its members were part of “underground opposition with Iran’s security apparatus”, and that they had deliberately arranged for the attack to take place above ground so that it “couldn’t be denied”.

That the BBC did indeed receive an email with advance information about the Natanz explosion, and that the mysterious “Cheetahs of the Homeland” claimed responsibility, must be accepted.  What remains unclear is the source of that message.  Is there really a covert group within Iran, seeking to disrupt the regime’s nuclear program?  Or was that email a piece of disinformation designed to camouflage the true source of the explosions?

Then on July 4 another massive fire damaged a power station in Khuzestan province.  According to the on-line Intelli Times, the plant’s method of operation − regulating electricity through automation and industrial controllers – makes it open to a cyber attack.

As for the Natanz attack, the New York Times reported that two well-placed, but anonymous, sources had confirmed that that explosion was not the result of a cyber attack, but had been caused by a “powerful bomb”, and that Israel had masterminded the operation

This version was countered by the Kuwaiti newspaper Al-Jarida which maintained that Israeli F-35 fighters had bombed the Parchin site (not the nearby Khojir nuclear facility), but the Natanz incident was an Israeli electronic attack targeting computers controlling storage pressure devices.

Whichever agency carried out the Natanz attack, Iran has not attempted to deny that it has had a significant effect on the country’s nuclear program.

“The incident could slow down the development and production of advanced centrifuges in the medium term,” said the AEOI spokesman, quoted by the State news agency.  “…Iran will replace the damaged building with a bigger one that has more advanced equipment.”

However, the damage to Iran’s nuclear project may be considerably more serious than this.  Al-Jarida pinpoints the target as UF6 gas (uranium hexafluoride), used specifically for uranium enrichment.  Iran has recently begun to produce UF6 for injection into the advanced IR-6 centrifuges it has been constructing at Natanz. The paper asserts that Iran has now lost 80% of its stock of this gas. Moreover, the Natanz explosion led to a “crack in the reactor building. Specialized groups went to the reactor to discover whether there was leakage of radioactive materials.” The building, which took six years to construct, became operational in 2018.

At a recent press conference Israel’s defense minister, Benny Gantz, said: “A nuclear Iran is a threat to the world and the region, as well as a threat to Israel and we will do everything to prevent that from happening.”

One thought on “Iran Under Attack – Analysis”