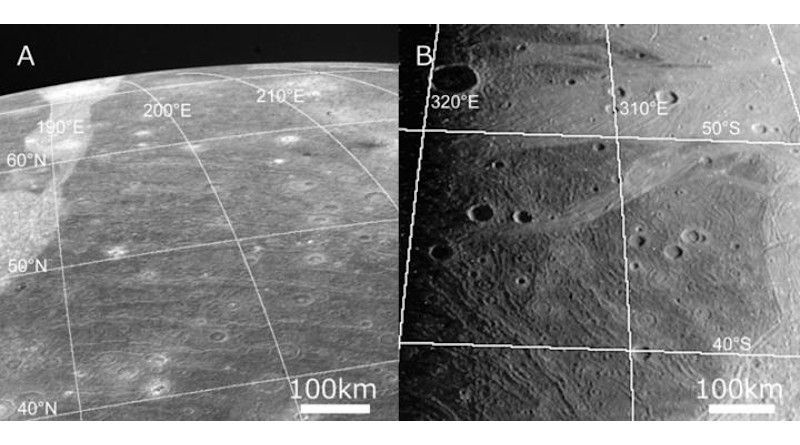 The Dark Terrain and Bright Terrain areas can be recognized, with concurrent furrows present in these Dark Terrains. CREDIT: NASA

Researchers from Kobe University and the National Institute of Technology, Oshima College have conducted a detailed reanalysis of image data from Voyager 1, 2 and Galileo spacecraft in order to investigate the orientation and distribution of the ancient tectonic troughs found on Jupiter’s moon Ganymede. They discovered that these troughs are concentrically distributed across almost the entire surface of the satellite. This global distribution indicates that these troughs may be actually part of one giant crater covering Ganymede.

Based on the results of a computer simulation conducted using the “PC Cluster” at the National Astronomical Observatory of Japan (NAOJ), it is speculated that this giant crater could have resulted from the impact of an asteroid with a radius of 150km. If so, the structure is the largest impact structure identified in the solar system so far.

The European Space Agency’s JUICE (Jupiter Icy Moon Explorer) mission, which will be launched in 2022 and arrive in Jupiter’s system in 2029, aims to increase our knowledge regarding Jupiter’s satellites, including Ganymede. It is hoped that this exploration will confirm the results of this study and further advance our understanding of the formation and evolution of Jupiter’s satellites.

The research team consisted of Kobe University Graduate School of Science’s Assistant Professor HIRATA Naoyuki and Professor OHTSUKI Keiji (both of the Department of Planetology), and Associate Professor SUETSUGU Ryo of National Institute of Technology, Oshima College. The paper for this study was published online in Icarus.

Both Voyager 1 and Voyager 2 have closely approached Ganymede in 1979 and 1980 respectively, taking detailed images of the surface. In addition, the Galileo spacecraft orbited Jupiter from 1995 to 2003, obtaining a large amount of Ganymede image data. Ganymede is the largest satellite in the solar system and is bigger than both Pluto and Mercury. The formation and evolution of Jupiter’s moons including Ganymede is strongly connected to the formation and evolution of the Jupiter system, and by extension, of the solar system. Consequently, there are various ongoing and planned spacecraft missions to explore the satellite system, including NASA’s JUNO mission that is ongoing, the Europa Clipper scheduled to perform a detailed investigation of Jupiter’s moon Europa in around 2030, and the aforementioned JUICE mission.

The study was conducted with the aims of clarifying one aspect of the formation and evolution of Jupiter’s satellites and of contributing towards these spacecraft missions. The group reanalyzed image data of Ganymede. In particular, the researchers focused on furrows (Figure 1), tectonic troughs that are believed to be the oldest surface features on the satellite. Therefore, the research group hypothesized that they could reconstruct the early history of Ganymede by analyzing these geological formations.

Ganymede’s surface is categorized into areas of Dark Terrain and Bright Terrain. Dark Terrain is extremely old and has many remaining craters, as well as trough formations (Figure 1). Bright Terrain is comparatively recent, with hardly any craters. These two types of terrain are not coherently arranged and are randomly distributed over Ganymede’s entirety. Furrows are believed to be Ganymede’s oldest geological features because they are only found on Dark Terrain and many impact craters (*1) have been formed on top of them later on.

This study reanalyzed the distribution of these trough formations over Ganymede’s entire surface, revealing for the first time that almost all of these furrows are concentrically aligned around a single point (Figure 2). The study showed that these furrows form giant, concentric rings over the entire satellite. From this, it can be assumed that there was a giant multiring impact crater which covered the entire surface of Ganymede before the formation of the Bright Terrain areas. A similar ring structure known as the Valhalla Crater remains on the surface of Callisto, another satellite of Jupiter. Until now, the Valhalla Crater has been the largest identified multiring crater in the solar system, with a radius of approximately 1900km. However, the multiring crater on Ganymede has a radial extent of 7800km measured along the satellite’s surface.

The research team conducted a simulation to estimate the scale of the impact that formed this giant crater. This was carried out using the “PC Cluster” at the National Astronomical Observatory of Japan (NAOJ). The results indicated that an asteroid with a radius of 150km impacting Ganymede at a speed of 20km/s would be sufficient to form the observed structures on the satellite’s surface. It is believed that such an impact occurred around 40 billion years ago.

The discovery that the aftermath of a large-scale impact remains on Ganymede’s surface is greatly significant in terms of the satellite’s formation process and evolution. For example, Jupiter’s satellite Callisto is around the same size as Ganymede, however it is believed that it doesn’t have an internal structure composed of differentiated layers. On the other hand, Ganymede is thought to be composed of a differentiated layer structure consisting of rock, iron and ice. An enormous amount of heat is necessary to form these differentiated layers. It is possible that the aforementioned large-scale impact could have been the source of this heat.

This study’s discovery will also have substantial significance for the Ganymede exploration programs scheduled in the coming decades. The image data from both Voyager and Galileo missions only provide partial views of the satellite’s surface. It is hoped that future explorations will be able to confirm or test this study’s results by conducting detailed investigations into the multiring formations and whether or not there are any other remains of large-scale impacts. Hopefully, this will result in a deeper understanding of the origins and evolution of Ganymede as well as Jupiter’s other moons.