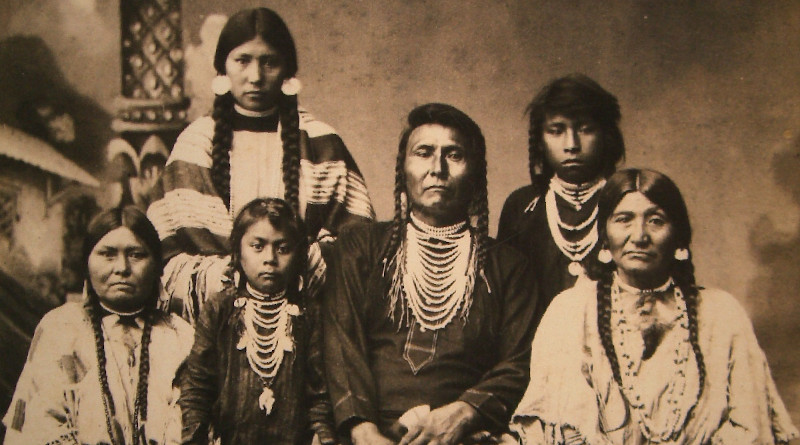 “Let me be a free man – free to travel, free to stop, free to work, free to trade where I choose, free to choose my own teachers, free to follow the religion of my fathers, free to talk, think and act for myself – and I will obey every law or submit to the penalty.” – Chief Joseph, Lincoln Hall Speech, 1879.

America prides itself on a distinctive legacy of freedom and justice. Yet despite our nation’s many enduring contributions to notions of human dignity, human rights, and political liberty, such gifts have not come without significant stains of hypocrisy and self-contradiction.

As the great abolitionist Frederick Douglass observed in his pre-Civil War reflections on the Fourth of July, our founding ideals have sometimes been left tragically unfulfilled. Despite the virtue and wisdom of the founding generation and a Constitution distinguished by “principles and purposes, entirely hostile to the existence of slavery” (as Douglass described it), examples of undeniable, state-sanctioned tyranny followed.

The disconnect has emerged across several areas in American life, with targeted coercion wielded against particular religions, races, ages, and people groups at various points in time. Each represents a dark spot in our national heritage, but one of the most pernicious and persistent has been our government’s posture toward and treatment of Native Americans.

Dehumanizing rules and restrictions have long regarded Native Americans not as free and creative persons, but as “wards of the state,” as Chief Justice John Marshall described them in Cherokee Nation vs. Georgia (1831). According to the Hoover Institution’s Terry Anderson, the result has been a convoluted reservation system that offers Native Americans a mix of incomplete property rights, reinforced by misaligned incentives and a manufactured resource curse of sorts – an outcome not unlike our top-down efforts to alleviate poverty elsewhere in the world.

Epitomized by laws like the Indian Reorganization Act (IRA) of 1934, tribal economies have been prodded to move farther from real independence, whether through the encouragement of outside cultures and government customs or through the state’s increased ownership and management of resources. “Tribal economies have been at the mercy of the federal government,” Anderson writes. “The socialistic economies that have evolved depend on the federal government for grants and loans and on tribal governments to spend the grants and invest the loans wisely.”

Fortunately, many indigenous communities have been working to overcome these obstacles, collaborating on policy reforms and systemic improvements to secure stronger property rights and decentralize control. More importantly, Anderson observes, they have sought to restore “the dynamic customs, culture, and dignity that existed before colonization.”

In three short films from The Hoover Project on Renewing Indigenous Economies, we get a concise, well-rounded view of the ongoing systemic injustices, as well as a picture of where solutions are ultimately found – and to what ultimate ends they should be directed.

As the film explains, there were many healthy economic systems and customs that predated American colonization. Although tribal traditions varied widely across the continent, we see patterns of responsible stewardship, innovation, and entrepreneurship – a pervasive embrace of property rights, trading partnerships, creative initiative, and the dignity of work:

Trade fostered prosperity, allowing many tribes to devote significant time and resources to leisure, art, and religious ceremonies. To support all of this economic activity, tribal governments evolved to fit regional conditions consistent with their customs and culture. This enabled indigenous economies to adapt successfully to climate and technological changes. Indigenous traditions of treaty-making and trade allowed native Americans to adapt and prosper by trading with Europeans who brought beads, steel, horses, and other new commodities. …

Eventually … as European settlement expanded, these dynamic, decentralized, indigenous institutions were forcibly replaced by centralized federal authority. This had dire consequences for Native Americans … What was once a relatively free, prosperous, and open society of indigenous economies was replaced with top-down federal control that stripped us of our autonomy, dignity, and sources of wealth.

As historian Amy Sturgis has written elsewhere, many of these customs and traditions became part of the American economic story well before the Revolution. Our history books all recognize the ways Native Americans collaborated with and taught early settlers and explorers, from the early Pilgrims to Lewis and Clark. Yet, somehow, we often forget or discount these contributions in assessing America’s long-term economic successes.

“Far from primitive or forgotten, the New World’s indigenous legacy of individual liberty, limited government, and legitimate law offer insights as fresh and relevant as the new millennium,” Sturgis writes. “While few if any scholars claim sole Amerindian influence for the Constitution, Benjamin Franklin’s writings on the Albany Plan of Union, Thomas Jefferson’s Notes on the State of Virginia, and other framers’ works make it clear that native American nations did indeed offer some inspiration.”

PART 2: COLONIALISM: THEN AND NOW

As mentioned earlier, the federal government has long participated in the dehumanization of Native Americans through a destructive mix of paternalistic rhetoric and social engineering:

For hundreds of years, the federal government has assumed a major and active role in managing all aspects of American life – a much larger and more intrusive role than it plays in non-native economic life. Even before our ancestors were forced onto reservations, the U.S. Supreme Court declared that the federal government functions as our guardian. We were reduced to the status of dependent wards, but the federal government failed to protect us and actually helped extract resources from our lands for the benefit of non-natives. Reservation boundaries were often drawn and redrawn to exclude us from valuable resources. …

Many rules and regulations affecting tribal lands are still dictated from Washington, D.C., where the Bureau of Indian Affairs oversees the management of 56 million acres of Indian country. Tribal governments and members remain legally obligated to defer to federal agencies on everything from land use decisions to managing a loved one’s inheritance. Most tribal governments rely on grants allocated by D.C. politicians and tied to meeting federal priorities rather than community ones. Over the centuries, a constantly changing regime of federal policies overturned economies based on entrepreneurship and replaced them with economies dominated by government interests. Starting a business is now very slow and difficult … A flourishing independent, private sector has withered away.

When it comes to solutions, many are already underway across various communities, carrying a host of implications – legal, cultural, institutional, and otherwise:

It is time to finally liberate tribes and tribal members from federal oversight. While the federal government must abolish its discriminatory laws, indigenous communities must also strengthen their own tribal laws. Across the country, indigenous communities are reforming their governments and reviving private sector economies. Tribes with diverse languages and cultures are reasserting jurisdiction over their land and people, reestablishing tribal sovereignty. …

Diverse tribes are finding ways to benefit from modern, market economies while protecting their unique customs and culture. But they have some things in common. Successful indigenous economies have legal institutions that respect the rule of law and ensure the enforceability of contracts. Despite the persistence of colonial obstacles, many Native Americans are regaining control over their lives and their resources.

Although the issues surrounding reservation policy and property ownership are important, when we listen to the perspectives of Native Americans, we see that this is more fundamentally about cultural renewal and revitalization. Freedom from government intrusion will surely lead to more innovation and wealth creation, but this is precisely because such freedom affirms the dignity of each person and removes barriers to creative relationships. “This economic renaissance in indigenous communities is about more than prosperity,” the narrator concludes. “It’s about dignity.”

As Bill Yellowtail has written:

Indian sovereignty – the autonomy of the Indian person – means re-equipping Indian people with the dignity of self-sufficiency, the right not to depend upon the white man, the government, or even the tribe. This is not a new notion. It is only a circling back to the ancient and most crucial of Indian values – an understanding that the power of the tribal community is founded upon the collective energy of strong, self-sufficient, self-initiating, entrepreneurial, independent, healthful – and therefore powerful – individual persons. Human beings. Indians.

This emphasis on human dignity and personhood is surely consistent with America’s original animating ideas, although it is inconsistent with the government’s treatment of Native Americans thus far. It ought to inspire us to respond accordingly – not sit idle, content to admire the foundations of liberty from whence we came. Instead, we must remain mindful of the work still left before us.

“We don’t need much,” Yellowtail concludes, “but we cannot function in today’s world without economic dignity. If we can achieve that, then we can free our creative energies for the greater works of community vitality and tribal sovereignty.”

*About the author: Joseph Sunde is an associate editor and writer for the Acton Institute. His work has appeared in venues such as The Federalist, First Things, The Christian Post, The Stream, Intellectual Takeout, Foundation for Economic Education, Patheos, LifeSiteNews, The City, Charisma News, The Green Room, Juicy Ecumenism, Ethika Politika, Made to Flourish, and the Center for Faith and Work. Joseph resides in Minneapolis, Minnesota with his wife and four children.