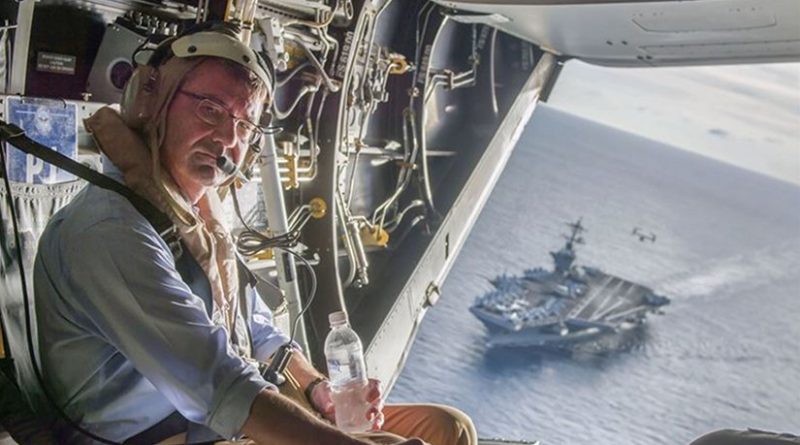 The USS Theodore Roosevelt can be seen in the background as Secretary of Defense Ash Carter flies in a V-22 Osprey after visiting the aircraft carrier with Malaysian Minister of Defense Hishammuddin Hussein Nov. 5, 2015. DoD photo by Air Force Senior Master Sgt. Adrian Cadiz

China’s long line of unrestrained aggressive posturing and provocative acts short of war commencing with the positioning of Chinese oil-drilling rigs in Vietnamese waters of the South China Sea in May 2014 followed by construction of ‘artificial islands’ on ‘Low Tide Elevation’ reefs, has belatedly but finally pushed the United States in what can best be termed as the first tentative checkmating steps of Chinese military adventurism in the South China Sea.

Since perceptions count heavily in geopolitical tussles, especially with China, the import of more assertive postures now being adopted by the United States on South China Sea issues would not be lost on China, mainly on two counts. Firstly, China should now register that it had pushed the United States to step backwards more than necessary by Chinese misreading of American intentions. United States ‘Risk Aversion’ on China in terms of avoidance of conflict had been sorely tested by China to the detriment of the United States image in Asian capitals.

United States reluctance to take strong and assertive postures against Chinese military adventurism was creating Asian perceptions on the very credibility of United States as the net provider of security in Asia and inducing hedging strategies on China is some Asian countries. This was having a negative impact on United States global standing too.

President Obama was under severe Pentagon pressure for over a year that it be allowed to order ‘Freedom of Navigation Operations’ by the US Navy to challenge China’s claims that its artificially created islands in the Spratly Islands archipelago had each one of them their own 12 miles sea jurisdiction, as a prelude to the eventual declaration of the South China Sea as an Inland Sea of China with a follow-up declaration of a Chinese ADIZ over the South China Sea. President Obama held his authorisation back until the recent Chinese President’s visit to Washington.

During the meeting of the two Presidents in Washington, President Obama emphasised to the Chinese President that China must cease the illegal construction of artificial islands as not only these were avoidable provocations but muddied the security and stability of the Asia Pacific. Chinese President was reportedly dismissive in his responses on this count to American sane strategic advice. In response, even before the Chinese President left Washington, the US President is reported to have authorised the US Navy to conduct FONOP naval patrols in the South China Sea.

On October 26, 2015 the first US Navy FONOP cruise patrol was undertaken by US Navy guided missile destroyer USS LARSSEN (DDG 82) when it not only breached the 12 nautical mile limit but patrolled right upto six nautical miles of Subi Reef an LTE artificial island where China had established military facilities. The US Navy is reported to have done this without any ‘prior notification’ to China as LTE do not warrant territorial sea limits. The US Navy destroyer had air-cover of two maritime surveillance aircraft. It can be presumed that the United States would have catered for offensive air support as a stand-by, should China have responded forcibly.

The Chinese response was limited to tailing of USS Larssen by two Chinese Navy ships for nearly 72 hours, besides vociferous protests and warnings by the Chinese Foreign Office.

The United Sates for more than a year has been in declaratory terms at various forums, including the annual Shangri La Dialogues, highlighting the dangers of Chinese brinkmanship on South China Sea and the imperatives of dialogues and conflict de-escalation. Evidently, this has had no impact on China smug in its belief that the United States would shy away from any assertive steps on South China Sea issues.

The United States drew support from the European Union in its new-found response and also from Japan and Australia. With such support accruing, there will be calls for an international effort by multinational naval effort for FONOP type patrols in the South China Sea to safeguard and secure the ‘freedom of navigation’ in international waters claimed by China as its exclusive own. What will be India’s response which recently has asserted adherence to the same principle?

It appears that the United States would have worked out a well-calibrated and graduated strategy to confront China’s anticipated hard military responses to US stiffening of postures in the South China Sea.

Concluding, one does hope that the United States breaks out of its ‘Risk Aversion’ self-imposed shell when it comes to confronting China with hard choices checkmating its aggressive brinkmanship in the South China Sea and the Asia Pacific. On this firm assertion would hinge the credibility of United States reputation as a nett provider of security in the Asia Pacific.