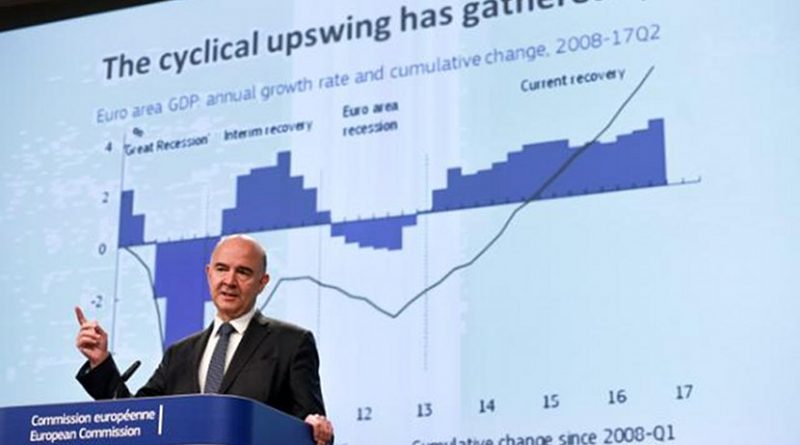 Pierre Moscovici, Member of the EC in charge of Economic and Financial Affairs, Taxation and Customs. Photo Credit: European Commission.

The euro area economy is on track to grow at its fastest pace in a decade this year, with real GDP growth forecast at 2.2%. This is substantially higher than expected in spring (1.7%). The EU economy as a whole is also set to beat expectations with robust growth of 2.3% this year (up from 1.9% in spring).

Valdis Dombrovskis, Vice-President for the Euro and Social Dialogue, also in charge of Financial Stability, Financial Services and Capital Markets Union, said, “The EU economy is performing well overall. Economic growth and job creation are robust, investment is picking up and government deficit and debt are gradually decreasing. There are also signs of a resumption of a process of convergence in real incomes. There are however significant differences across Member States, with some of them still experiencing considerable slack in the labour market. Our policies need to remain firmly focused on making growth sustainable and inclusive. This means stability-oriented macroeconomic policies and reforms to boost productivity, adaptability to change and to ensure that the benefits of growth are spread widely across our societies.”

According to Pierre Moscovici, Commissioner for Economic and Financial Affairs, Taxation and Customs, “After five years of moderate recovery, European growth has now accelerated. We see good news on many fronts, with more jobs being created, rising investment and strengthening public finances. Yet challenges remain in the form of high debt levels and subdued wage increases. A determined effort from Member States is needed to ensure that this expansion will last and that its fruits are shared equitably. Moreover, structural convergence and the strengthening of the euro area are necessary to make it more resilient to future shocks and to turn it into a true motor of shared prosperity. The coming weeks will be decisive on this front.”

Growth has surpassed expectations but is forecast to ease somewhat

The European economy has performed significantly better than expected this year, propelled by resilient private consumption, stronger growth around the world, and falling unemployment. Investment is also picking up amid favorable financing conditions and considerably brightened economic sentiment as uncertainty has faded. The economies of all Member States are expanding and their labor markets improving, but wages are rising only slowly.

Although the cyclical recovery has now been underway for 18 uninterrupted quarters, it remains incomplete, with for instance still significant slack in the labor market and untypically low wage growth. GDP growth and inflation are therefore still dependent on policy support. The European Central Bank has kept its monetary policy very accommodative while some other central banks around the world have started raising interest rates. A number of euro area Member States are expected to adopt expansionary fiscal policies in 2018 but the overall fiscal stance of the euro area is expected to stay broadly neutral.

Job creation has been sustained and labor market conditions are set to benefit from the domestic-demand driven expansion, moderate wage growth, and structural reforms implemented in some Member States.

Unemployment in the euro area is expected to average 9.1% this year, its lowest level since 2009, as the total number of people employed climbs to a record high. Over the next two years, unemployment is set to decrease further to 8.5% in 2018 and 7.9% in 2019. In the EU, the unemployment rate is projected at 7.8% this year, 7.3% in 2018 and 7.0% in 2019. Job creation is expected to moderate, as temporary fiscal incentives fade in some countries and skill shortages emerge in others.

The headline consumer price inflation rate has fluctuated over the first nine months of the year under the influence of energy base effects. Core inflation, which excludes energy and unprocessed food prices, by contrast, has been rising but remains subdued, reflecting the impact of a prolonged period of low inflation, weak wage growth as well as remaining labour market slack. Overall, inflation is expected to average 1.5% in the euro area this year and is expected to dip to 1.4% in 2018 before climbing up to 1.6% in 2019.

The risks that economic developments could turn out better or worse than forecast are broadly balanced. The main downside risks are external, relating to elevated geopolitical tensions (e.g. on the Korean peninsula), possibly tighter global financial conditions (e.g. due to an increase of risk aversion), the economic adjustment in China or the extension of protectionist policies. In the European Union, downside risks relate to the outcome of the Brexit negotiations, a stronger appreciation of the euro, and higher long-term interest rates. By contrast, diminishing uncertainty and improving sentiment in Europe could lead to stronger-than-forecast growth, as could stronger growth in the rest of the world.

For the UK, a purely technical assumption for 2019

Given the ongoing negotiation on the terms of the UK withdrawal from the EU, our projections for 2019 are based on a purely technical assumption of status quo in terms of trading relations between the EU27 and the UK. This is for forecasting purposes only and has no bearing on the talks underway in the context of the Article 50 process.

This forecast is based on a set of technical assumptions concerning exchange rates, interest rates and commodity prices with a cut-off date of 23 Oct 2017. For all other incoming data, including assumptions about government policies, this forecast takes into consideration information up until and including 23 Oct 2017. Unless policies are credibly announced and specified in adequate detail, the projections assume no policy changes.