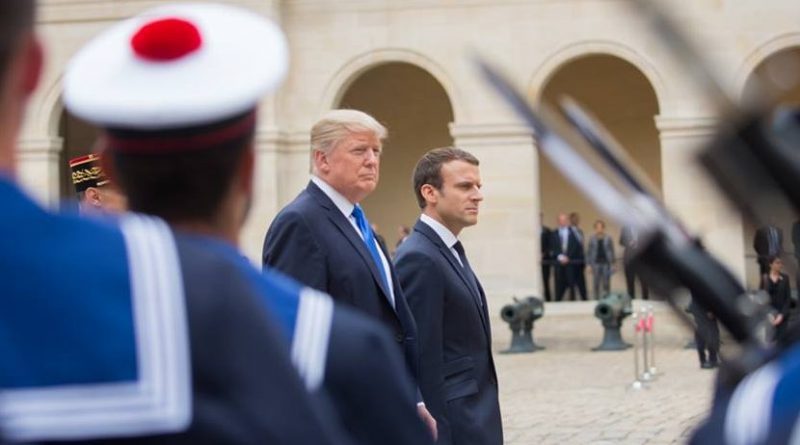 US President Donald Trump has unloaded on his French counterpart Emmanuel Macron, calling the French president’s idea of a ‘real European army,’ independent from Washington, an insult.

“President Macron of France has just suggested that Europe build its own military in order to protect itself from the US, China and Russia. Very insulting, but perhaps Europe should first pay its fair share of NATO, which the U.S. subsidizes greatly!” the US president tweeted on Friday evening.

Trump was referring to the recent interview Macron gave to Europe 1 radio, in which he outlined the idea of a combined European army that would be able to protect Europe from Russia, China… and the US.

“We have to protect ourselves with respect to China, Russia and even the US,” Macron said at the time.

The relationship between Trump and Macron, once described as a ‘bromance’, has long since soured amid the US imposing steep tariffs on EU imports and threatening European businesses with secondary sanctions for dealing with Iran.

Trump’s recent decision to get the US out of the Intermediate-Range Nuclear Forces Treaty (INF) became another wedge driving European powerhouses and the US even further apart. In his interview, Macron argued that Washington’s withdrawal from the 30-year-old arms treaty with Russia, which banned the parties from having and developing short- and mid-range missiles, has undermined European security.

Who is the main victim? Europe and its security,” the French president said.

The rationale behind the idea of creating a European army, which has been floated repeatedly through the years but has yet to materialize, is to lessen Europe’s dependence on the whims of the US politicians, Macron indicated.

Trump’s calls for Europe to pay up are one of his favorite topics. Since the beginning of his term, Trump has been urging US NATO allies in Europe to up their defense spending. Trump argued that the current target of 2 percent of GDP, which only five NATO members have met this year, is too low and must be doubled.

The US president believes that his country has been treated unfairly and “taken advantage” of by the EU on trade as well. He went as far as to brand the EU a “foe” alongside Russia and China, in wake of the NATO summit in July.

Home » Trump Slams Macron’s Idea Of European Army For Protection From Russia, China And US

One thought on “Trump Slams Macron’s Idea Of European Army For Protection From Russia, China And US”