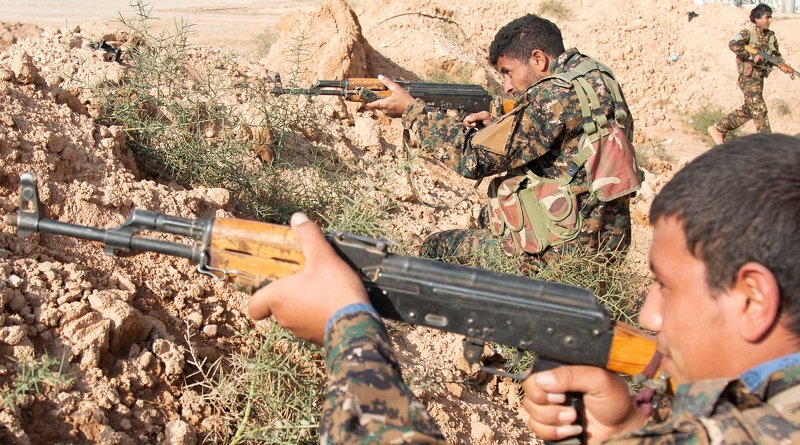 Revenue from oil fields in Syria supports the Syrian Democratic Forces, not the United States, said a defense official.

“The revenue from [oil fields] is not going to the U.S. [It] is going to the SDF,” said Jonathan Rath Hoffman, assistant to the secretary of defense for public affairs, during a news conference earlier this week at the Pentagon.

According to Navy Rear Adm. William D. Byrne Jr., the vice director of the Joint Staff, ISIS was in control of the oil infrastructure in Syria in 2015 and was producing 45,000 barrels a day — worth about $1.5 million.

Hoffman said ISIS used that money to fund operations not just in Syria and the region, but throughout Europe and the world. “And we want to prevent that from happening,” he said.

The U.S. military and partners in Syria now work “shoulder to shoulder” to keep ISIS forces from ever again having access to the Syrian oil infrastructure and the revenue it produces, Byrne said. Nevertheless, controlling the oil fields in Syria is not the U.S. mission in the country.

“The mission is to defeat ISIS,” Byrne said. “The securing of the oil fields is a subordinate task to that mission. And the purpose of that task is to deny ISIS the revenues from that oil infrastructure.”

Hoffman said ISIS is not eliminated, rather, it’s weakened from what it once was.

“The physical caliphate, the physical ownership and control of land, has been defeated,” he said. “We’ve not said that ISIS as an ideology and ISIS as an insurgency has been eliminated.”

Now, he said, ISIS conducts insurgent operations in the country, but continues to look for opportunities to regain its strength. “One of the ways they would be able to grow that back is by obtaining access to revenue, including the oil fields.”

Hoffman said U.S. efforts to secure oil fields in Syria serve two purposes. The first is to keep ISIS from benefiting from the revenue the oil fields provide.

The second, he said, is to provide Kurds in the area and the SDF with the funding they need to keep pressure on ISIS.

“It’s preventing ISIS from getting it,” Hoffman said, while at the same time allowing the Kurds and the SDF to have control of it, as well.