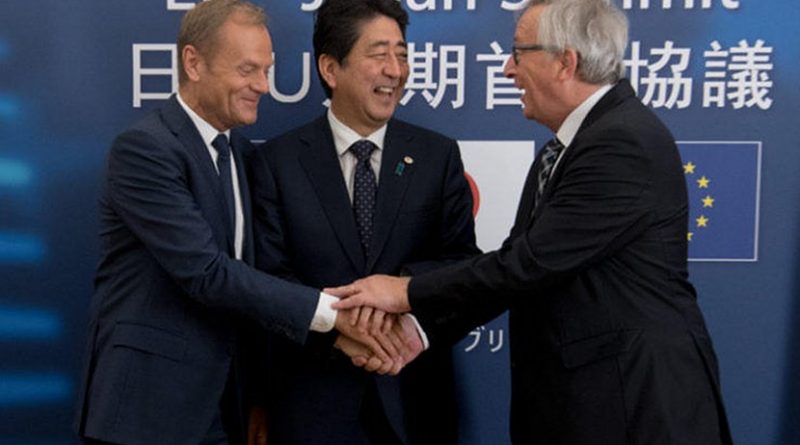 Building on the political agreement in principle reached during the EU-Japan Summit on 6 July 2017, negotiators from both sides have been tying up the last details in order to finish the legal text. This process is now finalised.

The way to theoutcome was paved by the strong personal engagement of the President of the European Commission Jean-Claude Juncker and the Prime Minister of Japan Shinzo Abe throughout the process and notably in 2017 at the occasion of their meetings held in Brussels, in March and in the margins of the G7 Summit in Taormina, in May.

The conclusion of these negotiations is an important milestone to put in place the biggest bilateral trade agreement ever negotiated by the European Union. The Economic Partnership Agreement will open huge market opportunities for both sides, strengthen cooperation between Europe and Japan in a range of areas, reaffirm their shared commitment to sustainable development, and include for the first time a specific commitment to the Paris climate agreement.

After confirming the conclusion of this process in a phone call with Prime Minister Abe, President Jean-Claude Juncker said: “This is the EU at its best, delivering both on form and on substance. The EU and Japan send a powerful message in defence of open, fair and rules-based trade. This agreement enshrines common values and principles, and brings tangible benefits to both sides while safeguarding each other’s sensitivities. In line with the commitment made in July, we finalised the discussions before the end of the year. We will now do the necessary to submit the agreement to the European Parliament and EU’s Member States so that our companies and citizens can start exploring its full potential before the end of the mandate of my Commission.”

“Right on time – we are delivering on our promise to finalise this win-win agreement during this year,” said Commissioner for Trade Cecilia Malmström. “The EU and Japan share a common vision for an open and rules-based world economy that guarantees the highest standards. Today, we are sending a message to other countries about the importance of free and fair trade, and of shaping globalisation.. The potential of this deal is enormous and I’m glad that the EU and Japan remain fully on course to sign it next year. That way, EU firms, workers and consumers will be able to enjoy the benefits as soon as possible.”

Commissioner for Agriculture and Rural Development Phil Hogan said: “This agreement represents the most significant and far reaching deal ever concluded by the EU in agri-food trade. It will provide huge growth opportunities for our agri-food exporters in a very large, mature and sophisticated market. We were successful in developing a model free trade agreement that fits our export profile, while still delivering a mutually beneficial agreement with our partner. This shows the EU as a global leader and standard-setter in shaping international trade and its rules – a concrete example of the EU harnessing globalisation to benefit our citizens. EU agri-food exports create high-quality jobs, most of them in rural areas.”

The outstanding technical discussions that have taken place since July have included: stabilising the commitments of the EU and Japan on tariffs and services; settling on the final provisions for protection of EU and Japanese Geographical Indications; concluding the chapters on good regulatory practices and regulatory cooperation, and transparency; strengthening the commitment to the Paris agreement in the trade and sustainable development chapter; as well as clearing up a number of minor remaining issues in several parts of the agreement.

The main elements of the agreement

The Economic Partnership Agreement will remove the vast majority of the €1 billion of duties paid annually by EU companies exporting to Japan, as well as a number of long-standing regulatory barriers. It will also open up the Japanese market of 127 million consumers to key EU agricultural exports and will increase EU export opportunities in a range of other sectors.

With regards to agricultural exports from the EU, the agreement will, in particular:

Concerning data protection, which is being dealt with separately from the Economic Partnership Agreement, a Joint Statement was issued during the July Summit, in which the EU and Japan stress the importance of ensuring a high level of privacy and security of personal data as a fundamental right and as a central factor of consumer trust in the digital economy, which also further facilitate mutual data flows, leading to the development of digital economy. With the recent reforms of their respective privacy legislation, the two sides have further increased the convergence between their systems, which rest notably on an overarching privacy law, a core set of individual rights and enforcement by independent supervisory authorities. This offers new opportunities to facilitate data exchanges, including through a simultaneous finding of an adequate level of protection by both sides. The EU and Japan continue working towards adopting adequacy decisions under the respective data protection rules as soon as possible in 2018.

This announcement means that the EU and Japan will now start the legal verification of the text, also known as “legal scrubbing”.

Once this exercise is completed, the English text of the agreement will be translated into the other 23 official languages of the EU, as well as into Japanese.