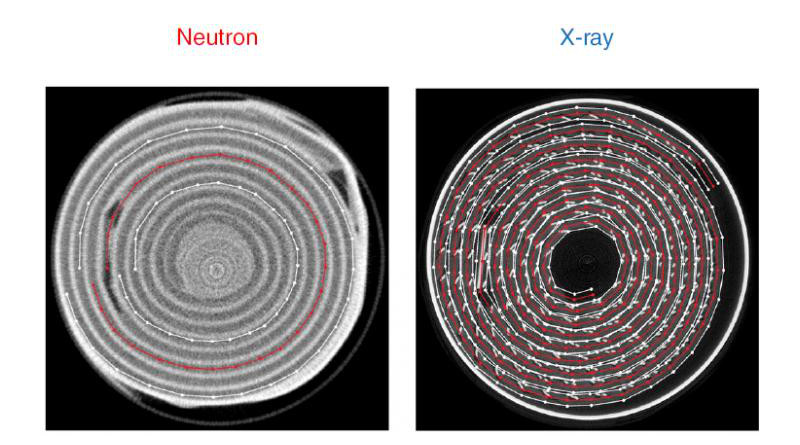 An international team led by researchers at UCL has revealed new insights into the workings of a lithium battery by virtually “unrolling” its coil of electrode layers using an algorithm designed for papyrus scrolls.

In a study published in Nature Communications, “4D imaging of Li-batteries using operando neutron and X-ray computed tomography in combination with a virtual unrolling technique,” researchers combined X-ray and neutron tomography to track the processes deep within a lithium battery during discharge. They then used a mathematical model designed for ancient manuscripts too sensitive to be physically opened to “unroll” the electrode layers, so aiding analysis and revealing that different sections of the battery were operating differently.

Researchers found that using the two complementary imaging techniques and “unrolling” the electrodes while they are in normal use provides a fuller and more accurate understanding of how the battery works and how, where and why it degrades over time. Unseen trends in the spatial distribution of performance in the cells were observed.

The method paves the way for developing strategies for improving the design of cylindrical cells using a range of battery chemistries, including by informing better mathematical models of battery performance. As such the method may facilitate improvements in the range and lifetime of electric vehicles of the future.

The project was funded by the Faraday Institution, as part of its battery degradation project.

The team investigated the processes occurring during discharge of a cylindrical commercial Li-ion primary cell from Duracell using a combination of two highly complementary tomography methods. Tomography is a technique for displaying a representation of a cross section through a solid object through the use of a penetrating wave such as ultrasound or X-rays. The method is used in radiology, archaeology, atmospheric science, geophysics, oceanography as well as materials science.

X-rays are sensitive to heavier elements in the battery – such as manganese and nickel, and neutrons are sensitive to lighter elements – lithium and hydrogen, allowing the two techniques to visualise different parts of the battery structure and allowing researchers to build up a more complete understanding of the processes occurring deep within the cell during battery discharge.

X-ray computed tomography allowed for the quantification of mechanical degradation effects such as electrode cracking from the electrode bending process during cell manufacturing. Whereas the imaging using neutrons yielded information about the electrochemistry such as lithium-ion transport and consumption or gas formation by electrolyte decay.

A new mathematical method developed at the Zuse-Institut in Berlin then enabled researchers to virtually unwind the battery electrodes that are wound into the form of a compact cylinder. The cylindrical windings of the battery are difficult to examine quantitatively, and the cell cannot be unwound without inducing further damage that would not be present in an unwound battery.