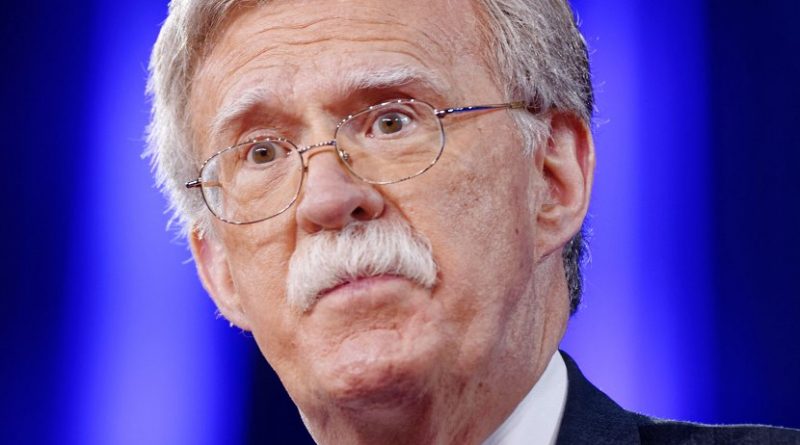 Mounting tension between the Trump administration and Iran are likely to shed light on US dynamics shaping today’s geopolitical environment.

Looming large is the figure of US national security advisor John Bolton, a proponent of a muscular US foreign policy in which the United States employs military force to impose its will and fortify its superpower status as the playground shifts from a unipolar to a multipolar world.

In the latest unprecedented move, it was Mr. Bolton rather than the Pentagon who announced the accelerated deployment of an aircraft carrier strike group to the Gulf in what the national security advisor framed as a warning to Iran.

In many respects, Messrs. Trump and Bolton share a common worldview that is aligned with the way men like Israeli Prime Minister Benyamin Netanyahu and the crown princes of Saudi Arabia and the United Arab Emirates, Mohammed bin Salman and Mohammed bin Zayed, define their countries’ national interests.

In a book acclaimed by conservatives, Israeli philosopher Yoram Hazony provided the tacit theoretical underpinnings of what goes beyond the worldview of Mr. Trump, his associates and Middle Eastern leaders.

Arguing that nationalism is a defense against imperialism redefined as the tyranny of universal values and liberal international organizations like the United Nations, the North Atlantic Treaty Organization, and the International Criminal Court, Mr. Hazony provides the basis for what amounts to a tacit agreement on shared values by autocrats, authoritarians and illiberals that also include the presidents of Russia, China and Turkey, Vladimir Putin, Xi Jinping and Recep Tayyip Erdogan, and the prime ministers of India and Hungary, Narendra Modi and Victor Orban.

Mr. Hazony’s theory, fuelled by mounting international criticism of Israeli policy towards the Palestinians, resonated because it harked back to right-wing anti-imperialism and rejection of universal values and standard-setting international institutions that restrict what can countries do, primarily within their own borders.

Embracing Mr. Hazony’s theory, however, does not stop men like Messrs. Trump, Bolton, Xi, Bin Salman, Bin Zayed and Erdogan from imposing their will on others as part of what they see as a national interest.

In America’s case, columnist Gideon Rahman argues that Messrs. Trump and Bolton are harking back to an era when the United States brutally pursued its interests without regard for others.

Theirs is an understanding that the United States is in the longer term unlikely to be able to compete against a China that eventually outstrips it economically and militarily.

“The Trumpian view is that the US has gone soft and risks ruin if it is too scrupulous when dealing with ruthless adversaries such as ISIS (the Islamic State) – or, even, with Russia and China,” Mr. Rahman said. He could just as well have included Iran as an example.

If there is a silver lining in all of this, it is that the jury is out in answering the question of who ultimately drives US policy towards Iran or for that matter Venezuela: Mr. Trump, who despite his bluster is perceived to want to avoid military entanglements, or Mr. Bolton to whom the military appears to be a magic wand.

The question is also whether the evolution of the North Korea crisis suggests that other crises like Iran could evolve similarly even if there are no indications as yet of that potentially being the case and despite the fact that Mr. Trump at one point declared his willingness to meet with Iranian president Hassan Rouhani.

Mr. Trump appeared to initially follow Mr. Bolton’s inclinations when he threatened North Korea to respond with “fire and fury” if it did not denuclearize and mocked North Korean leader Kim Jong-un as “Little Rocket Man.”

“Given the gaps in U.S. intelligence about North Korea, we should not wait until the very last minute. That would risk striking after the North has deliverable nuclear weapons, a much more dangerous situation,” Mr. Bolton said.

Yet, Mr. Trump has since held two inconclusive, if not failed summits with Mr. Kim, declared that “we fell in love,” and rejected Mr. Bolton’s advice to tighten the North Korean sanctions regime.

Similarly, Mr. Trump, frustrated that US efforts led by Mr. Bolton to oust Venezuelan president Nicolas Maduro, has privately half-joked that his national security advisor is seeking to drag him “into a war.”

For now, Mr. Trump appears to be more on board with Mr. Bolton’s hard line towards Iran than his approach towards Venezuela and North Korea.

While it is unclear whether Iran could prove to be the exception to the president’s anti-war inclinations, it could, in a twist of irony, be Saudi Arabia that proves to be a moderating influence.

Despite being a proponent of regime change in Tehran, Prince Mohammed’s interest in the short and medium term is likely to be destabilization of the Iranian regime rather than immediate replacement with a government capable of returning the Islamic republic to the international fold and quickly reclaiming its place in global oil and gas markets.

The sanctions on Iran give the kingdom the time to in the short-term establish itself as a major gas trader and within six years as a key gas exporter.

If that Saudi interest prevails, it would jell with Mr. Trump’s aversion towards war.

Iranian journalist Ahmad Hashemi argues that ‘Venezuelization’ or destabilization of Iran may prove to be Mr. Trump’s compromise formula.

“Donald Trump is anything but a warmonger. He doesn’t want Iraq and Afghanistan-style regime change because another costly war in the Middle East goes against his “America First” policy,” Mr. Hashemi said.

The failure of Mr. Bolton’s effort to overthrow Mr. Maduro could prove to be a watershed and, possibly, the straw that broke the camel’s back.