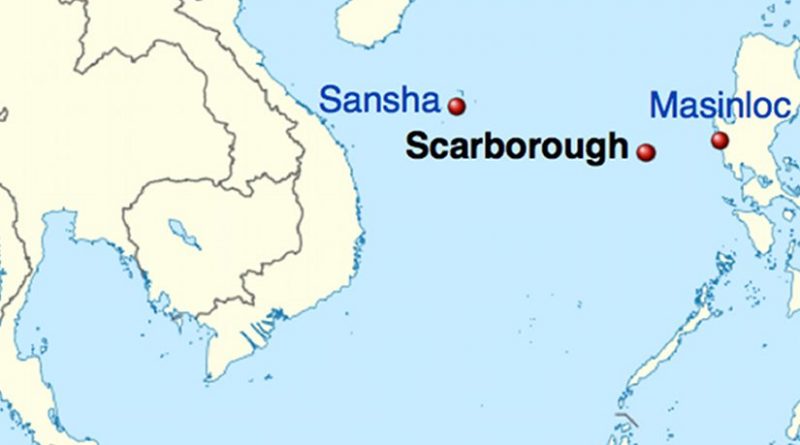 In the South China Sea, should the Philippines offer China a carrot of joint offshore joint development projects, or a stick of expanded Philippine-US multilateral sea patrols?

In coming days, a UN Tribunal is expected to rule in the Philippines’ favor in its territorial dispute with China over Scarborough Shoal. China has flagged it will reject any tribunal decision that doesn’t go its way.

When that happens, the ball will be in the Philippines’ court. Manila’s newly-elected, largely-untested president Rodrigo Duterte will have important decisions to make.

Given Duterte’s ‘tough guy’ image, one response for Duterte could be to participate in joint patrols with the United States to Scarborough Shoal. That would be a stick, since China would almost certainly hesitate to directly antagonize a US escort ship.

A carrot, by contrast, would be an offer by the Phillippines for joint oil and gas exploration of the Scarborough Shoal area. Duterte’s also lofted that trial balloon.

Chinese and Philippine companies have been holding on and off talks for years now regarding joint exploration and development of the Reed Bank area further south.

Some combination of the two would probably be Duterte’s best option. This would include a freedom of navigation exercise with US around Scarborough Shoal in response to the UN tribunal ruling, along with extension of a commercial olive branch to China of joint development at Scarborough Shoal.

Done right, neither side would lose face.

Both could potentially gain: China gets a social license, the Philippines gets needed capital –– and the Southeast Asian region would get a welcome template for managing rising military tensions.

The US — the Philippines’ primary military ally — would almost certainly bless this approach. It turns a territorial issue into a trade issue, providing breathing room for everyone. Result: nobody loses face; nobody starts shooting.

The US gets to claim a win on ‘freedom of navigation,’ the Philippines maintains its territorial assertion Scarborough Shoal lies within its 200 kilometer Exclusive Economic Zone, and China gets the best outcome for a bad hand of cards due to its miscalculated over-reach in the South China Sea.

Both are much more important right now than bullying the neighbors over offshore waters that may or may not have long-term economic value.

China’s most immediate problem right now is to find international outlets for spare capacity in its infrastructure industry.

Both may be forced to make politically-destabilizing layoffs without new projects. The AIIB, in short, was created in part to feed large infrastructure projects to these industrial state champions.

China’s already building a high-speed railway from southern China to Singapore through the Mekong States. China’s State Grid is upgrading the Philippine grid under a 25-year outsourcing contract.

Both are important showcase projects. Spillover tension in the South China Sea could jeopardize China’s ability to get more infrastructure like this in Southeast Asia because recipient nations may view such project as stalking horses for subsequent Chinese bullying.

Given the above, the ‘soft cop’ approach by both sides of signalling willingness to negotiate joint development areas looks the best bet all around.

China invests employment-creating capital and gets some political legitimiacy in the South China Sea. Southeast Asia’s minnows get inward investment, and an acknowledgement of their political legitimacy.

This matters over the longer-term. The reason is that the South China Sea may hold economically significant amounts of oil and gas. China has the capital and technology to develop the resources, a desire China has flagged with its Maritime Silk Road slogan.

This could start with joint exploration efforts between the Phlippines and China in Scarborough Shoal. It could then be expanded to Reed Bank, and later to the area northeast of Indonesia’s Natuna Island, and later still to the deep waters off South Vietnam and even the Tonkin Gulf.

All of the above have pedigree.

Philippine company Philex has been negotiating with CNOOC over joint development of Reed Bank on and off now for years. In 2012 and 2014, CNOOC made clumsy and unsuccessful attempts to auction off exploration leases in waters claimed by Vietnam. After that debacle, CNOOC began unilaterally exploring for oil off Triton Island in the Paracels, a disputed area that led to anti-Chinese riots in Vietnam.

Separately, Chinese fishermen recently have been making clumsy advance guard incursions into waters waters northeast of Indonesia’s Natuna Island. This has led Indonesia to beef up its military presence in the area.

The above all adds up to a picture of danger and opportunity. The danger is of a Tonkin Gulf type mishap that starts a shooting war. The opportunity is for Southeast Asian nations to confer political legitimacy on Chinese infrastructure investment that enriches everyone.

The AIIB can play a key role here. The next step, therefore, should be the resurrection by the Association of Southeast Asian Nation States of its Trans-ASEAN Gas Pipeline (TAGP) project, and its submission to China’s AIIB for funding.