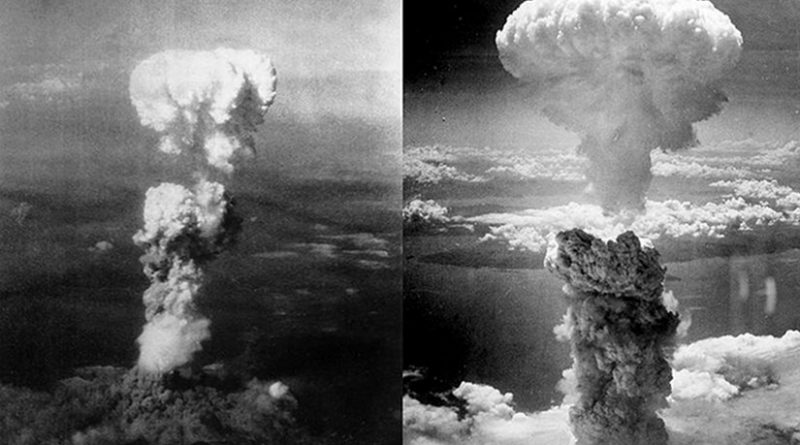 Nagasaki was the unfortunate target of the world’s first plutonium bomb when the United States decided to carry out a second nuclear attack on August 9, 1945. Innocuously named ‘Fat Man’, the bomb killed more than 70,000 innocent citizens and scarred thousands more – for life. Hiroshima, the first target, was bombed three days earlier on August 6 and is synonymous with the apocalyptic mushroom cloud in the global consciousness. The Americans had unveiled a weapon where the epitaph for the deceased was apt – ‘The living envied the dead.’

Nagasaki, often recalled as a post-script to the atomic horror that befell Japan, was truly unfortunate as a target. It has been revealed that it was originally not on the US target list and that Kyoto and later Kokura were chosen as targets post Hiroshima. On that fateful day – August 9 – bad weather over Kokura, located south-west of Hiroshima, made the US crew drop the plutonium bomb over Nagasaki .

On the 70th anniversary of the nuclear apocalypse (Sunday), Nagasaki has received more attention than it has in the past and the events included a protest by the survivors against Japanese Prime Minister Shinzo Abe’s proposed constitutional amendments that would alter Tokyo’s steadfast pacifist commitment. An 86 year old survivor, Sumiteru Taniguchi, has become the better known face of the Nagasaki victims and a book on the victims (“Nagasaki: Life After Nuclear War” by Susan Southard) vividly details what it was to be a Nagasaki hibakusha – the Japanese word for the hapless atomic blast survivors.

Japan, while being a victim of the world’s only nuclear weapon attack, is in a paradoxical situation. While committed to pacifism through its post World War II constitution, it yet seeks its strategic security under the extended US nuclear umbrella. The fig-leaf is that Tokyo follows a ‘don’t ask, don’t tell’ policy as regards stationing of nuclear weapons on its territory and territorial waters.

The 70th anniversary of the destructive Hiroshima-Nagasaki experience should compel a more rigorous review of the global nuclear weapon environment. While the Fukushima disaster drew attention to the dangers inherent in the global nuclear energy domain and the need for much greater regulation and oversight, the nuclear weapon world remains opaque and little noticed . The annual ritual of Hiroshima-Nagasaki sees the world paying tribute in a platitudinous manner and the UN Secretary General sends a message calling for a nuclear weapon-free world.

The next day it is back to ‘normal’ and the nuclear weapon facts are dismaying. A quarter century after after the end of the Cold War, the world still has almost 17,000 nuclear weapons – and 93 percent of this is held by the USA and Russia. While Washington has committed a whopping USD 1 trillion over a 30 year period to modernize its nuclear arsenal Moscow is working on a suitable counter – albeit with lesser fiscal resources.

Asia is distinctively animated as regards the nuclear weapon and of the world’s nine nuclear weapon states (US, Russia, France, UK, China, India, Pakistan, Israel and North Korea ) – Britain apart, all the other eight nations have an Asian / Eurasian locus, either directly or through proxy. The nuclear theatres of Asia are the north-eastern region wherein the US, Russia, China and North Korea are differently oriented; Southern Asia that includes China, India and Pakistan with the AQ Khan iceberg hidden; and the West Asia /Eurasia region that has the overlap of Israel and Iran (now committed to a stringent inspection regime ) and the uneasy Sunni monarchies – and, at a remove, Turkey, which as a NATO ally, has nuclear weapons and missiles (weapons of mass destruction – WMD) on its territory.

Managing the WMD aspirations and anxieties of this disparate continent is complex and the Hiroshima-Nagasaki moment is an apt occasion to review the muddied nuclear weapon-missile contours. Both North-East and West Asia are in a state of strategic flux (what if Japan become more normal given Chinese assertiveness) or meltdown (Syria and Iraq are illustrative and what if Iran is perceived to be in violation of its fissile material commitments ?) and various disturbing scenarios can be envisioned.

The most disturbing entity is the Pakistan factor wherein the facts are troubling. It is the only nuclear weapon state wherein the military has the control of the bomb and the civilian leadership is totally marginalized. Even North Korea and China have party control over their WMD assets. Pakistan has the dubious distinction of having spawned the AQ Khan network and like the Osama bin Laden-Abbotabad mirage – the world led by the US has accepted the make-believe that Dr. Khan was a lone operator driven solely by the greed of lucre. And the most scary characteristic is that Pakistan is a revisionist state that has used its WMD capability to nurture and support radical ideologies and terrorism – the very reasons that impelled the Bush administration to wage an ill-advised war against President Saddam Husain of Iraq in 2003.

To its dubious credit, the Pakistan military has succeeded in projecting a ‘victim’ image to its principal interlocutors and benefactors (USA, China and Saudi Arabia – and now Russia?) and has refined a policy of nuclear chutzpah that is extraordinary at many levels. The Pakistani establishment now brazenly talks about taking recourse to nuclear weapons against India even while supporting terrorism and remains obdurate about the AQ Khan investigation.

This posture is supported uncritically by Beijing (the quid pro being that Islamic terror groups in Xinjiang are kept under check) and tacitly by the USA. The latter response is the second level of being extraordinary – for apart from expending US wealth, American troops have been killed by the same groups supported by the Pakistani deep state. And the worst case scenario is that a terror group could access fissile material from an ideologically motivated insider with access to the Pakistani nuclear establishment.

Southern Asia poses a very complex strategic challenge as regards its extant nuclear weapon capability and deployment and the primary task is to get the narrative factually right. In the dominant discourse, the deviant has become the norm. Osama bin Laden and Mullah Omar represent the audacity of perpetuating a macro falsehood.

It would be a grave danger to extend this make-believe to the nuclear domain. The Nagasaki experience 70 years ago is a stark reminder.