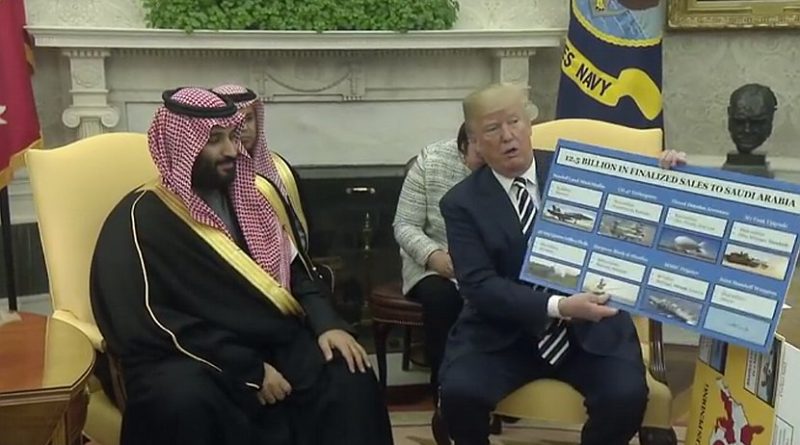 Saudi Arabia is bracing itself for a potentially more strained relationship with the United States in the wake of Democrats gaining control of the House of Representatives in this week’s mid-term elections and mounting Turkish efforts to corner the kingdom in the Khashoggi crisis.

To counter possible US pressure, the kingdom is exploring opportunities to diversify its arms suppliers and build a domestic defense industry. It is also rallying the wagons at home with financial handouts and new development projects in a bid to bolster domestic support for crown prince Mohammed bin Salman.

The Democrats’ election victory has strengthened Saudi concerns that the Trump administration may pressure the kingdom to back down on key issues like the Yemen war that has sparked the world’s worst humanitarian crisis since World War Two and the 17-month old Saudi-United Arab Emirates-led economic and diplomatic boycott of Qatar.

US officials have argued that Saudi policies complicate their efforts to isolate and economically cripple Iran.

The officials assert that the boycott of Qatar and the fallout of the October 2 killing of journalist Jamal Khashoggi in the Saudi consulate in Istanbul constitute obstacles to the creation of a Sunni Muslim alliance against the Islamic republic, dubbed an Arab NATO, as well as the achievement of other US goals in the Middle East, including countering political violence and ensuring the free flow of oil.

Going a step further, senior Israelis say they have given up on the notion of a Sunni Muslim alliance whose interests would be aligned with those of the Jewish state and see their budding relations with Gulf states increasingly in transactional terms.

The Trump administration signalled its concerns even before the killing of Mr. Khashoggi.

“Our regional partners are increasingly competing and, in the case of the Qatar rift, entering into outright competition to the detriment of American interests and to the benefit of Iran, Russia and China,” National Security Adviser John Bolton wrote to Secretary of State Mike Pompeo and Defense Secretary Jim Mattis in a letter late summer, according to Reuters.

With the House expected to be tougher on arms sales to the kingdom and possibly go as far as imposing an arms embargo because of the humanitarian crisis in Yemen caused by Saudi and UAE military operations, Saudi Arabia has wasted no time in casting around for alternative weapons suppliers.

In apparent recognition that the Saudi military, reliant on US and European arms acquisitions, would find it difficult to quickly shift to Russian or Chinese systems, Saudi Arabia appears for now to be focussing on alternative Western suppliers.

That could prove to be risky with anti-Saudi sentiment because of the Yemen war also running high in European parliaments and countries like Spain and Germany either teetering on the brink of sanctions or having toyed with restrictions on weapons sales to the kingdom.

With sale of the US-made precision-guided munitions bogged down in Congress, Spain has stepped in to address Saudi Arabia’s immediate need. The question is however whether Spain can fully meet Saudi demand.

A US refusal already before the Gulf crisis and the Khashoggi incident to share with Saudi Arabia its most advanced drone technology, paved the way for Chinese agreement to open its first overseas defense production facility in the kingdom.

State-owned China Aerospace Science and Technology Corporation (CASC) will manufacture its CH-4 Caihong, or Rainbow drone, as well as associated equipment in Saudi Arabia. The CH-4 is comparable to the US armed MQ-9 Reaper drone.

Saudi Arabia also fears that Democratic control of the House could strengthen opposition to a nuclear energy agreement with the kingdom. Five Republican senators called on President Donald J. Trump days before the mid-term election to suspend talks with Saudi Arabia.

Development of a defense industry would over time serve Prince Mohammed’s efforts to diversify the Saudi economy and create jobs.

So would King Salman’s inauguration this week of 259 development projects worth US$6.13 billion ranging from tourism, electricity, environment, water, agriculture, housing, and transport to energy. King Salman launched the projects during a curtailed visit to Saudi provinces designed to bolster support for his regime as well as his son, Prince Mohammed

On the other hand, the government’s most recent decision to restore annual bonuses and allowances for civil servants and military personnel without linking them to performance constitutes an attempt to curry public favour that runs contrary to Prince Mohammed’s intention to streamline the bureaucracy and stimulate competition.

Bonuses were cut in 2016 as part of austerity measures. They were restored last year and linked in May to job performance.

In a further populist move, King Salman also pardoned prisoners serving time on financial charges and promised to pay the debts up to US$267,000 of each one of them.

King Salman’s moves appear designed to lessen Saudi dependence on US arms sales and project a united front against any attempt to implicate Prince Mohammed in the death of Mr. Khashoggi.

The moves come as Turkish President Recep Tayyip Erdogan insists that the order to kill the journalist came “from the highest levels of the Saudi government” and the Trump administration demands Saudi action against the perpetrators and those responsible for the murder.

Failure to be seen to be taking credible action may not undermine King Salman’s rallying of the wagons at home but will do little to weaken calls in Washington as well as European capitals for tougher action in a bid to force Saudi Arabia to come clean on the Khashoggi case and adopt a more conciliatory approach towards ending the Yemen war and resolving the Gulf crisis.