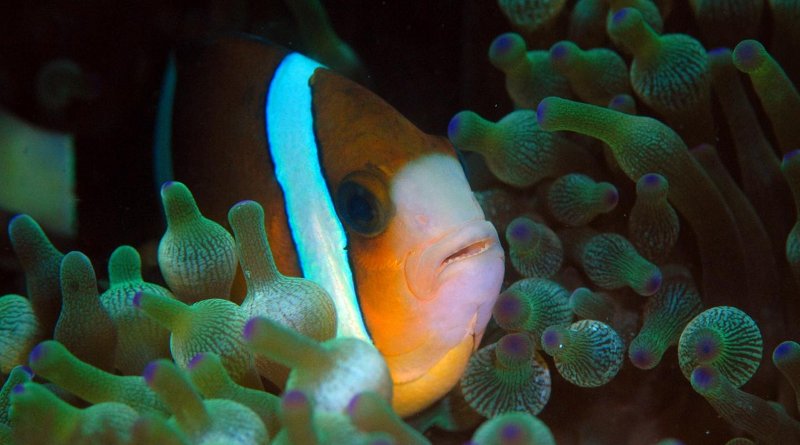 Great Barrier Reef anemonefish can see UV light and may use this to find anemones and other anemonefish. Credit: Prof Justin Marshall, University of Queensland

The fish made famous in Finding Nemo can see ultraviolet (UV) light and may use it as a ‘secret channel’ to find both friends and food, according to researchers.

Anemonefish are easily recognised by their striking orange and white patterning, but University of Queensland scientists set out to find out how ‘clownfish’ see their world and how that influences their behaviour.

Researchers at UQ’s Queensland Brain Institute (QBI) and the University of Maryland (USA) analysed the visual systems of a particular species of anemonefish, Amphiprion akindynos.

“We looked at everything starting with the genes they use to see and what proteins they express, and in combination with anatomical data, predicted what these anemonefish can see,” he said.

“Proteins involved in detecting light have minute, well-known differences that influence which wavelengths of light they absorb.”

QBI researcher Dr Fanny de Busserolles, who shares lead authorship on the study with Dr Sara Stieb, said the team was able to discover a unique specialisation in the eye of the fish that may allow them to better detect friends and their anemone.

“In the part of the anemonefish’s eye that looks forward, the photoreceptors detect a combination of violet light and ultraviolet light,” Dr de Busserolles said.

“They seem to be very good at distinguishing colour, and very good at seeing UV – it looks like they use it a lot.”

Dr Sara Stieb said the special ability made sense, based on the fish’s environment and food source.

“They live in symbiosis with anemones, and the anemones use UV to grow.

“Moreover, anemonefish feed on zooplankton which absorb UV light, so it would appear like dark dots against the background, making it easy to find.”

“Their visual system seems to be very tuned to recognising who is their friend and who is not,” he said.

“The white stripes on anemonefish reflect UV, which means they should be easier for other anemonefish to recognise.

“By contrast, a lot of the bigger fish – including ones that eat anemonefish – cannot see UV, so if you want to communicate on the reef over short distances, then UV is a very good way to do this.

“UV is essentially a secret channel that only these little fish can use to talk to each other,” he said.

“They can be as flashy as they want and they won’t be seen – and it might be how Nemo’s cousin finds its friends.”