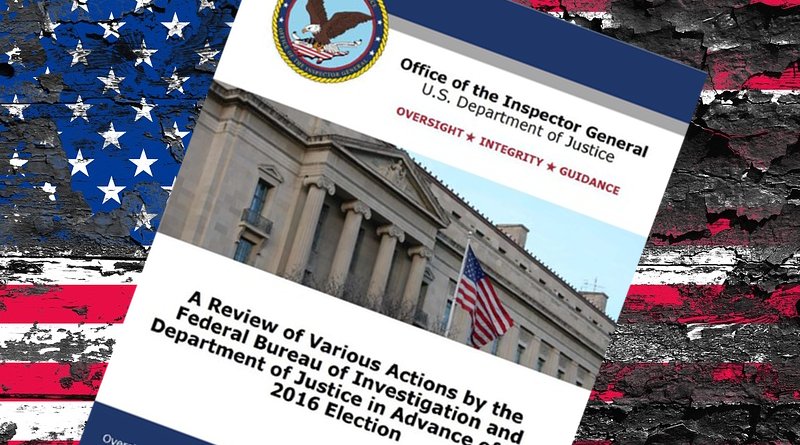 On July 31, 2016, the FBI opened an investigation into whether Donald Trump or his associates were coordinating with Russian interests to sway the 2016 presidential election. Dubbed Operation Crossfire Hurricane, this investigation since then has been the subject of numerous accusations of wrongdoing, invasions of privacy, and conspiracy. The Office of the Inspector General, reacting to these recriminations, began a lengthy investigation, the findings of which have now been released.

There are no smoking guns and no rolling heads, at least this week. In bland style, the report recounts the supervision areas of numerous actors, and how each seemingly followed protocol and reached decisions by consensus. Yet here are some interesting nuggets for those who enjoy panning for political gold.

The report describes the FBI’s relationship with Christopher Steele, the British intelligence officer who was behind the production of the dodgy dossier that began the whole Trump-Russia saga. The IG’s executive summary points out that, while the FBI considered Steele an asset, the Brit considered himself contracted only through his company. This subtle distinction raises interesting questions about where his loyalties may lie.

As the summary states:

“Steele’s handling agent told [IG investigators] that when Steele provided him with the first election reports in July 2016 and described his engagement with Fusion GPS, it was obvious to him that the request for the research was politically motivated.”

And yet the FBI still used this material as a central pillar of its investigation. The FBI was aware that this was opposition research, produced by a man working directly for a company that had been hired, in this case, to literally end an opponent’s political aspirations. But as the IG report explains, “The fact that the FBI believed Steele had been retained to conduct political opposition research did not require the FBI, under either DOJ or FBI policy, to ignore his reporting.”

As special counsel Robert Mueller discovered, there was no Russian collusion by either President Trump or members of his campaign. So was the FBI played by a slick conman? Or was its analysis of the information so poor that, years later, we are still asking how this happened.

The IG details how the Steele report was used to obtain FISA warrants, and this finding may yet lead to even further investigations. The IG declares:

“We identified multiple instances in which factual assertions relied upon in the first FISA application were inaccurate, incomplete, or unsupported by appropriate documentation, based upon information the FBI had in its possession at the time the application was filed. We found that the problems we identified were primarily caused by the Crossfire Hurricane team failing to share all relevant information with OI…”

And who was the lead agent in operation Crossfire Hurricane, as the Trump-Russia investigation was code-named? Peter Strzok, a man who boasted of having an insurance policy against the Trump presidency.

Despite detailing “at least 17 significant errors or omissions in the Carter Page FISA applications,” among many other issues, Horowitz fails to point the finger of blame. His report declares that it “did not find documentary or testimonial evidence of intentional misconduct on the part of the case agents,” a recurring sentence that litters the pages. “Documentary or testimonial evidence” may appear to those who have been demanding answers for the last two years as very thin gruel indeed.

Many loose threads hang in this report. Vague recommendations to tighten up reporting procedures within the FBI may leave a bitter taste in the mouth of those who question why bias, omission, cover-ups  — all documented in the report – are not met with sterner punishment.

It would take a magnanimous soul not to suggest that this is little more than government officials and agencies providing cover for their bureaucratic compatriots.