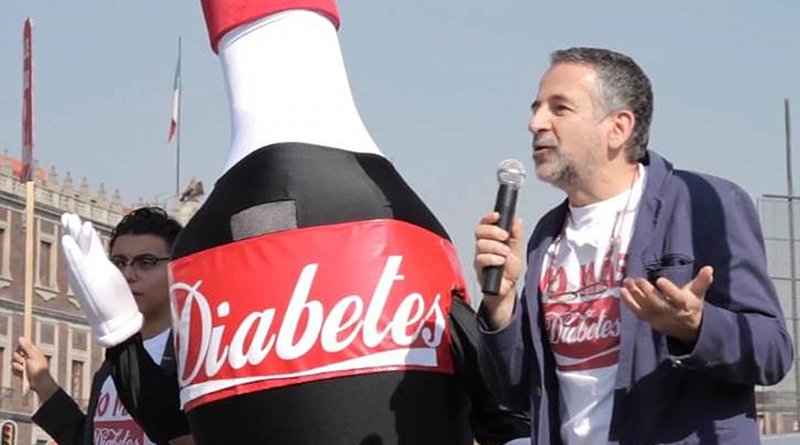 Mexico’s high murder rates, caused by a spike in the illegal drug trade, are making headlines around the globe. But there is another killer at work in the country, claiming five times as many lives as drug gang activity – diabetes.

On 7 December, a documentary about the phenomenon premiered at the Global Health Film Festival in London. El Susto, the name of the film, is a word describing shock or deep grief. Many Mexicans believe this to be the cause of diabetes. But, as the film’s director Karen Akins made clear to the audience, the true culprit is Mexico’s high-sugar diet, fueled by cheap sodas and imported processed foods.

The film opens with stark images of Coca-Cola bottles, Cheeto snack packets and frozen pizza placed on graves by mourning relatives, who honour their dead family members by bringing them their favourite food. Simon Barquera, director of Mexico’s Institute for Public Nutrition, describes vividly how the country’s signing of the NAFTA trade agreement in 1994 opened doors for international food giants keen on finding new markets for their products.

Research undertaken at the institute has found that, since the 1980s, Mexicans eat 30 per cent less homegrown fruit and vegetables. But their consumption of highly processed food has shot up by 40 per cent. Now, the country holds the sad record of having the highest diabetes death rate in the world.

The film pulls no punches when it comes to the part played by drinks giant Coca-Cola. The sugary soda drink is everywhere – even school gyms and rural clinics carry its branding. A large, semi-permanent advertising truck has taken position opposite the ministry of health, and Mexico City’s largest Christmas tree is sponsored by the brand.

When asked by SciDev.Net for a response to this, Coca-Cola Mexico said that 45 per cent of its products were now low calorie or calorie-free, and that the calorie content of Coca-Cola original had been reduced by 30 per cent in the last three years. A spokeswoman pointed to the company’s marketing policy which states: “TheCoca-Colacompany will not place any of our brands’ marketing in any media which directly targets children under 12.”

However, advertising by drinks companies is clearly having an effect. Mexicans consume an astonishing 167 litres of soda per head per year, and 70 per cent of their sugar intake comes from beverages. Akins points out that soda is a cheap treat that even the poorest can afford. “It’s your reward at the end of a long day,” she told the audience. “You don’t have much money, you’re struggling, you work hard – but at least you have that.”

Some of the subjects in El Susto seem almost addicted to the stuff. Akins interviews one woman who drinks six litres of Coca-Cola a day. She speaks candidly about how she must have caught “El Susto” when her mother died, then admits that she keeps drinking because “I never feel it’s enough, I never feel full”.

Many fizzy drinks sold in Mexico and elsewhere are not sweetened by cane sugar but by fructose, which Akins says is addictive and prevents the brain from triggering a ‘stop’ mechanism when the body has had enough. Coca-Cola argues that the high-fructose corn syrup it uses is “fine in moderation”.

Fortunately, a group of activists, many of whom have contributed to the film, took up the fight against ‘big sugar’ and in 2013, Mexico introduced a 1-peso sugar tax on sodas, about 10 per cent of the price of a bottle. The strategy is working – in the year after the tax was introduced, soda sales fell by 7 per cent while consumption of bottled water went up.

But Akin’s film ends on a note of caution. As processed food consumption in western countries is on the decline, food companies are looking for other markets. And the Philippines had become the target of Coca-Cola’s next expansion plans, El Susto warns.