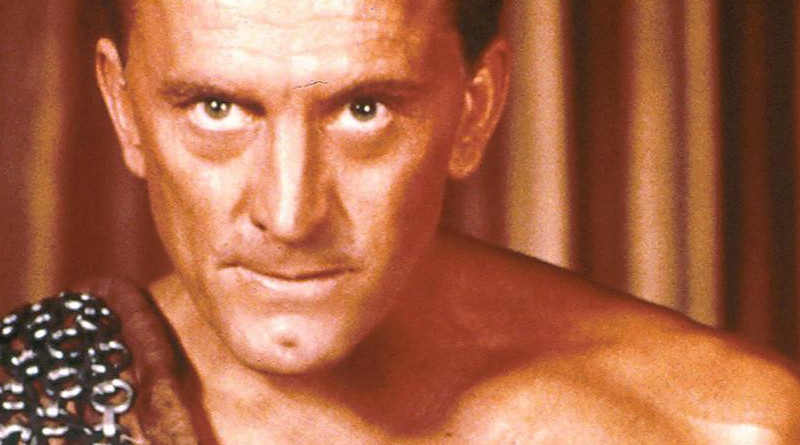 Leaving aside the content of the spectacular, embellished account that became Spartacus, Kirk Douglas, whose life ticked over into a century and a few years, left his own distinct mark on US cultural politics.  At the very least, he managed to fashion a spear to direct through the Hollywood blacklist, an infamous compilation of the supposedly unpatriotic naughties in the film business who had sympathies, proven or otherwise, with communism.  The justified question, however, is how significant his role actually was.  Celebrities and thespians often assume a heft they do not have, a significance they lack.

What was certain was that Hollywood was pullulating with its own host of Red Baiters and the sort that Gore Vidal called American Sissies, all keen to do their bit for the House Un-American Activities Committee.  John Wayne, an old John Bircher, tended to take the lead in that regard, seeing the film industry as a patriotic preserve that did not need any Commie contaminant.

Douglas recalled the chilling effect of the Cold War as it iced writers and actors in a 2015 interview.  His co-star in Detective Story (1951), Lee Grant, was refused work for twelve years after refusing “to testify against her husband before the House Un-American Activities Committee.”

The case of Dalton Trumbo’s ostracising was one that particularly exercised Douglas.  HUAC had eyed him as a notable enough threat (he had been a member of the Communist Party in the 1940s) to require scrubbing from the industry.  He went into pseudonymous territory, scripting Roman Holiday and The Brave One, winning an Oscar for the latter under the name Robert Rich. Along with nine other writers and directors, he made up the Hollywood Ten, jailed for contempt of Congress in 1950 for refusing to collude in the collective hysteria of political cleansing.

When the time came for the release of Spartacus, Douglas, having assumed the role of both protagonist of the film and its direction, insisted that Trumbo’s name appear in the credits.  The act was both testament to the exaggerated quality of protest inherent in film, and the strength of illusions in the Dream Factory.  The masquerade,” concluded Douglas, “was over.”  Despite being told that placing Trumbo in prime position on the credits would terminate his career, “the blacklist was broken.”

Thespians are in the business of stretching the record, and while Douglas, in his own way, made an impression, it was hardly a protest of profound radicalism.  Sizeable pebbles were fashioned, but they remained pebbles.  There was room for some daring.  Besides, Otto Preminger, who directed Exodus, was saddled with a less than negligible contribution against the ban, a point noted in the New York Times, opining in a January 20, 1960 piece that his acknowledgment of Trumbo’s role was “the first open defiance by a producer-director of Hollywood’s ‘blacklist’.”  Exodus was released in December; Spartacus had already been showing since October.

Trumbo’s widow, Cleo, certainly felt that the compass was out of kilter on the point of contributions.  In 1991, when the Writers Guild of America invited her to attend its annual awards dinner, she feared witnessing the presentation of the Robert F. Meltzer Award to Kirk Douglas as the sole saboteur of the blacklist.  At the invitation, she wrote back with a degree of curtness: “It is important to remember it was Otto Preminger who first announced that Dalton Trumbo’s name would appear on his film, Exodus…  This observation is not meant to diminish Mr Douglas’ actions, for what he did required courage, but merely to put them in perspective”.

Cleo went on to suggest that, had her husband still been living to witness this, he would have thought “it unconscionable that Otto Preminger would be ignored and only Kirk Douglas honoured by the Guild for his contribution to destroy the blacklist.  I am also certain that he would not attend a ceremony which sanctioned such a distortion of actual events.”  She did not attend the event.

As she subsequently reiterated in 2002 in a note to the Los Angeles Times, having expressed being “deeply disturbed” by a letter from Jack Valenti, long-time president of the Motion Picture Association of America, it was all a question of balanced agency; “no single person can be credited with breaking the blacklist”.  More, she argued, should be attributed to the daring of the scribes themselves.  “For more than 12 years these men and women continued to write without credit at a fraction of what they had earned before.” They wrote polemics pleading their cause, issued pamphlets, filed lawsuits.  “By the time Trumbo’s name appeared on Spartacus and Exodus the ground had been well prepared by the ceaseless efforts of blacklisted writers.”

In 2012, Trumbo’s daughter Mitzi also weighed in with a corrective in Salon, assembling her mother’s previously directed barbs in an attempt to take some of the polish and shine off Douglas’ claims.  One point of irritation stood out: the bombastic assertions made by Douglas in his book I am Spartacus! Making a Film, Breaking the Blacklist, leaving a record that “has not only inflated his role” but left “incidents that did not happen.”  Mitzi went to work on Douglas, claiming that Trumbo did not lunch with Douglas at the Universal studio commissary, nor attend a screening in disguise.  Nor did that doyen of British cinema, Laurence Olivier, ever dine at the Trumbo household. “He has also asserted a brand-new claim,” she wrote sourly, “that he, not my father, wrote the iconic ‘I am Spartacus’ scene from the film.”

Memories are imperfect repositories, but there is something to be said about those of actors being particularly susceptible.  The actor, after all, is essentially a dissimulator of reality.  Posterity supplies the siren call, and the inventive pen follows.  In the case of Douglas, his role in overturning a sordid episode in US cinematic history was not inconsiderable, but nor was it earth shattering.