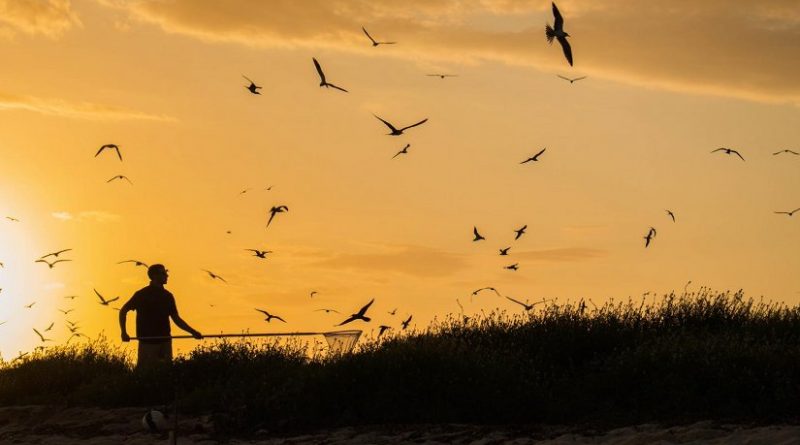 Stronger and more frequent hurricanes may pose a new threat to the sooty tern, an iconic species of migratory seabird found throughout the Caribbean and Mid-Atlantic, a new Duke University-led study reveals.

The study, published this week in the peer-reviewed open-access journal PeerJ, is the first to map the birds’ annual migratory path and demonstrate how its timing and trajectory place them in the direct path of hurricanes moving into the Caribbean after forming over the Atlantic.

“The route the birds take and that most Atlantic-forming hurricanes take is basically the same, only in reverse,” said Ryan Huang, a doctoral student at Duke’s Nicholas School of the Environment, who led the study. “That means these birds, who are usually very tired from traveling long distances over water without rest, are flying head-on into some of the strongest winds on the planet.”

“This is worrying because we know that as Earth’s climate changes, we expect to see more frequent and powerful hurricanes in the future — meaning that the chances of sooty terns being hit by storms will likely go up,” Huang said.

Hurricane season typically lasts from June to November, with peak activity occurring in August and September.

A new map produced by the research shows that sooty terns leave their breeding colony at Dry Tortugas National Park in the Florida Keys each June as hurricane season starts. They migrate southward and eastward across the Caribbean through summer and early fall, before skirting the northern coast of South America and arriving at their winter habitat off the Atlantic coast of Brazil in November.

Huang and his colleagues charted the migratory path by recording and mapping the dates and locations of all sooty terns banded for study at the Dry Tortugas since the 1950s but found dead elsewhere. They also mapped locational data retrieved from birds that were fitted with satellite-telemetry tracking tags. When they overlaid all this data with maps of hurricane paths from the same period, they discovered a striking correlation.

“What’s really interesting is that it’s not just the big category 4 and 5 storms that can kill large numbers of birds. A series of smaller, weaker storms may have the same impact as that of a single large, strong storm,” Pimm noted. “In September 1973, Tropical Storm Delia, a small storm in the Gulf of Mexico, killed a lot of birds because they were in the wrong place at the wrong time.”

Although sooty terns are neither rare nor endangered — 80,000 or more of them are estimated to breed in the Dry Tortugas each year — they have long been used by scientists as an indicator species to determine the health of the region’s marine environment.