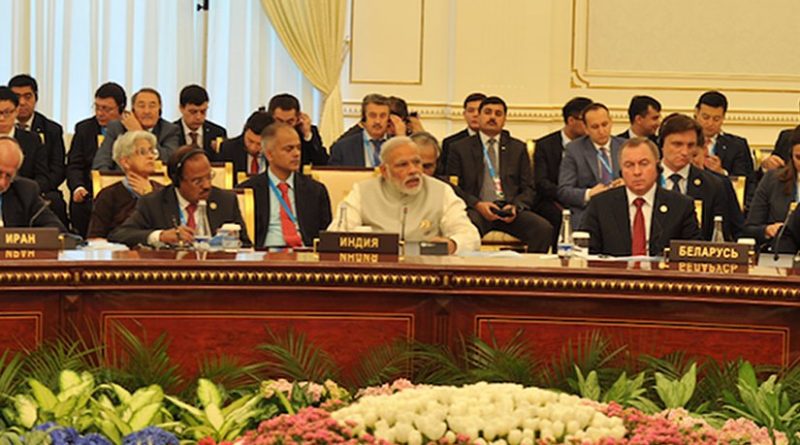 Tashkent and Seoul were both in the news in the last week of June, for events which may have set in motion changes with far-reaching consequences for power equations in Asia and the Asia-Pacific. Hence, the two cities may well be remembered as the trigger-point of developments on which Sino-Russian strategic partnership may have an impact.

Seoul was the venue for the Nuclear Suppliers Group (NSG) plenary, which frustrated India’s attempts to gain entry. Around the same time, although Tashkent was witness to more momentous events, the bilateral meeting between Indian Prime Minister Narendra Modi and Chinese President Xi Jinping stole the thunder. Only because the Modi-Xi meeting was about India’s bid for NSG membership, widely publicized as enjoying unstinted U.S. support.

Yet the big picture showing in Tashkent was the summit of the Shanghai Cooperation Organization (SCO), for which Xi was there primarily. This was a landmark summit, for it was here that the SCO opened its doors to embrace India, Pakistan and Iran as full members.

The second big thing in Tashkent, which Washington and U.S.-led nations may have followed with greater interest, is the meeting between Xi and Russian President Vladimir Putin. As important as the meeting was Xi’s affirmation that the two countries are pledged to support and defend the core interests of each other.

In other words, Russia and China may speak and act as one in the unfolding U.S.-led rebalance strategy in Asia, in Eurasia and Eastern Europe, and in other hot spots such as the South China Sea, the Middle East and Ukraine. While this may not be music to Washington, the U.S. has no reason to be unduly worried, for it shares common interests with both China and Russia.

Unlike the U.S., India – which is entering the China-dominated SCO and hosting the BRICS Summit in Goa in October – may have to contend with the joint force of Sino-Russian power, should it choose to escalate its confrontation with China (over the NSG membership).

The Xi-Putin meeting in Uzbekistan took place on the eve of Putin’s state visit to Beijing on June 25. This was Putin’s fourth mission to China since Xi became president in 2013. The two heads of state vowed to “unswervingly deepen their comprehensive strategic partnership of coordination”. They also agreed to step up mutual support and boost “political and strategic mutual trust”.

This is the 15th year of the China-Russia Good-Neighbourly Treaty of Friendship and Cooperation; and, it also marks the 20th anniversary of the two countries forging the strategic partnership of coordination. “China and Russia should support each other on issues concerning core interests and constantly strengthen political and strategic mutual trust,” Xi said.

The significance of their pointed reaffirmations cannot be lost on neighbouring countries, particularly India with which the U.S. is seeking to strengthen military cooperation. It goes without saying that the two pivotal players may work together in forums such as SCO, BRICS and Russia-India-China (RIC) Meeting where India has high stakes.

As Russia and China go about aligning their interests for mutual strategic advantage, India has to take a closer look at its own options and opportunities. For instance, the Eurasian Economic Union (EEU) – with which China is ready to align as proposed by Russia – shows that the two are looking at big targets. At a time when the European Union is coming apart, the emergence of the EEA combined with China’s forays into Central and Eastern Europe (CEE), with Russian backing, may challenge some of the settled arrangements in Central Asia as well as Europe.

This kind of strategic cooperation and coordination for “striking together” by two big powers is, perhaps, unprecedented. Yet at this juncture, history has turned the tables. Russia, once the greater power, is somewhat overshadowed by China, which is today the world’s second largest economy. China is also clubbed with the U.S. as “G2” — a position once held by the erstwhile Soviet Union though by default. And, China’s power is growing.

In any partnership, one partner is more equal than the other. While there is no doubt that China and Russia would do whatever it takes to adjust to and accommodate each other’s interests, there are areas which might test their resolve and cohesiveness. For example, the Belt and Road project runs through areas that fell within Russia’s sphere of influence; as does, Central and Eastern Europe.

It is possible, but not necessary to list out such areas, to underscore that China and Russia might have to work harder at reconciling their respective aims and ambitions in the interests of the larger objectives of their partnership.

*Shastri Ramachandran is an Indian journalist and commentator. He can be contacted at [email protected]. This article first appeared on July 1 in china.org.cn with the headline Sino-Russian relations: higher, stronger. It is being reproduced with the author’s permission.