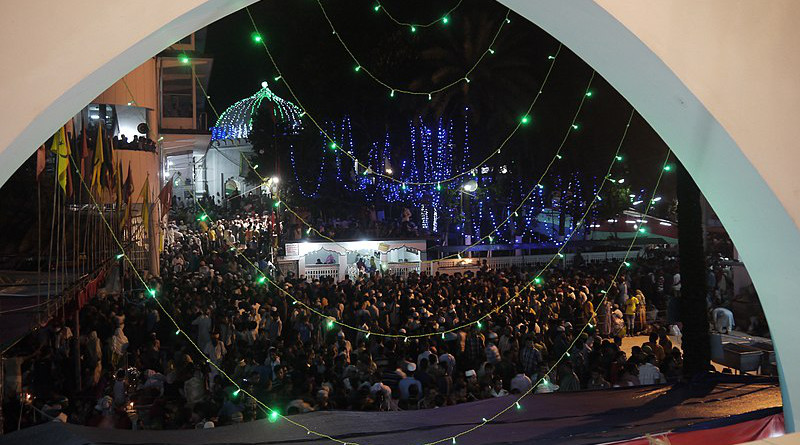 Bangladeshi counterterrorist police said Tuesday they had arrested five suspects and foiled a plan by a pro-Islamic State militant faction to attack a shrine to a Sufi saint in Sylhet city.

The suspects, identified as members of Neo-JMB, were also wanted in connection with the explosion of a home-made bomb in Dhaka’s Paltan area on July 24, according to officials with the Counter-Terrorism and Transnational Crimes unit at Dhaka Metropolitan Police. In addition, the five were allegedly linked to an attempted bomb attack the following night.

“The arrested militants had a plan to attack the shrine of Hazrat Shahjalal. We foiled it,” Sylhet Metropolitan Police Commissioner Golam Kibria told BenarNews. Sylhet, in northeastern Bangladesh, is about 240 km (150 miles) from Dhaka.

Hundreds of devotees visit the holy shrine of Sufi saint Hazrat Shahjalal each day and the leaders of the nation’s two major political parties traditionally kick off their election campaigns by offering prayers at the shrine. In 2004, Harkatul Jihad al-Islami Bangladesh militants hurled a grenade on then-British Ambassador Anwar Choudhury during his visit to the holy site.

Police on Tuesday identified the suspects as team leader Sheikh Naimuzzan along with Sayem Mirza, Rubel Mahmud, Abdur Rahim Jewel and Sanaul Islam. Two of the suspects are university-level students.

“We led raids at different places in the Sylhet Metropolitan area and finally captured the suspects,” Saiful Islam, a deputy commissioner with counter-terrorist police, told BenarNews.

Police said they had been on high alert since mid-July after receiving information about potential terrorist attacks at significant locations including shrines, mosques and other religious sites.

Abdul Mannan, an additional deputy commissioner with the unit, said terrorists had not been idle during the COVID-19 pandemic.

“Our intelligence shows [that] militants used the virtual world for motivating and recruiting members during this pandemic. But, they are not in a situation to carry out any big attack now,” Abdul Mannan told BenarNews.

Bangladesh has been hit by a series of militant attacks in the last 12 months.

On Aug. 31, 2019, a remote-controlled bomb blast in Dhaka injured three people. More recently, police have been hit by bomb attacks since April 29 when three were injured. A similar attack on June 26 left two injured. Police located and detonated two bombs on July 23.

The SITE Intelligence Group, a U.S.-based firm that monitors online communications among Islamic militant groups worldwide, reported that the IS claimed responsibility for those attacks even as government officials denied its existence in Bangladesh.

Neo-JMB was blamed for Bangladesh’s worst-ever terrorist attack, an overnight siege at the Holey Artisan Bakery cafe in Dhaka in July 2016. The attack, claimed by Islamic State, left 29 people dead. They included 20 hostages who were hacked to death with machetes by five young gunmen, who were killed when government security forces raided the café on the morning of July 2.