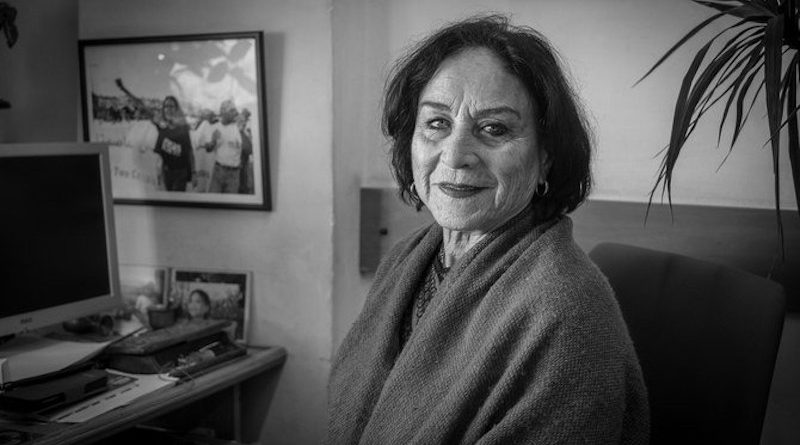 Lea Tsemel is an Israeli lawyer known for her work in support of Palestinian rights. (Wikimedia Commons)

“Advocate,” directed by Rachel Leah Jones and Philippe Bellaiche, is a candidate in the best documentary and outstanding politics and government documentary categories. The winner will be announced on Sept. 28.

The two-hour documentary premiered at the 2019 Sundance Film Festival, and went on to win awards from Human Rights Watch, Israel’s Docaviv Film Festival, and festivals in Hong Kong and Poland. It was shortlisted for an Oscar in 2019.

However, its theater premiere came at an inopportune time, January 2020, when coronavirus began sweeping the world and cinema attendances plummeted.

“Advocate” is a powerful depiction of how Israel ignores the rule of law. The documentary has been attacked by many in Israel, including Culture Minister Miri Regev, who has been a harsh critic of Palestinian human rights.

However, criticism of the film only exposes the fallacy of Israeli claims that it is a democracy, with free speech and opposition to censorship. When it comes to Christians and Muslims, and Israelis such as Tsemel who prefer to tell the truth, Israel makes a mockery of the term “democracy.”

I have followed Tsemel’s career and the challenges she has faced since I was a young activist and writer. It was always amazing to me how an Israeli lawyer would be an icon of the fight to defend the rights of Palestinians rather than Arab attorneys who pretty much have remained silent on the sidelines.

The 76-year-old Tsemel has demonstrated how when the rule of law is violated, the legal system can be used to exact justice in a country where the law is applied differently to two peoples.

Regev has fought to prevent the showing of the film, which exposes the ugly truth behind the facade of “democracy” — in reality the quintessential foundation of modern-day apartheid.

To see someone such as Regev, who is seeking to revive Israel’s campaign of murdering of Palestinian resistance leaders, angry with the Tsemel film is reason enough for me to want to buy it, watch it, share it and write about it.

The Arab world has never really understood the power of film. From documentaries to movies, film has defined the Western understanding of the Middle East conflict.

The basic understanding of the Israel-Palestine conflict was burned into the minds of Americans in the early 1960s by the film “Exodus,” produced from a work of pure fiction by Leon Uris. The lies, exaggerations and untruths that filled that movie forever sealed how Americans see the conflict.

The Arab world has never recognized that it is not fighting a battle of truth, but rather a war with a stereotype that was burned into the public’s mind by a movie that romantically embroidered lies, distortions and falsehoods in order to demonize a just and moral cause.

Tsemel calls herself a “rebel with a lost cause,” and says that she “always sees the person behind the case,” the mantra of a true professional attorney who embraces the core of democracy and the belief that everyone is innocent until proven guilty in a forum defined by the rule of law, not the rule of mobs or politics.

In a way, Tsemel is a Jew who is doing what the Nazis refused to allow attorneys to do during the Holocaust — defending Jews accused of terrorism by the Nazi regime. To represent the people that the regime asserts are the embodiment of evil is the most righteous principle someone can embrace. In the early 20th century, it was Jews. In the late 20th century and early 21st century, it is Palestinians.

Tsemel said she volunteered with the Israeli military during the 1967 war and was the first Israeli woman to be pictured at the Wailing Wall when it was captured. Many weeks later, she said she was shocked to learn that Israel had destroyed all the Palestinian homes near the wall to make a plaza. The occupants of the homes were forced to flee.

She notes how Palestinians accused of crime are demonized and judged before they are even taken to trial, if they get to trial. But Israeli Jews who commit similar crimes are given the full protection of the law. That double standard often motivates human beings to pursue moral advocacy.

The documentary is a beautiful film that tells the story of a pure heart who wants to do good, but soon discovers the wrongs that are all around. She wants to change that, and her life is forever defined by her struggle.

It is an emotional film because every suspect she represents is defined by the Israelis as a “terrorist.” You listen as Israelis scream curses and wish death upon Arab suspects who are lying bleeding in the streets with no help, already convicted by stereotype, not facts or laws.

The film is in Hebrew and Arabic with English subtitles.