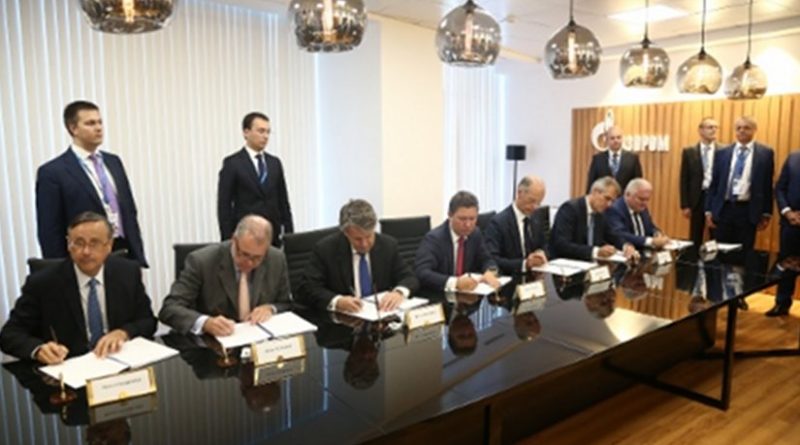 A key Shareholders Agreement to construct the Nord Stream II gas pipeline for boosting gas supplies to the European Union was signed on Monday.

The project will be implemented by the New European Pipeline AG joint venture. According to the document, Gazprom will own a 51 per cent share in the joint project company, while E.ON, Shell, OMV and BASF/Wintershall will have ten per cent each, and ENGIE – nine per cent.

The Nord Stream II project envisages the construction of two offshore strings with an aggregate annual capacity of 55 billion cubic meters of gas, to be laid from Russia to Germany across the Baltic Sea. The project will use the proven experience of Nord Stream with its safe and reliable gas infrastructure.

“Nord Stream II will double the throughput of our up-to-date non-transit route via the Baltic Sea. It is important that those are the new gas volumes, which will be sought for in Europe due to the continuous decline in its domestic production.

The fact that the global energy majors participate in the project bespeaks its significance for securing reliable gas supply to European consumers,” said Alexey Miller.

“For more than 20 years BASF has been participating in the construction of pipelines to ensure the secure supplies of Russian gas to Europe. We want to bring our expertise to the expansion of Nord Stream and look forward to working with Gazprom and the other partners on this important infrastructure project,” said Kurt Bock.

“With the expansion of Nord Stream we will further secure reliable natural gas supplies for Germany and the EU in the long-term. This project will strengthen our more than 40-year-lasting successful partnership with Gazprom,” said Klaus Schaefer.