(EIA) — After falling steeply from its 2007 peak, U.S. motor gasoline consumption will likely continue to decline in 2012 and 2013, albeit at slower pace, according to the U.S. Energy Information Administration’s (EIA) newly released Short-Term Energy Outlook (STEO). There may be more downside than upside uncertainty in the forecast, however, as the strong rate of recovery expected for new car sales in 2012 and their higher fuel efficiencies could lead to greater-than-expected improvements in average fleet fuel efficiency.

U.S. motor gasoline consumption fell sharply between 2007 and 2011. In 2008, consumption fell by 300 thousand barrels per day (bbl/d) from the previous year, as high retail gasoline prices that persisted through October 2008 and the recession reduced highway travel. Consumption flattened in 2009 and 2010, but then dropped by 240 thousand bbl/d in 2011 as high gasoline prices contributed to the dampening of travel for most of the year. The latest STEO projects that gasoline consumption will fall by 20 thousand bbl/d (0.2 percent) annually in 2012 and 2013 (Figure 1), as modest growth in highway travel is more than offset by continuing improvements in the average vehicle fleet fuel economy. 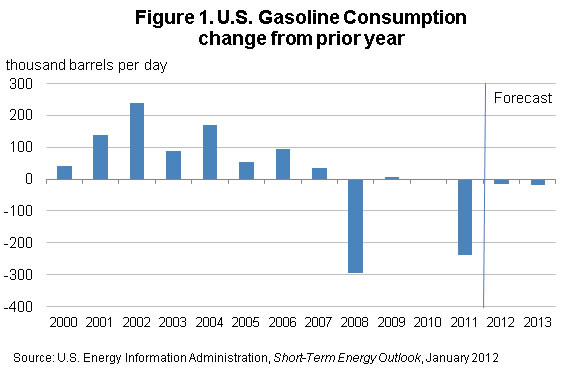 Population and economic growth, the rate of unemployment, and fuel prices influence vehicle miles traveled. Fleet efficiency, which changes slowly based on the efficiency of new vehicles relative to that of the existing fleet and the rate of fleet turnover, links miles traveled to fuel use. STEO, which has been extended through 2013, projects highway travel will grow at an annual average rate of 0.6 percent, and vehicle fuel economy to continue to increase at a 0.9-percent rate over the next two years. While the 27-percent increase in gasoline retail prices in 2011 had a significant impact on consumption (see This Week in Petroleum , August 31, 2011), prices in 2012 and 2013 are not expected to change appreciably from last year’s average. Retail regular motor gasoline prices are projected to fall by 1 percent in 2012 and then rise by 2 percent in the following year.

The driving-age population is experiencing a major shift. The total population between the ages of 15 and 64 is projected to grow at an average rate of only 0.7 percent over the next two years, compared with an average 1.3-percent annual growth rate during the period of 1991-2000. In contrast, the total population of drivers 65 years old and over, who drive substantially less than those between 15 and 64 years of age, is projected to increase at an average rate of 3.5 percent, up significantly from the annual average growth rate of 1.2 percent during the period of 1991-2000. Assuming that unemployment rates and retail prices remain close to current levels, EIA expects highway travel growth to be almost a third of GDP growth annually in 2012 and 2013.

Gasoline prices move higher for a third week in a row

Home » US Motor Gasoline Consumption Patterns In Near Term – Analysis