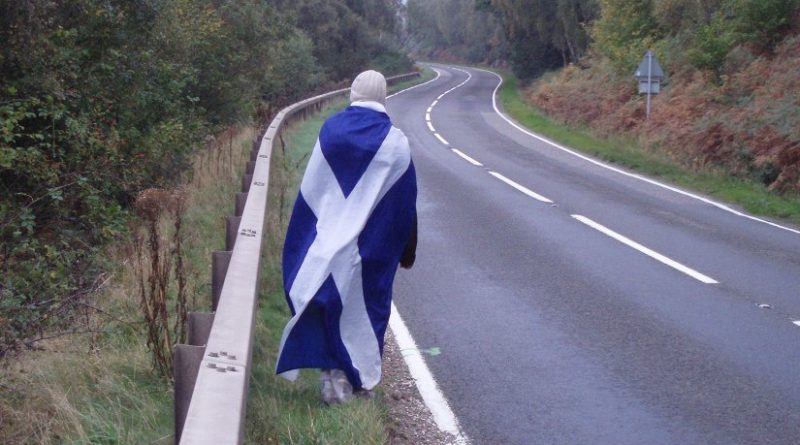 Trump wants to get in. Scotland wants to get out. That sounds a bit odd. Let me explain. A few days ago, the first minister of Scotland, Nicola Sturgeon, said she’d heard that one of the White House’s planes had asked for permission to land in Glasgow airport a day before the inauguration of the new president, Joe Biden. She said she had refused it. The surmise was that Donald Trump wanted to escape to one of his favourite golf courses, near where his mother was born.

A firm and growing majority of Scots want to leave the United Kingdom and for their country to return to the European Union. They feel badly done by since a significant majority voted in the British referendum on membership to stay in the EU (Brexit). In fact, it was only England that produced the majority leave vote. Now Nicola Sturgeon has promised that after the coming Scottish parliamentary election in May she will propose a referendum to decide whether to leave the UK or not.

UK Prime Minister Boris Johnson has said that he will not allow that to happen. He argues that without the central government’s sanction Scotland cannot leave. Why not? If Scotland – as did white-ruled Rhodesia (now Zimbabwe) in 1965 – proclaims a unilateral declaration of independence what can Johnson do? Send in the troops to wage war with fellow countrymen? Such a move would be politically impossible.

Impose sanctions? But given the degree of interlocking trade and a common currency, that would hurt England nearly as much as it would hurt Scotland. For starters it could lose Scottish oil, gas, whiskey, wind energy and water. Over 40% of Scottish exports go to the European Union and Scotland could increase that. Scotland in recent years has been the most successful part of the UK outside London in attracting foreign investment. It runs a trade surplus. These days it can borrow almost unlimited funds on the international market at an interest rate of less than 1%.

The Act of Union that joined Scotland to England was in 1707. Over the years they were amicably joined at the hip. The Scots retained their own legal and educational systems. In recent years much more power, including health and transport, has been devolved to a relatively new Scottish parliament and executive. If push came to shove, Scottish courts undoubtedly would rule in favour of independence.

Much of Scottish history is painful to remember. There were the terrible “Clearances” which began in the middle of the eighteenth century and which allowed loyalist landlords to expel their peasant inhabitants in favour of sheep. This move left more Gaels in Canada and the US than in Scotland. It also led to the creation of massive slums in Glasgow and Edinburgh. Glasgow has never recovered from this. Life expectancy is markedly lower than in any other European nation. It has the highest rate of criminality in the UK.

“There are many theories on the essence of nations as there are theorists”, writes Norman Davies in his magisterial book, “Europe”. “But the essential qualities seem to be spiritual in nature. ‘The nation is a soul’, wrote Ernest Renan, ‘a spiritual principle. It consists of two things. One is the common legacy of rich memories from the past. The other is the present consensus, the will to live together.’”

Nevertheless, one can reasonably wonder why such consciousness took so long to develop in Scotland. Why didn’t an effective national movement develop in the nineteenth century? After all the Scots underwent intense modernization at an early date.

The answer must lie in the divisions between the Highland Gaelic and Lowland elements within Scottish culture which impeded the growth of a common identity, and partly in the powerful attractions of British state nationalism. Glasgow and Edinburgh thrived from the enterprises of the British Empire. Scotland’s attachment to a successful union did not fade until the empire did.

The inventiveness and imagination of Scots continues in the modern age- J.K. Rowling, author of the Harry Potter books, the world’s best-selling fiction writer, and that most famous of actors, Sean Connery, who created on screen James Bond.

Scotland is a small country with a population of 5.5 million – nearly the same as Denmark. But in inventiveness it leaves most countries behind. In recent years the Scots have realized how good they are.

It is no surprise that Scottish-born Gordon Brown, the prime minister of the last Labour government has said, “Scotland already has one foot out of the door. … In ten years’ time the UK could follow the British Empire into the history books as an anachronism”.

Parliamentary elections are coming up in May. The Scottish National Party expects to handsomely win a fourth consecutive term. Then Ms Sturgeon will move to hold a referendum on independence. In all likelihood the vote will be “yes”.

Brexit was a move built on government and campaigners’ lies. Scotland’s exit from the UK and into the EU will be a move based on truths.

* Copyright: Jonathan Power. The writer was for 17 years a foreign affairs columnist and commentator for the International Herald Tribune. Visit his website: www.jonathanpowerjournalist.com

Home » Rationale For Scotland Returning To The European Union – OpEd