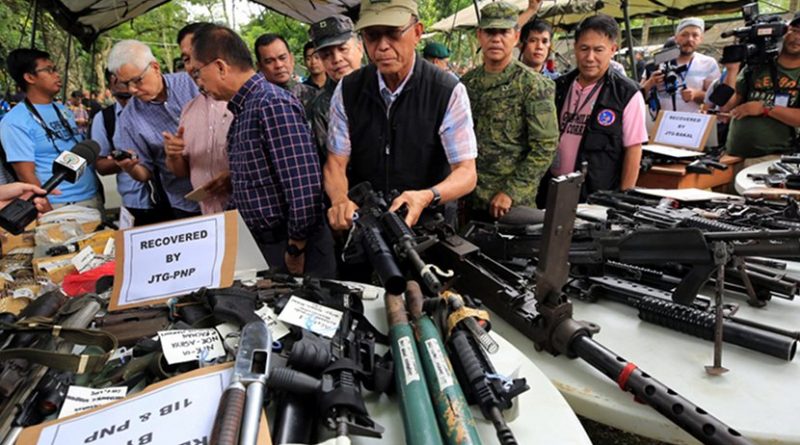 In the three months since the jihadists of the ISIS-linked Maute group were routed by Philippine troops in Marawi, another radical band of Islamists have risen from the shadows to take their place as the vanguard of Islamic State in western Mindanao. Since the five-month siege of Marawi ended in late-October, the Bangsamoro Islamic Freedom Fighters (BIFF) have launched a wave of IED attacks and regularly clashed with security forces, whilst their de-facto leader Esmael Abdulmalik has been touted as a possible replacement for slain Abu Sayyaf militant Isnilon Hapilon as ISIS’ new emir in Southeast Asia.

In the post-Marawi climate of heightened threat awareness, the BIFF’s recent spike in activity has garnered an increasing amount of attention not only in the Philippines, but across the wider region as well. Yet the group has been around for almost a decade and has been involved in high-profile incidents before, notably the Mamasapano clash of January 2015 which left 44 Special Forces soldiers dead and sent shockwaves throughout the country. The BIFF has also claimed responsibility for bomb attacks in the past, whilst a small cohort of its fighters are thought to have taken part in last year’s Marawi siege.

What underlies the BIFF’s intensified campaign of terror? And how has this previously little-known militant group emerged from being a mere footnote in Mindanao’s long-running armed Islamist insurgency to positioning itself as the last bastion of ISIS’ ambitions to carve out a regional caliphate?

The BIFF has its roots in the decades-old Muslim separatist insurgency which has been fought on the Philippines’ conflict-plagued southern island of Mindanao since the early 1970s. In its initial stages, the insurgency was fought by the Moro National Liberation Front (MNLF) founded by Nur Misuari, and later by the Moro Islamic Liberation Front (MILF) founded by Hashim Salamat, which broke-off from the MNLF in 1981. Both organizations enjoyed support from large sections of the Muslim population in the Mindanao region, which has long suffered from underdevelopment and high rates of poverty in comparison to other parts of the majority-Catholic country, leaving its residents feeling marginalized.

Kato was succeeded as leader by Mohammad Ali Tambako after suffering a stroke in 2011, yet Tambako left to establish another militant group two years later. Kato died of natural causes in 2015 and the BIFF appointed Ismael Abubakar as its new figurehead, signalling a new era in which the group separated into factions and became more of a splintered guerrilla organization than a co-ordinated or hierarchical group. The BIFF remains loosely-structured today, and is not thought to have a defined leadership structure or central chain of command.

The ISIS factor. Amidst uncertainty over its direction and leadership, the group pledged allegiance to Islamic State in late 2014. At the time, this was not viewed as a concern by the authorities and was seen as more of an attention-grabbing ploy aimed at aiding recruitment and boosting the group’s profile. This view changed suddenly in May last year, when militants from the ISIS-aligned Maute and Abu Sayyaf groups launched a brazen assault on the city of Marawi. The threat from ISIS had become visible, having materialized itself on a large scale in Southeast Asia for the first time. The Marawi crisis led the security forces in Mindanao to take pledges of allegiance to ISIS by smaller militant groups far more seriously.

The jihadists from the Maute group and Abu Sayyaf took five months to dislodge. In mid-October, the Philippine military announced the end of the siege after the deaths of militant leaders Omar Maute and Isnilon Hapilon in the main battle zone. More than 900 militants were killed in total, dealing a serious blow to Abu Sayyaf’s capabilities and virtually destroying the Maute group as a fighting force. Whilst a small number of the BIFF’s members were thought to be present in Marawi, many of the group’s fighters remained in its heartlands elsewhere in western Mindanao. These BIFF fighters now constitute the surviving remnants of ISIS in the southern Philippines, and have taken up the mantle vacated by the Mautes with a renewed sense of purpose and authority.

Since the end of the Marawi siege, clashes between government forces and the BIFF have intensified in the provinces of Maguindanao and North Cotabato, where the group has its rural strongholds. Government airstrikes, ground offensives and gun battles resulted in the death of 28 BIFF members in the final three months of 2017, whilst two government troops were also killed. In December, the BIFF launched a series of attacks targeting the indigenous Teduray tribe whilst attempting to seize pockets of territory in rural villages in Maguindanao province, setting fire to houses and killing several tribe members whilst driving thousands more from their homes. The BIFF has also launched a spate of bomb attacks targeting police patrols, military bases, and civilians. On New Year’s Eve, the militants detonated an IED outside a crowded bar in Tacurong city, killing two civilians and injuring twelve, having earlier in the day killed one and wounded five policemen in a bomb blast in Datu Hoffer town.

The BIFF remains split into at least three main factions, the largest and most active of which is led by Ismael Abdulmalik, also known by the alias Abu Turaife. In a particularly worrying development, the Armed Forces of the Philippines (AFP) has reported seeing ‘foreign-looking’ gunmen fighting alongside BIFF militants in Maguindanao province, indicating that terrorist fighters from elsewhere in Southeast Asia may have joined-up with the group. It is possible that surviving Maute group members, including a number of Indonesians and Malaysians believed to have fought in Marawi, may have bolstered the BIFF’s ranks. At present, the BIFF appears to be the new group of choice for the region’s militants.

Local authorities have said they are monitoring the recruitment activities of jihadist groups in western Mindanao and are bracing themselves for another Marawi-style attack. Cotabato city has been mentioned as a possible second target. President Duterte has responded by extending Martial Law in Mindanao until the end of 2018 and has promised to destroy the BIFF, whilst recently-installed military chief Lt. Gen. Rey Leonardo Guerrero has vowed to redeploy resources from Marawi to tackle Islamist groups across the south. Mindanao’s civilian population remains on edge as its security forces maintain a heightened state of alert, having conducted several urban warfare training exercises in recent months to prepare for a repeat of Marawi. The authorities do not want to be caught off-guard again like they were last May.

The BIFF poses a threat to Mindanao’s peace process. The rise to prominence of radical groups such as Maute, and now the BIFF, comes at a crucial stage in the southern Philippines’ drawn-out peace process with the MILF, which has laid down its weapons since a provisional peace deal with the government was signed in 2014. Currently, lawmakers are debating the proposed Bangsamoro Basic Law (BBL) which would pave the way for a new autonomous region in the south to replace the existing Autonomous Region in Muslim Mindanao (ARMM), constituting a final negotiated end to hostilities with the largest groups in the Moro rebel movement.

At present, it is the BIFF which pose the greatest concern going forward. Radical groups such as the BIFF will remain attractive to those who will never accept autonomy and maintain a desire to see a fully-independent Islamic state created in the southern Philippines. This is especially true for those living in the most impoverished areas of Mindanao, who may feel disenfranchised and excluded from the potential benefits that any political settlement may bring.

As long as the underlying conditions of instability remain present in Mindanao, transnational terror groups such as ISIS and aspiring militants from across the region will seek to take advantage of the situation. These links pose the biggest challenge to the ongoing peace process in the Philippines’ troubled south. Despite efforts on both sides to secure a lasting peace, the spread of ISIS’ global ideology to the region continues to aid recruitment, giving new meaning and impetus to the localized battles fought by formerly little-known militant groups such as the Mautes, Abu Sayyaf and now the Bangsamoro Islamic Freedom Fighters.

Gui Congyou, China’s ambassador to Sweden, where China has successful investments recently said: “We treat our friends with fine wine,

‘This Has Happened: An Italian Family In Auschwitz’ – Book Review