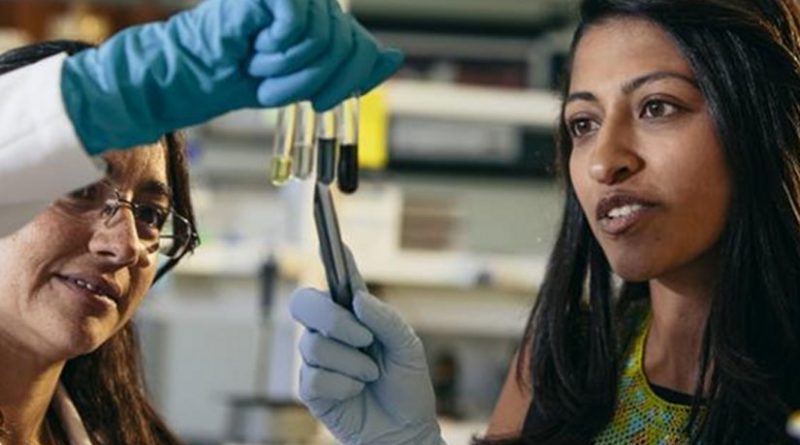 A Montana State University assistant professor of sustainable food systems who has conducted research all over the world is turning her attention to maple syrup.

According to Ahmed, some producers say they are seeing less light-colored syrups historically classified as “fancy grade” and more dark and amber syrups during warm years. At the same time, producers are beginning to tap their maple trees earlier in the year because of sap flow triggered by winter thaw, but also experiencing an earlier end to the maple tapping season with a warming spring. Cold nights and warm days trigger sap flow, and too much warmth brings an end to the season with budding maple trees that make for more unpalatable maple syrup. As a result, Ahmed said, some producers fear that they will ultimately lose money because lighter syrups — that were once considered the highest grades — used to be in the most demand with the best prices. With shifts in composition, the amount of sap required to make maple syrup is also shifting. Maple syrup is an industry worth millions of dollars, Ahmed noted.

Sap’s sugar content determines the quantity of syrup that can be produced from a given amount of sap, Ahmed said, while secondary metabolite defense compounds contribute to the flavor, nutritional profile and health attributes of the syrup. Secondary metabolite compounds are recognized to play a defense role in plants and increase with environmental stress including increased pests and more extreme weather. However, she said the relationship of these factors to environmental variability is poorly known.

To learn more about the relationship between sap quality and environmental factors, Ahmed is co-leading an interdisciplinary, multi-year study as part of the international consortium ACERNet that has taken her and her collaborators across the range of maple forests and sugar bushes of North America from near the southern range of maple in Virginia to its northern range in Quebec, and from the eastern range of maple in New England to near its western range in Indiana. ACERNet collaborators include Ryan Huish from The University of Virginia’s College at Wise; David Lutz from Dartmouth College; Joshua Rapp and Kristina Stinson from the University of Massachusetts Amherst; Toni Lynn Morelli from the Department of Interior Northeast Climate Science Center; and Boris Dufour from the University of Quebec in Chicoutimi.

The ACERNet team closely works with undergraduate students on maple sample collections from the start of the sap flow until its end, generally from February through April.

“The beginning and end of the maple season vary quite a bit from year to year,” said Lutz, a forest ecologist. “Some producers use vacuums to mitigate day-to-day variability, but they always rely on crews to tap trees at the onset of the season. Early seasons are challenging for producers who have to suddenly adapt to changing tapping conditions. Our research crew of undergraduate students are ready to collect ahead of time, but commercial producers don’t always have this luxury.”

The team measures sap flow and sugar content throughout the tapping season and across the maple range. They then send sap samples to Ahmed’s collaborative Food and Health Lab at MSU to analyze the chemical composition that determine maple sap quality along with sugar content.

Ahmed and her collaborators are also engaging with maple producers through interviews and workshops to find out what syrup producers have observed in their sugar bushes during their lifetimes. More than 100 growers, including members of Native American communities, have participated in the study to date, Ahmed said.

Ahmed said she and her collaborators are interested in learning about what maple producers are experiencing and noticing. Then they will compare those observations with their field and laboratory results regarding the impacts of climate variability on sap flow and quality, Ahmed said. The researchers also want to learn how maple producers expect to handle the social, economic and environmental changes that are affecting their operations.

“Continued tapping of maple syrup, and passing on its associated traditional ecological knowledge, is important for food sovereignty of Native American communities,” said Autumn Brunelle, a Native American research associate on the project.

The researchers are also collecting information about weather patterns and other socio-ecological conditions that affect maple trees, said Rapp, a plant ecologist. The team will couple their social, ecological and phytochemical data with climate data to develop models that predict the future of maple syrup production.

“It’s important to know what will happen in the future so growers can manage for the situation and manage risk,” Morelli said.

“There are multiple potential effects of climate and market variability on maple syrup production,” said Dufour, an ecologist from Quebec. “These include the availability and health of maple trees, the timing and duration of the tapping season, sap flow and quality, consumer dynamics and producer livelihoods.”

Preliminary estimates indicate that the sap is starting to run up to two weeks earlier than it did a century ago, Stinson said. The ACERNet team expects that northern states like Vermont and New Hampshire will continue producing syrup far into the future, and that the southern range is the most vulnerable where sap flow is most variable from year to year.

“We are finding that foresters and producers are concerned about the health of maple trees, in particular the effects of acid rain and pest outbreaks. Such abiotic and biotic stressors interacting with climate variability are likely to impact maple production depending on where you are and how you are managing your sugar bush.”

Huish said he sees maple syrup production continuing in the southern Appalachians for a long time.

“Decades for sure, maybe even centuries,” he said. The range of maple trees may move north with warming temperatures, but this is an extremely slow process that will likely take many centuries to be felt, he added.

In the meantime, the ACERNet team predicts there will likely be plenty of trees to tap unless an invasive pest such as the Asian Longhorn Beetle kills the trees.

“However, there could be some threats to the southern populations that could jeopardize successful tapping in the very long-term,” Huish said. “There are some climate projection models that suggest sugar maple may not prefer the climate so much in our neck of the woods in the future. And certain invasive species and diseases may have a stronger negative impact on the southern sugar maples than our more northern populations, exacerbated by climate change.

“Community members here are also feeling the frustrations of increasing unpredictabilities in the weather, and maple tapping is very dependent on the weather for good flow,” Huish continued. “It seems that maples have been tapped earlier and earlier in the season over the years. Many now begin tapping in December or January. It can become a gamble for some producers. One adaptation strategy is to tap other species of maple that may prove to be more resilient.”

Ahmed said the maple syrup study, like a few of her other research projects, was sparked by a conversation with growers about the issues that most concern them.

In 2012, she was meeting with two farmers in their 90s — Albert and Jean Conklin of Vermont — about their experience with agriculture. Ahmed shared information about her research on the effects of climate variability on tea in China. In response to learning about Ahmed’s work with tea farmers, the Conklins shared that they were experiencing something similar with maple. Over their lifetime, they were seeing less of the light colored syrup from their sugar bush that they most preferred, she said.

“Maple syrup is an iconic non-timber forest product linked to regional identity,” Ahmed said. “I was extremely interested in studying the effects of environmental factors on maple syrup after my meeting with Albert and Jean Conklin.”

That interview led to talks with other growers and the first of many offers to taste their maple syrup. Not long after, Ahmed teamed up with other scientists interested in the same questions with maple.

The maple syrup study is now in its third year. The Montana INBRE program and MSU’s Department of Health and Human Development provided funding for the first two years. The Department of Interior’s Northeast Climate Science Center is funding the next two years of the research.

In the future, Ahmed and her collaborators plan to develop a citizen-science component to their study. They hope to involve middle school and high school students to collect sap data and, in the process, motivate the next generation of scientists with real-world questions.

Ahmed has carried out research on a wide range of topics on the ecological, cultural and health aspects of food systems around the world. In addition to the maple syrup study, she is conducting other studies related to agriculture, nutrition and health in Montana, nationally and globally.