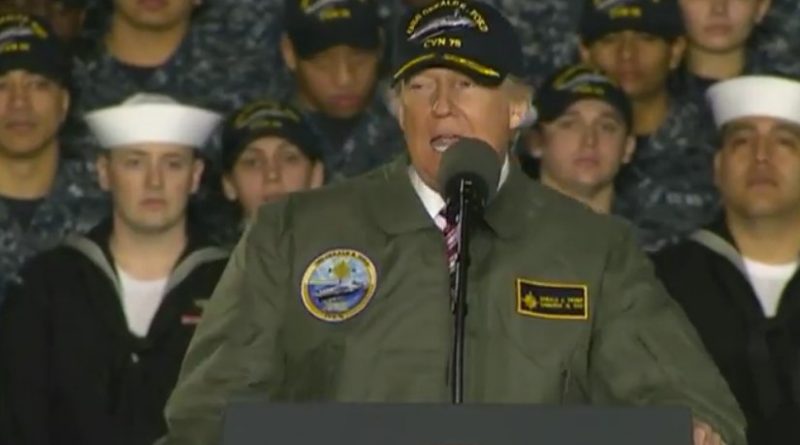 US militarism expanded exponentially through the first two decades of the Twenty-First Century, and was embraced by both Democratic and Republican Presidents. The mass media’s hysteria towards President Trump’s increase in military spending deliberately ignores the vast expansion of militarism, in all its facets, under President Obama and his two predecessors, Presidents ‘Bill’ Clinton and George Bush, Jr.

We will proceed in this essay to compare and discuss the unbroken rise of militarism over the past seventeen years. We will then demonstrate that militarism is an essential structural feature of US imperialism’s insertion in the international system.

Several observations are in order: Obama’s military budget in 2017 excluded spending in several ‘Defense-related’ departments of government, including a $25 billion increase for the Energy Department’s nuclear weapons program. Obama’s total for military spending for 2017 adds up to $623 billion or $30 billion less than Trump’s proposal. Moreover, Obama’s military spending for Overseas Contingency Operations (OCO), which is not listed in the annual budget proposals, included the cost of US wars in Afghanistan, Iraq, Syria, Yemen, Libya and numerous other countries and had skyrocketed during his term. Indeed, Obama’s eight years in office exceeded George W. Bush’s military spending by over $816 billion dollars.

President Trump’s proposed increase in military spending is in line with the Democratic President’s trajectory – contrary to the claims of the mass media. Clearly both Republicans and Democrats have massively increased their reliance on the US military as the driving force of world power. While Obama’s 2017 budget included $7.5 billion for ‘ISIS operations’ (an increase of 50%) and $8 billion for cyber warfare and (counter) terrorism, the largest increase was for stealth warplanes, nuclear submarines and aircraft carriers, clearly aimed at Russia, China and Iran. The Navy and Air Force got three quarters of the budget.

Under Obama, the US escalation of weaponry was not directed at ‘terrorist groups’ but, instead, at Russia and China. Washington has been intent on bankrupting Russia -in order to return it to the vassalage of the pre-Putin decade. The CIA – Obama – and the Republican Partys’ ferocious campaign against Trump is based on his overtures toward Russia. The centerpiece of the decades-long US quest for unipolar domination now depends on stripping Trump of his power and appointments, which in part or whole, are seen as undermining the entire structure of US military-driven imperialism as had been pursued by the previous four administrations.

Trump’s increase in military spending is apparently intended to be a ‘bargaining chip’ in his plan to expand US economic opportunities – cutting deals with Russia, renegotiating trade with China, East Asia (Singapore, Taiwan and South Korea) and Germany, all of which comprise the bulk of the US trillion-dollar annual trade deficit.

Trump’s repeated setbacks, the constant pressure on his appointees and the toll inflicted by the mass media on every aspect of his persona and personal life, even in the face of a historic increase in the stock market across the board, indicates a deep division among US oligarchs over power and ‘who governs’. Not since the onset of WWII have we witnessed fundamental cleavages over foreign policy. Previous conceptions of partisan debates are out of date. The financial press (the Financial Times and the Wall Street Journal) is openly aligned with the militarists, while the financial marketers on Wall Street support Trump’s pro-business domestic policies and conciliatory overtures to Russia and China. Most of the propaganda mills, dubbed ‘think tanks’, with their stables of academics, ‘experts’, editorialists, and liberal and neoconservative ideologues promote military aggression against Russia. Meanwhile, the populist social media, grass roots Trump supporters, domestic manufacturers and the nation’s Chambers of Commerce press for domestic tax cuts and protectionist measures.

The Army is pro-Trump and favors his concept of regional wars for economic gains. In contrast, the CIA, the Navy and Air Force, which benefited significantly from Obama’s lopsided war budgets, pursue a policy of global military confrontations with Russia and China and multiple wars against their allies, such as Iran, regardless of the devastation such a policy will have on the domestic economy.

Donald Trump’s concept of imperialism is based on exporting products and capturing markets while attracting multinational corporation capital back to the US for re-investing their profits (currently over one trillion held overseas)in the domestic market. He opposes economic and military alliances that have increased US trade deficits and debt in contrast to the previous administrations of militarists who accepted crippling trade deficits and disproportionate US spending on military intervention, bases and sanctions against Russia and its allies.

President Trump’s goal of making Western Europe pay a greater share of NATO (and thus reduce Europe’s dependence on US military spending) has been rejected by both political parties. Every one of Trump’s small steps toward improving relations to Russia has aroused the ire of the unipolar military imperialists who control the leadership of the Democrats and the Republicans.

Militarist imperialism has offered a few tactical concessions to Russia’s allies – the unstable agreements with Iran and Lebanon and the flimsy peace accords in Ukraine. At the same time Washington is expanding its military bases from the Nordic-Baltic regions to Asia. It threatens support for military coups in Brazil, Venezuela and Ukraine.

The strategic purpose of these bellicose moves is to encircle and destroy Russia as a potential independent counter-weight to US global dominance.

President Trump’s initial policy has been to build ‘fortress America’: Increasing the military budget, building up police and military power along the Mexican border and within the oil rich Gulf States. Trump’s agenda would strengthen the military in Asia and elsewhere in order to enhance the US’ economic bargaining position in bilateral negotiations with the aim of enlarging its export markets.

The United States is witnessing a deadly confrontation between two sharply polarized imperialisms.

Militarism, the established form of US imperialism is deeply entrenched within the permanent state apparatus. This includes the 17 intelligence agencies, the propaganda departments, the Air Force and Navy, as well as the high tech sector and the commercial capitalist elites who have benefited from foreign imports and foreign low cost skilled labor at the expense of US workers. Their record is one of disastrous wars, lost markets, declining wages, deteriorating living standards and the relocation of well-paid jobs abroad. At best, they have secured a few, weak vassal regimes at an enormous cost.

The Trump regime’s attempt to fashion a strategic imperialist alternative revolves around a more nuanced approach: He seeks to use military power to enhance the domestic labor market and secure mass support for overseas economic intervention.

First and foremost, Trump realizes that Russia cannot be isolated from its markets in Europe and defeated by sanctions. This led him to propose negotiating a global agreement for large-scale trade deals, which would favor US banks, oil, agriculture and upscale industries. Secondly, Trump supports ’social imperialism’, whereby US exports markets, based on local US industries, labor and banks, would lead to higher wages and profits for American businesses and workers. US imperialism would not depend on costly and failed military invasions, but on overseas ‘invasions’ by US industries and banks who would then return their profits to the US for investment and further boost the stock market already stimulated by his stated plans for deregulation and tax cuts.

President Trump’s transition to this new imperial paradigm faces a formidable adversary which has so far succeeded in blocking his agenda and threatens to overthrow his regime.

From the beginning, Trump’s failed to consolidate state power, an error which undermined his administration. While his election victory gave him the Office of the Presidency, his regime is only one aspect of state power, which is vulnerable to immediate erosion and ouster by the independent coercive and legislative branches, intent on his political demise. The other government branches are filled with holdovers from the Obama and previous regimes – and are deeply committed to militarism.

Secondly, Trump failed to mobilize his elite supporters and mass base around an alternative media. His ‘early morning Tweets’ are a flimsy counter-weight to the concentrated mass media attack on his governance.

Thirdly, while Trump moved successfully to secure international support with Japan and England, he backed off from dealing with Russia– which will be central to undermining his imperial adversaries.

Fourthly, Trump has failed to connect his immigration policies with an effective new program of domestic employment and he failed to expose and capitalize on the draconian anti-immigrant policies waged under the Obama administration, during which millions were imprisoned and expelled.

Fifthly, Trump failed to clarify the link between his pro-market economic policies and military spending and how they are linked to a totally different paradigm.

As a consequence, the success of the liberal-neo-conservative militarist assault on the new president has put his central strategy in retreat. Trump is under siege and on the defensive. Even if he survives this concentrated onslaught, his original conception of ‘re-making’ American imperial and domestic policy is in tatters and the pieces will blend the worst of both worlds: Without expanding overseas markets for American products and a successful domestic jobs program, the prospects are for President Donald Trump to revert to overseas wars and usher in a market collapse.