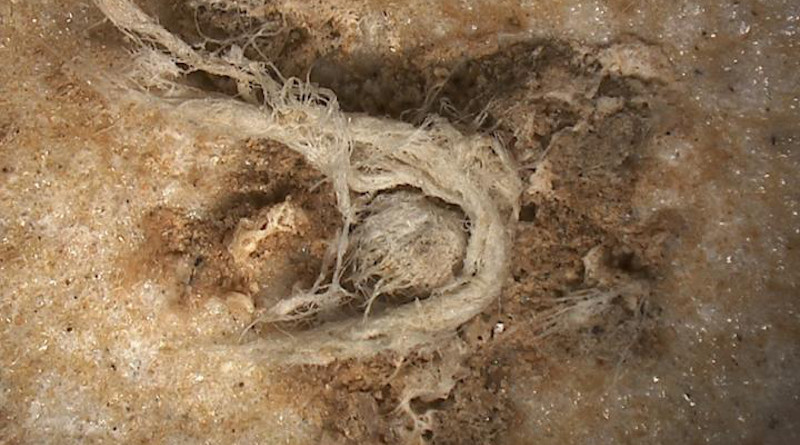 Photograph of the cord fragment taken by digital microscopy (the fragment is approximately 6.2 mm long and 0.5 mm wide). CREDIT: © C2RMF

Contrary to popular belief, Neanderthals were no less technologically advanced than Homo sapiens. An international team, including researchers from the CNRS, have discovered the first evidence of cord making, dating back more than 40,000 years (1), on a flint fragment from the prehistoric site of Abri du Maras in the south of France (2).

Microscopic analysis showed that these remains had been intertwined, proof of their modification by humans. Photographs revealed three bundles of twisted fibres, plied together to create one cord.

In addition, spectroscopic analysis revealed that these strands were made of cellulose, probably from coniferous trees. This discovery highlights unexpected cognitive abilities on the part of Neanderthals, who not only had a good understanding of the mathematics involved in winding the fibres, but also a thorough knowledge of tree growth.

These results, published in Scientific Reports, represent the oldest known proof of textile and cord technology to date.

The excavations at the Abri du Maras have in particular benefited from funding from the French Ministry of Culture and the Auvergne-Rhône-Alpes Regional Archaeology Service.

Notes:
(1) Neanderthals lived between 350,000 and 28,000 years BC.
(2) Archaeological site in southeastern France (Ardèche). The team led by Marie-Hélène Moncel has previously shown that Neanderthals occupied this shelter.