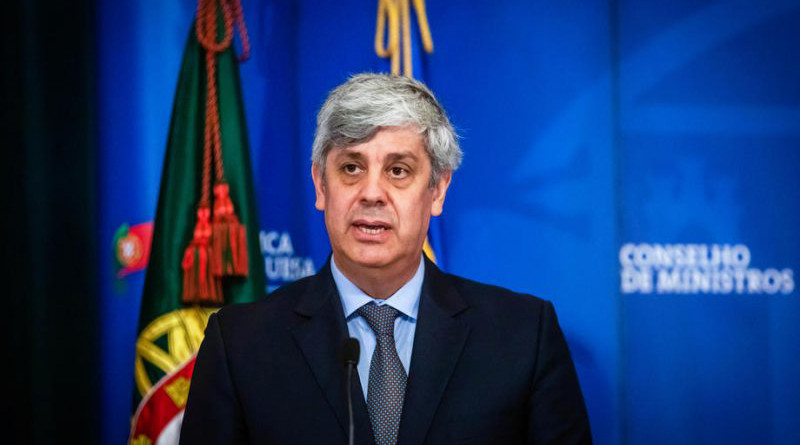 Resigning Portuguese minister of state and finance Mario Centeno speaks during a press conference at the end of the Council of Ministers meeting at the Palacio da Ajuda in Lisbon, Portugal, 09 June 2020. [EPA-EFE/JOSE SENA GOULAO / POOL]

(EurActiv) — In his last interview as Portugal’s finance minister, Mário Centeno, who is also the outgoing president of the Eurogroup, talked to the Portuguese broadcast RTP about his mandates, the relation with Prime Minister (PM) António Costa and the possibility of becoming the new governor of the Bank of Portugal.

As of next Monday (15 June), Centeno will no longer be the minister of finance. His resignation was announced on 9 June and its timing has been questioned by several political analysts.

The current term in office of the central bank Governor Carlos Costa ends in July and Centeno should be the first choice for this position. Also, his mandate at the Eurogroup will come to an end next month, with some candidates to chair the Eurogroup already coming forward.

Centeno said the decision to leave was made over time in consultation with the prime minister, stressing that this is the end of a cycle now that the Eurogroup’s mandate has also come to an end, “a very important factor for the country” that he wanted to conclude.

During the last few months, there has been some speculation regarding Centeno’s relationship with António Costa, with the last conflict in May over the Novo Banco bringing to light a possible discontent between the two.

“All the readings that have been made of my relationship with the prime minister have been decontextualized. There has been no deterioration, nor could there be,” Centeno said, adding that the relation between the finance minister and the head of government should always be “healthily tense”.

The “Ronaldo of finances”

Centeno spent a total of four and a half years in at the Portuguese government, or, as he pointed during his resignation speech “1,664 days as the finance minister and 912 as the president of Eurogroup”.

After a period of austerity by the coalition government under Passos Coelho (2011-2015), Centeno managed to change the political system by bringing Portugal’s public debt down by 14 percentage points to 117.7% in four years.  Also, in the last quarter of 2019, Centeno led the country to a budget surplus (0,2%) for the first time since 1973.

“Today we have credibility in our economic and budgetary policy that unfortunately we did not have four and a half years ago,” Centeno pointed out and stressed that Portugal has managed to make its financial system credible to all international institutions.

He recalled the budgetary arm wrestling with Brussels in 2016 and discussed his arrival at the presidency of the Eurogroup in 2018, something that, in his opinion, may not be valued in Portugal.

“Perhaps we still do not know how to appreciate the fact that Portugal’s Minister of Finance is the president of the Eurogroup,” Centeno said.

Where is Centeno headed next?

Since 2000, Centeno has been an employee of the Bank of Portugal. The big question is whether he will rise to the position of governor as early as July this year.

On this subject, Centeno said only that there is a vacancy that is going to open. “This is a very important position for the country, one that will not lose importance in the coming years and one that any economist can fill,” he said.

Centeno’s desire to reach the top office may suffer a setback after the Portuguese parliament last week sent into the procedure a proposal by the Party for Animals and Nature preventing anyone who has held the position of prime minister or finance minister in the last five years from becoming the central bank governor.

This amendment still has to be discussed in the parliamentary committee on economy, before a full vote in parliament, and Centeno may now be running out of time.