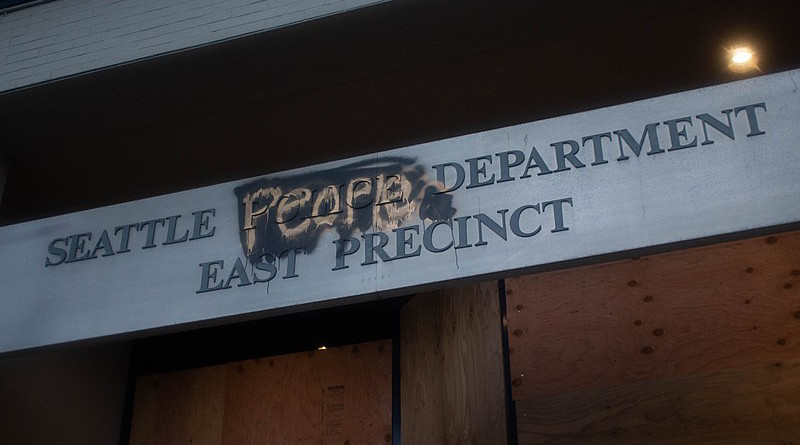 The entrance sign Seattle East Precinct in the Capitol Hill Autonomous Zone in Seattle, WA on June 9, 2020. The word "police" is covered up with "People's". Photo Credit: Swoggle, Wikipedia Commons

President Donald Trump has blasted Seattle’s mayor for describing the city’s ‘autonomous zone’, a few blocks taken over by protesters who chased police out, as a place that could have a “summer of love.”

“Seattle Mayor says, about the anarchists takeover of her city, ‘it is a Summer of Love,’” tweeted the president on Friday.

“These Liberal Dems don’t have a clue. The terrorists burn and pillage our cities, and they think it is just wonderful, even the death. Must end this Seattle takeover now!”

Trump’s words came in response to Seattle Mayor Jenny Durkan giving a Thursday night interview to CNN in which she played down the threat posed by the police-less area in her city.

“How long do you think Seattle in those few blocks looks like this?” CNN’s Chris Cuomo asked.

“I don’t know. We could have the summer of love,” the mayor replied.

Video out of the ‘autonomous zone’, popularly referred to as CHAZ, has shown a place patrolled by citizens with rifles, with tensions running high between those occupying it and police officers who attempt to come inside.

Tensions are high in the CHAZ after some officers came in to enter the East Precinct. Some in the crowd wanted to make sure nothing happened to the officers. Others wanted to prevent the officers from entering the zone. Arguments are breaking out amongst the crowd.

The occupiers in the “Capitol Hill Autonomous Zone” have torn away some of the barricades police left in place at the East Precinct.

Trump and the city’s mayor have been clashing over the area, with the president previously vowing to step in and take over the situation if Durkan did not claim back the set of blocks.

“Take back your city NOW. If you don’t do it, I will. This is not a game,” Trump warned Durkan and Washington Governor Jay Inslee through Twitter.

Durkan said Trump’s threat was “unconstitutional” and described the act of the ‘autonomous zone’ as “not terrorism,” but “patriotism.

Seattle’s police chief, Carmen Best, appears to be more in line with the president, saying in a video address on Thursday that abandoning the police department within the ‘autonomous zone’ was “not my decision.” She also blasted city officials for giving into the demonstrators, calling the abandonment of CHAZ an “insult” to police and the “community.”

“Our calls for service have more than tripled,” she told reporters about the area, “These are responses to emergency calls – rapes, robberies, and all sorts of violent acts that have been occurring in the area that we’re not able to get to.”