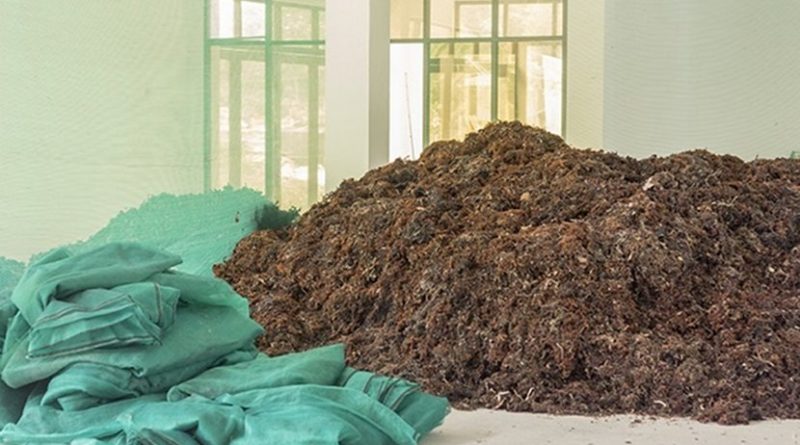 The seaweed is collected by hand, washed and dried in the sun before being cooked. (Salifa Karapetyan, SNA)

A father and son team — Bernard and Benjamin Port Louis — have started to transform seaweed into liquid fertiliser.

“We have started production just in time as the country enters the South East monsoon season when the most seaweed is deposited on our beaches,” said Bernard, the father.

According to Bernard, the liquid fertiliser is used for foliage. Nothing is wasted in the process as Bernard explains: “After the extraction of the liquid is completed the seaweed is sundried again before being pulverised and turned into fertiliser to be used for soil conditioning.”

The factory, which is the brainchild of the son, Benjamin, was completed last year. Benjamin Port Louis recently graduated from James Cook University in Townsville, Australia.

During the South East monsoon from May to October, it is estimated that around 100,000 tonnes of seaweed accumulate on the beaches of Praslin. For many years the accumulation of seaweed, which is smelly and attracts flies, posed as a nuisance for people, especially beach visitors. The most common type found on the Seychelles’ beaches is the ocean algae “sargassum” along with the seagrass.

Benjamin is appealing to the government to support this innovation as the factory is the first in the island nation. Seaweed Seychelles is located on the manmade island of Eve, just off Praslin island. “While operation in the factory is going well, we still need additional land for drying the tonnes of seaweed collected,” said Benjamin.

“Seaweed Seychelles is providing much-needed fertiliser for Seychelles, but we will also be looking at opportunities for exportation as well,” said Bernard, adding that Reunion, a French department in the Indian Ocean, may be an option.

Locally the end products are being distributed to farmers on Praslin, the second most populated island of Seychelles, an archipelago in the western Indian Ocean.

Brian Taylor, from Wise Oceans, told SNA on Tuesday that this move is a good one and could be a great opportunity for the islands but only if it is done in a sustainable manner.

“These kinds of opportunities are exactly what Seychelles should be looking at. It sits well with the concept of the blue economy, which Seychelles is pushing, and it gives way to new technologies,” said Taylor, who is the education and outreach manager for WiseOceans, a marine conservation and education company that works globally to strive towards a future with healthier oceans.

The ministry for environment, energy and climate change told SNA that strict guidelines have been given to the factory with regards to the harvesting of the seaweed.

“One thing that we insisted on is that the collection of the seaweed is done manually. This is because seaweed, when deposited on the beach, accumulates sand. We wanted to avoid the use of machinery in the process of collecting the seaweed as this would also collect sand. When done by hands, seaweed can be shaken and sand falls back on the beach,” explained Annie Simeon, who is the coastal coordinator for coastal at the ministry.

Simeon said that this is “crucial as seaweed plays a key role in preventing beach erosion.”

The factory is using green energy for all its operations. With the installation of a solar hot water system used to cook the seaweed, the factory can produce 4,000 litres of hot water a day. In addition to that, there is a 12-kilowatt photovoltaic solar system to produce electricity for the daily running operation.