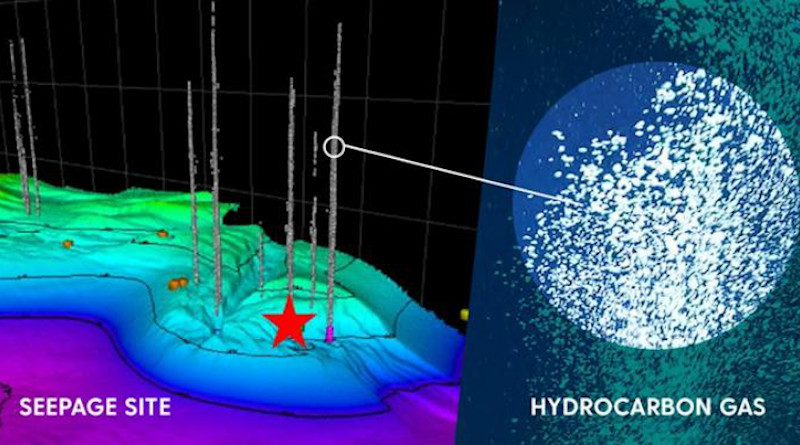 Microbes found deeper in the ocean are believed to have slow population turnover rates and low amounts of available energy. However, microbial communities found deeper in seafloor sediments in and around hydrocarbon seepage sites have more energy available and higher population turnover rates than previously thought. CREDIT: Graphic by Jeffrey C. Chase

Microbial cells are found in abundance in marine sediments beneath the ocean and make up a significant amount of the total microbial biomass on the planet. Microbes found deeper in the ocean, such as in hydrocarbon seeps, are usually believed to have slow population turnover rates and low amounts of available energy, where the further down a microbe is found, the less energy it has available.

A new study published out of a collaboration with the University of Delaware and ExxonMobil Research and Engineering shows that perhaps the microbial communities found deeper in the seafloor sediments in and around hydrocarbon seepage sites have more energy available and higher population turnover rates than previously thought.

Using sediment samples collected by ExxonMobil researchers, UD professor Jennifer Biddle and her lab group — including Rui Zhao, a postdoctoral researcher who is the first author on the paper; Kristin Yoshimura, who received her doctorate from UD; and Glenn Christman, a bioinformatician — worked on a study in collaboration with Zara Summers, an ExxonMobil microbiologist. The study, recently published in Scientific Reports, looks at how microbial dynamics are influenced by hydrocarbon seepage sites in the Gulf of Mexico.

Biddle and her lab members received the frozen sediments, collected during a research cruise, from ExxonMobil and then extracted the DNA and sequenced it at the Delaware Biotechnology Institute (DBI).

The samples Biddle’s lab group studied were ones collected from deeper in hydrocarbon seeps that usually get ignored.

“Most people only look at the top couple of centimeters of sediment at a seep, but this was actually looking 10-15 centimeters down,” said Biddle associate professor in the School of Marine Science and Policy in UD’s College of Earth, Ocean and Environment. “We then compared seepage areas to non-seepage areas, and the environment looked really different.”

While the microbes found inside the seep seem to be racing to make more nitrogen to keep up and grow with their fellow microbes, outside of the seep, the researchers found a balance of carbon and nitrogen, with nitrogen actually being used by the microbes as an energy source.

“Usually, we don’t think of nitrogen as being used for energy. It’s used to make molecules, but something that was striking for me was thinking about nitrogen as a significant energy source,” said Biddle.

This difference between the microbes found inside the seeps and those found outside the seeps could potentially mirror how microbes behave higher in the water column.

Previous research of water column microbes shows that there are different types of microbes: those that are less efficient and lead a more competition-based lifestyle where they don’t use every single molecule as well as they could and those that are really streamlined, don’t waste anything and are super-efficient.

“It makes me wonder if the microbes that are living at these seeps are potentially wasteful and they’re fast growing but they’re less efficient and the organisms outside of the seeps are a very different organism where they’re way more efficient and way more streamlined,” said Biddle, whose team has put in a proposal to go back out to sea to investigate further. “We want to look at these dynamics to determine if it still holds true that there is fast, less efficient life inside the seep and then slower, way more efficient life outside of the seep.”

In addition, Biddle said this research showed that the deeper sediments in the seepages are most likely heavily impacted by the material coming up from the bottom, which means that the seep could be supporting a larger amount of biomass than previously thought.

“We often think about a seep supporting life like tube worms and the things that are at the expression of the sediment, but the fact that this could go for meters below them really changes the total biomass that the seep is supporting,” said Biddle. “One of the big implications for the seepage sites with regards to the influence of these fluids coming up is that we don’t know how deep it goes in terms of how much it changes the impact of subsurface life.”

Summers added that these are interesting insights “when considering oil reservoir connectivity to, and influence on, hydrocarbon seeps.”