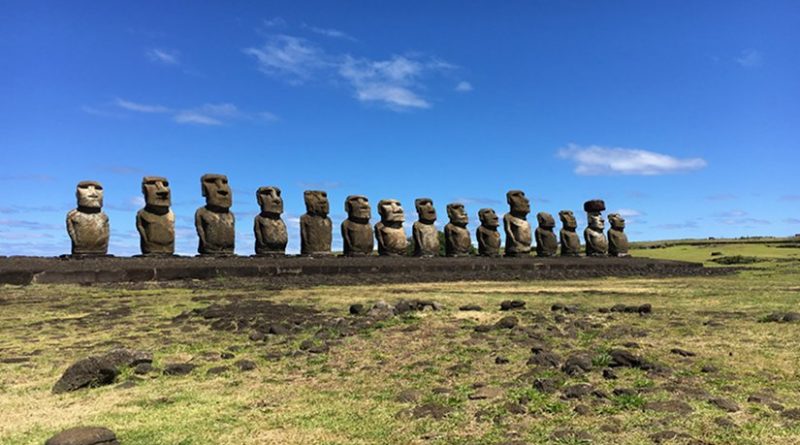 Rapa Nui (Easter Island, Chile) has long been a source of intrigue and mystery. How did such a small community of people build so many impressively large statues? And what happened to cause that community to collapse? Researchers have also been curious about what kind of contact Rapa Nui’s inhabitants, known as Rapanui, might have had with South Americans prior to the arrival of Europeans. Earlier evidence seemed to support early contact between the Rapanui and Native Americans .

But a new study of ancient DNA evidence collected from archaeological samples and reported in Current Biology on October 12th calls those findings back into question. The new study finds no genetic evidence that ancient inhabitants of Rapa Nui intermixed with South Americans. While the findings can’t exclude the possibility that cultural contact took place between the two populations, if long-distance treks across the ocean did occur, “they did not leave genetic traces among the individual samples,” said Lars Fehren-Schmitz of the University of California, Santa Cruz. “We were surprised that we didn’t find any Native American admixture in our ancient Rapanui specimens.”

The idea that there had been early Pacific contact with South America, or even that a Southern Pacific migration route contributed to the peopling of the Americas, has been a long-standing debate in the field. In their new study, Fehren-Schmitz and colleagues wanted to find out what DNA from ancient Rapanui samples had to say on the matter.

The researchers sequenced DNA from five individual samples representing Rapanui both before and after European contact. They report that the DNA, including both complete mitochondrial genomes and low-coverage autosomal genomes, indicates that the DNA of the sampled individuals falls within the genetic diversity of present-day and ancient Polynesians.

The new study highlights the value of ancient DNA for testing hypotheses about the past. It’s clear from earlier evidence that living Rapanui do have a small proportion of Native American ancestry. But, the researchers in the new study say, “it is especially difficult to disentangle movements of people in the prehistoric period from more recent times.” The question remains: How and when did this population exchange happen?

The researchers say they’d now like to generate genome-wide data from additional ancient Oceania and western South American populations. The goal is to develop a more detailed picture of the populations that lived within each of these regions and potential interactions among them.