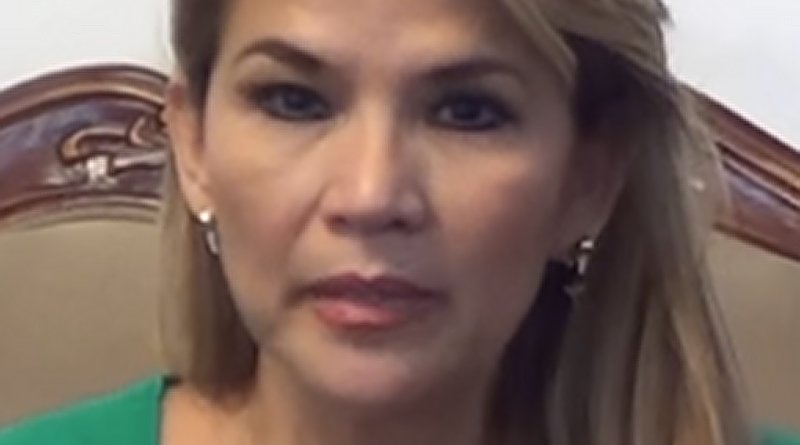 Opposition politician Jeanine Añez has declared herself “interim president” of Bolivia without a vote, but the party of ousted President Evo Morales said that the Senate had no quorum and the legislature’s session was not legal.

Añez’s actions echo those of Juan Guaido in Venezuela, who declared himself “interim president” in January with the backing of Washington and the Organization of American States (OAS). While Guaido has repeatedly failed to oust President Nicolas Maduro, however, the opposition in Bolivia – also backed by the US and OAS – has been able to force the resignation of Morales after the military defected to their side.

While opposition activists claimed that Añez’s declaration was in line with the Bolivian constitution, lawmakers from the ousted president’s Movement for Socialism called the assembly session illegal. They have refused to attend the proceedings, saying that armed groups loyal to the opposition controlled the roads and could not guarantee their safety.

Morales’s party has had the majority in both the Senate and the Chamber of Deputies, and its boycott leaves both bodies without a quorum. Vice-President Alvaro Garcia Linera also “resigned” along with Morales on November 10, leaving the country in legal limbo. Their supporters have called the forced resignations a “coup” and vowed to resist by force if necessary.

Washington hastened to hail Morales’s ouster as a “significant moment for democracy in the Western Hemisphere” and accused the socialist president of seeking to subvert the will of the people by running for a fourth term, even though the Bolivian courts had allowed it.

Morales was one of the few Latin American leaders bucking the US line on Venezuela and supporting Maduro. Landing in Mexico, where he was granted asylum, on Tuesday he vowed to continue to fight “as long as I live.”