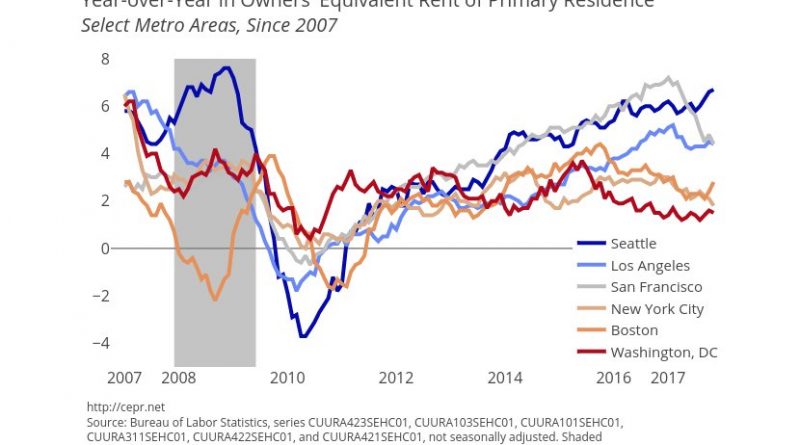 The year-over-year rate of inflation in the northeast has been just 1.6 percent.

A 3.9 percent jump in energy prices led to a 0.4 percent increase in the CPI in November. This brings the year-over-year increase to 2.2 percent. However, outside of energy, inflation remains well contained, as the core index increased by just 0.1 percent in November. It is up 1.7 percent over the last year.

There may be some modest evidence of acceleration in the core. The annualized rate of inflation comparing the last three months (September, October, and November) with the prior three months (June, July, August) is 2.1 percent. But this is far from conclusive.

The difference between the two indices is explained primarily by the fact that the rent proper index includes some utilities that are covered by the rent of a unit. With energy prices increasing considerably faster than the overall CPI, this is likely to mean that the utilities included in rent payments will push up the measured rate of inflation in this index.

A core index that excludes rent was flat last month. This index has increased by just 0.6 percent over the last year.

Not surprisingly, there are sharp differences in the rate of increase in rents across the country. While rents have generally been reasonably constrained in most cities in the South and Midwest, they had been rising rapidly on both coasts. However, this pattern seems to be changing in the last couple of years. The rate of increase in rent has slowed sharply in East coast cities like Boston, New York, and Washington. In Washington, the owners’ equivalent rent index has risen by just 1.5 percent over the last year.

By contrast, West coast cities like Seattle, San Francisco, and Los Angeles continue to see rapidly rising rents. In Seattle, the owners’ equivalent rent index increased by 6.7 percent over the last year. If rents continue to outpace inflation substantially, it looks like the trend will be driven by an increasingly narrow number of metropolitan areas. This is seen clearly in the regional indexes which show a 3.1 percent year-over-year increase for western cities, compared to just 1.6 percent for the northeast.

Outside of energy and rent, there were not many areas of excessive inflation. New vehicle prices rose 0.3 percent, while used car prices jumped 1.0 percent. Both are likely anomalies connected to replacing cars destroyed by the hurricanes. Over the year, new and used vehicle prices are down by 1.1 percent and 2.1 percent, respectively.

Auto insurance continues to be a problem area, with the index rising 0.8 percent in November, bringing its year-over-year increase to 8.0 percent. The weight of auto insurance in the CPI is almost 50 percent higher than the weight of college tuition.

The overall picture in the November price reports is little changed from past reports. Core inflation remains well-contained at less than 2.0 percent, with little evidence of acceleration, in spite of unusually low unemployment. Even this modest inflation is driven disproportionately by rapidly rising rents. In the absence of rent, the core inflation rate would be less than 1.0 percent. The traditional problem areas of health care and education no longer seem to be problem areas as the rate of inflation has been modest in both sectors.