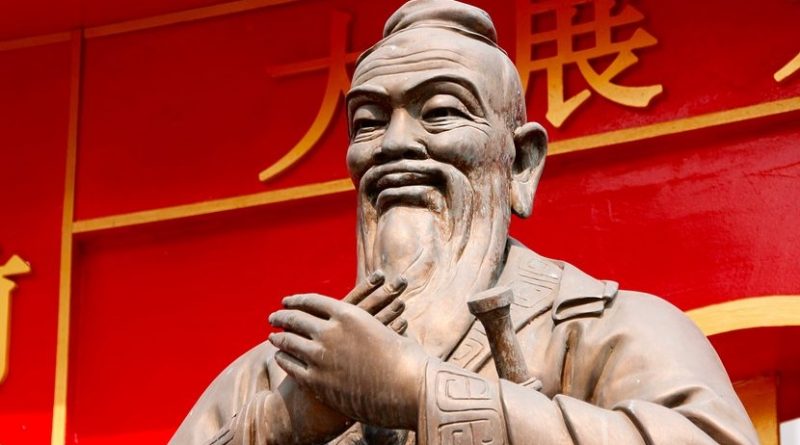 Statue of Confucius in China.

Why The Sage’s Ideals Matter To Xi Jinping.

Asia seems to be on a journey of discovering its traditions. India is connecting with its culture. In 2015, United Nations General Assembly declared 21 June as ‘International Yoga Day’, giving a major boost to the ancient Indian practice. In a span of nearly two years, yoga seemed to be a rage across the world with thousands descending on Times Square in 2017 to mark the day. A small company, which was founded by a monk who had no experience in the FMCG sector, gave well-established MNCs a run for their money. Its USP was ayurved, a 5,000-year-old natural healing solution.

In Asia, where memorials and statues decide the stature of a person long after he/she has left this world, the world’s largest Confucius statue was inaugurated in his hometown Qufu, Shandong province, two months ago. The thoughts of the Chinese sage had a huge impact on the administration through the ages. His teachings have resonated during various phases in China’s history in the curriculum of its imperial service examinations, which allowed for advancement in governance hierarchy for the nation’s youth. The scholar believed that acting ethically in situations relating both to the family and state would create social harmony, and that it was the job of rulers to emulate and spread ethical behaviour, just as it was children’s duty to venerate their parents and continue their traditions, codifying the filial piety that continues to define familial relations across Asia. His teachings are preserved in Analects, a book that takes the form of structured conversations between Confucius and his followers.

However, Confucian thought went out of favour with the fall of the Imperial Court in early 19th century. The May Fourth Movement, an anti-imperialist and cultural agitation of students in 1919 that laid the seeds of the Communist Party of China’s (CPC) birth, aimed at eradicating the ills of traditional Chinese society. The agitators slammed Confucian thought, calling for an end to patriarchy.

The modern nation’s founder, Mao Zedong, denounced Confucius for “subjugation of women”. He accused the sage of propagating an orthodox ideology that curbed women from receiving an education and encouraging the brutal practice of foot binding, in which a girl’s feet are wrapped to stunt her growth.

In the 60s, at the height of the Cultural Revolution, Mao’s Red Guards waged a battle against the Old Customs, Old Culture, Old Habits, and Old Ideas (known as the ‘Four Olds’). The Cemetery of Confucius in Shandong was attacked and vandalised by a team of Red Guards from Beijing in November 1966.

In 2004, Confucius Institute, an outreach project of the Chinese government to promote its language and culture, was born.

Experts say, the project is the “biggest soft power and public diplomacy programme” in the world and over the years there are more than 1,000 Confucius institutes across the globe.

A year later, Xi visited the Research Institute of Confucianism in the city of Qufu, the hometown of Confucius, and Kong Family Mansion, the historical residence of the direct descendants of Confucius. He called for new and positive roles for Confucianism.

The Economist reported that in February 2014 he convened a “collective study” session of the party’s elite and emphasised Confucian values. Months later, Xi became the first party chief to attend a birthday party for Confucius. Incidentally, since becoming China’s leader, Xi has not paid respects at the birthplace of Mao Zedong at Shaoshan in Hunan province.

His ‘Xi Jinping Thought’ refers to the preaching of stalwarts like Mao and Marx, but draws on ancient Confucianism. Xi underscores the wisdom of Confucius with emphasis on submission and stability. The idea is perhaps to promote to the nation that he is the protector of a 5,000-year-old civilization.

To some extent Xi’s anti-graft campaign is spurred by Confucian principle of probity in public office. The Communist Party of China perhaps believes that the sage’s thoughts have the advantage of being home-grown and are keen on cashing in on its appeals to a yearning for ancient values among those thrown off-balance by the nation’s rapid speed of change.

Over the last few years, several private educational institutes dedicated to Confucian teachings have opened across the country in response to a desire by parents to school their wards in traditional education. The schools, backed by the central government, instil ideas on filial piety and integrity. At a tender age, kids start memorising Confucian classics, at six (when state schooling commences) they begin reciting the Great Master’s wisdom. The demand for such ‘prep’ schools is growing with upper middle-class parents yearning for inculcating a Confucian bent of mind.

China’s pragmatic ruler is merely following in the footsteps of East Asia’s mini-dragons. In 18th century Japan, the elite was eager to modernise and catch up with the West. Confucian ideals were determinedly used in the curriculum, which were developed to serve the government’s desire to link industrialisation with the preservation of traditional Japanese respect for family and state. The Ministry of Education issued ethics textbooks in Japanese schools between 1904 and 1945, introducing students to topics like learning, loyalty, courage and kinship. The implicit aim was to introduce a sense of self-cultivation, a sense of a nation and civic ethos. It specially emphasised on the need for each citizen to be a good person and learn and constantly upgrade his/her knowledge.

Singapore, a British colony that become an independent state by 1965, transformed from a no-hope to a nation with the second highest per capita income. Due to an ambitious industrialisation programme in the 1970s, the standard of living of Singaporeans grew, so did crime, drug abuse, delinquency. The state later introduced Confucian ethics as a component of moral education as a “counterweight to creeping Western culture”. Singapore’s Lee Kuan Yew used Confucian ideals as a means of ensuring modernisation and political stability.

While the enormous statue watches over China, Confucius’ hometown of Qufu is scheduled to host China’s first teachers’ museum. The message from Beijing is clear. Mao’s visage is ubiquitous across China, but Confucius is its new star.

*Kalpit Mankikar was a news editor at a leading Indian broadsheet, and is currently pursuing his China studies at the London School of Economics.

Home » The Rebirth Of Confucius In His Homeland – Analysis