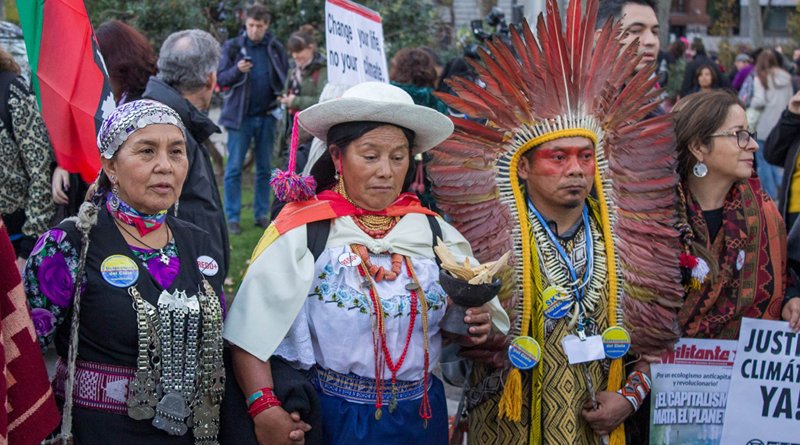 Indigenous communities of the Amazon say they are being excluded from decision-making as COP25 climate talks hone in on carbon markets.

Establishing an effective and fair global carbon market is one of the key aims of the UN climate summit taking place in Madrid (2–13 December 2019). But spokespeople for indigenous groups of the Amazon say that placing such emphasis on carbon markets treats forests as commodities rather than areas of unique biodiversity and cultural heritage.

Many representatives of these communities feel that despite the rhetoric of a “just transition” to low-carbon economies, the prevailing approach still protects business interests over native communities.

The 25th summit of the UN’s conference of the parties (COP 25) is the final one ahead of crucial 2020 deadlines set by the 2015 Paris agreement – when many nations must submit new climate action plans.

The Paris accord set the global goals of achieving net-zero carbon emissions by 2050 and to limit global temperature rise to 1.5 °C above pre-industrial levels by the end of the century.

With the COP 25 conference in its final days, negotiations are focused on breaking the deadlock around rules for carbon markets under article 6 of the Paris agreement.

Carbon markets allow high carbon-emitting countries to buy carbon credits from countries that haven’t exceeded their emissions targets. The aim is to reduce the overall cost of meeting the targets, but critics say it allows richer countries to dodge responsibility for cutting their own emissions.

COP 25 is taking place under the presidency of Chile, even though the location was switched to the Spanish capital due to civil unrest in Santiago. As such, Latin American issues have featured strongly in the programme and spokespeople for indigenous groups of the Amazon have voiced their concerns about the UN climate negotiation process.

Many groups feel that despite the rhetoric, indigenous communities are still not being directly included in decisions that ultimately affect their territories.

Fermín Chimatani, president of Anecap Perú, an indigenous association representing the 10 communal reserves of Peru, said: “It’s important to recognise the contribution that we make together, all the indigenous communities of the Amazon basin. It’s important to see us as keys to the government discussions about climate change.”

Deforestation and forest degradation through fires are the biggest imminent threats to Amazonian communities. According to the World Wildlife Fund, around 17 per cent of the Amazon rainforest has been lost in the past 50 years, mainly due to clearance for cattle ranching but also because of mining and hydroelectric projects.

To encourage the preservation of forests worldwide, the parties of the United Nations Framework Convention on Climate Change (UNFCCC) established the REDD+ programme in 2005. Rather than legally binding rules, REDD+ is a set of guidelines to protect these vital carbon sinks through a variety of forest management options.

Critics, however, have pointed out shortcomings of REDD+ in its application. Indeed, the UN itself acknowledged some of the issues via the Intergovernmental Panel on Climate Change Special Report on Climate Change and Land, published in August 2019. Studies highlighted in that report conclude that at a local level, indigenous people have not been sufficiently involved in the planning and distribution of benefits of REDD+ projects.

That is also the conclusion of Robinson Lopéz, the coordinator for climate change and biodiversity of COICA, an organisation that represents indigenous groups from nine countries in the Amazon basin. “The governments have to recognise the historical work of our communities in conserving our territories. People that cooperate with us should guarantee that we receive resources directly to strengthen the livelihoods of people in these communities.”

COICA has developed a proposalfor a regional consultationprotocol for indigenous voices to be included in climate plans. It has also declared a climate emergency in the nine nations represented by the organisation.

Loud calls to protect indigenous rights have resonated throughout COP 25. Former US vice-president and Nobel Peace Prize winner Al Gore spoke on Tuesday (10 December) about forest degradation due to intentional fires in the Amazon.

In a packed media briefing on Monday (9 December), climate activist Greta Thunberg appeared alongside members of native communities from South America, North America and Africa. “It is so important that we listen to indigenous people because they are suffering and their rights have been violated across the world and they are also among those who will be hit the most,” she said.

Away from the conference itself, Thunberg and the indigenous Brazilian activist Sônia Guajajara were among the speakers at a climate demonstration in central Madrid on Friday (6 December) which organisers say attracted around 500 000 people.