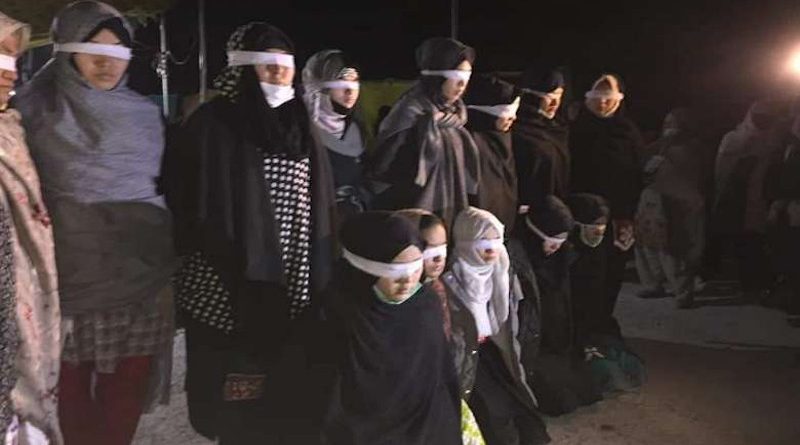 Blindfolded female protesters at the sit-in by the Hazara community in Quetta, Pakistan. (Photo supplied)

When Tahir Khan visited a Quetta highway blocked with the bodies of 11 slain coal miners, he was greeted by women wearing white blindfolds.

“All of them were family members of the victims enduring a freezing temperature of minus nine. They denied being blackmailers and even tied their hands to prove they are harmless. They only appealed for a visit by Prime Minister Imran Khan to share their pain and ensure the future safety of our community,” the leader of Hazara political workers told UCA News.

“Many still carry the Quran on their heads cursing the killers and planners of the tragedy. Our graveyards are full. The visit of the premier is of no significance. We have met many ministers in the past.”

He referred to a Jan. 8 statement by the prime minister, who accused Shia Hazara protesters of blackmailing him as they refused for a sixth day to bury the bodies of miners killed in a brutal attack claimed by the Islamic State. The killings in Balochistan province on Jan. 3 were filmed and later posted online.

“No prime minister should be blackmailed like this, otherwise everyone will start blackmailing the prime minister,” said Imran Khan, adding that he would only visit Quetta once the funerals had taken place.

The 11 miners from the minority community were kidnapped near a coal mine in Mach close to Pakistan’s border with Afghanistan.

More than 3,000 protesters ended their protest at the weekend and buried the bodies after the PM assured them of his visit. But his remarks caused an immediate stir on social media. The hashtag #PMshouldapologize became a top trend.

“HRCP is appalled at PM Imran Khan’s statement on being ‘blackmailed’ by the Hazara mourners. The Hazara have long been relegated to the margins and persecuted to the point of genocide; to dismiss them as ‘blackmailers’ is disgraceful,” stated the Human Rights Commission of Pakistan in a Jan. 8 tweet.

“The PM has a duty of care to the community and must respect them. The state should take immediate steps to secure their lives and liberty.”

More than 50 activists, including children, gathered on Jan. 8 at Lahore Press Club to protest against the massacre. They held placards demanding rights and security for the Hazara community. One placard read: “We stand with Balochistan.”

Some moved the crowd of protesters with their heartfelt poems. These included Muzammil Khan, whose relative, a Hazara revenue officer in Balochistan, disappeared in 2018.

“Our province is destroyed. There is no education, business or peace. We have become psychotic. The education budget is being spent to pay the salaries of paramilitary Frontier Corps,” he said.

“I condemn the tyranny against the Hazara community. We share your grief. I salute the martyrs who were killed for their faith. I demand the government provide justice to the community. Shia Hazara remained peaceful despite the ongoing violence. All local religious minorities are Pakistanis. They should be treated equally,” he said.

The impoverished southern province of Balochistan is Pakistan’s largest and poorest region. It has been wracked by violence perpetuated by Islamist militants and separatists. Attacks have increased on Christians, Shia Hazara and security forces. Many Sunni Muslims regard the Hazara as infidels.

The Hazara in Balochistan find themselves particularly vulnerable to attack because of their distinctive facial features and Shia religious affiliation.

Despite 10 check posts and 19 Frontier Corps platoons in the two main Shia Hazara settlements — Marriabad and Hazara Town — according to the home department, more than 500 Hazara have been killed and 627 injured between 2014 and 2019. According to the Hazara Democratic Party, 75,000 to 100,000 Hazaras have fled violence and left for elsewhere in the country or abroad.

“Security measures for Hazara areas have led to the extreme ghettoization of the community. Community traders that leave their settlements are forced to take Frontier Corps protection with them, and Hazara students have been forced to drop out of university for fear of attacks. This has led to a separation of the community from the rest of the city and the country, and an inability of the community to live a regular and normal life,” stated the latest annual report of HRCP.

In 2018, the minority Muslim group held a four-day hunger strike over targeted killings of eights Hazara after meeting army chief Gen. Qamar Javed Bajwa, who flew to Quetta and met representatives of the Hazara community on May 1.

In 2016, nine worshippers were killed in a suicide bombing at Bethel Memorial Methodist Church in Quetta.