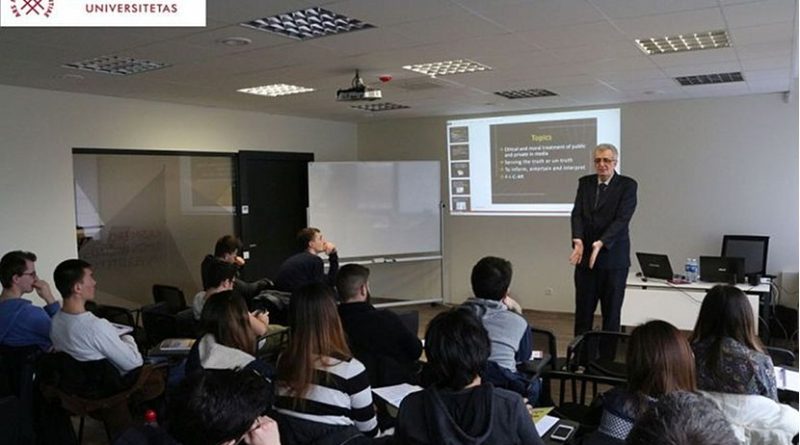 Dr. Sabahudin Hadzialic in a classroom.

The concept of media literacy starts from the media as a positive source of information aimed at the shaping of a positive manipulation, maintenance and development of society for good intentions and interests intertwined with “all for all” goals, and not for negative manipulation of shaping, maintenance and development of the society of aiming orientation towards satisfying the individual and / or a smaller group and/or party intentions and interests “all for one” and / or “one for all”.

For the democratic participation of citizens it is necessary to have critical thinking skills and self-expression with a goal to have the proper appearance within the decision-making process from a micro level and up to macro areas of interest and the participation of the citizens themselves.

Media literacy enables primarily children, future citizens for the political choices, to understand political discourse and participation within it. In this way, as mature, media literate, well-informed citizens they will be able to make their own decisions about the democratic electoral process. However, adolescents, young people and adults, but also the oldest citizens often need to be media literate, especially due to the fact that in the age of new media and new technologies, the knowledge that we possess becomes obsolete very quickly and it is certainly necessary to participate in lifelong learning and within the media literacy of all generations of citizens.

By understanding the impact of media on society, media literacy prevents us in becoming dependent on the media. Or to at least it enables us to control the selection method, the method of reading and making appropriate decisions based on the “reading” of the media that are available to us. The using and abusing of the new media and the availability of different information to everyone at any time and in any way possible within the multimedia availability of new media certainly shows how much more needs to be done on improving the education of all individuals, regardless of their social, racial, ethnic, and / or political status, and above all because society aims towards further development of direct and immediate democratic consciousness.

We will try, in the months to come, to work on the presentation of the cancellation of false impression about the level of media literacy among the people around the world, with the necessity of education on general media literacy, with mandatory education on new media and social networks, which builds a general media literacy of every individual within the society, raises awareness about the immediate power of citizens in a creation of democratic environment, with understanding and avoiding manipulations which are tend to all politicians, regardless of the level of government from which they come.

At the same time, the need for research is a prerequisite for the media also, as someone which does not just transfer the content, but also produces it, from the ethical level should be involved in education on media literacy, while in the same time self-educating and upgrading own education within the specified forms of appearance .

Media literacy in itself carries two meanings: as the term is defined as the ability to access, analyze, evaluate and transmit messages through the media while the essential focus of media literacy is in acquiring complete knowledge of critical and creative skills, knowledge that helps to connect complex ideas, constantly questioning the appearances, trying to identify responses that will satisfy the congenital curiosity of each of us, but it also identifies the individual, and also wider, social misconceptions and delusions.

In the second half of the 20th Century, UNESCO (Media Studies in Education, 1977) has raised the issue of education about the way of reading the media. Basing on the idea of the importance that media has within the lives of individuals, families, and the wider community, UNESCO has called for the meeting of international scientists to explore ways of involving media education in the education systems of all developed but also of the less developed countries. Since the signing of the Declaration on Media Education (1982) to date, the concept of media literacy or media education has changed, but remained based on the basic idea – communication rights that comes out from the basic human rights that are guaranteed through the documents of the international community, and above all by the Universal Declaration on Human Rights (UN, 1948) and by the European Convention for the Protection of Human Rights and Fundamental Freedoms (1950).

The essence and significance of media literacy is, primarily, reflected in the influence of the media on the major democratic processes. In order for the citizens to participate, in a democratic way, in democratic processes that directly affect their life as well as the life of their family and the wider community, media literacy or knowledge within the above mentioned enables a complete population, and especially younger categories of population to future citizens – to make decisions on understanding of the wider social discourse – political choices, as well as direct participation in the stated, for the benefit of society as a whole.

The media today influences the shaping of opinions, beliefs and attitudes. Although there are differences in the level of media influence, all researchers involved in the analysis of the media of the sui generis agree that the media have a tremendous impact on the society as a whole, and thus eo ipso on each individual and persons narrow circle. In the moment when we understand the influence of the media, with the help of media literacy, we are on the right path to prevent dependence on the media – apropos, to use them as a tool for making judgments and attitudes within the creation of a healthy society of direct democratic consciousness and not the main dish of manipulation on the table of bad individual, or narrow group ones, intentions and interests.

At the same time, the immediate link between politics and the media within the possible assumptions of all forms of manipulation through consciousness, understanding and possible conclusions, through the creation of mediocracy (Thomas Meyer, 2002), apropos media democracy where we not know any more, or are unable to know, how much politics leads the media or vice versa – how much media control and directing politics and creating a new reality that often does adjoin with virtual forms of assumptions of possible solutions addressed to negation of democracy, or demokratura as it is (made of two joined words: democracy and dictatorship – in South_Slav language: demokratija + diktatura= demokratura1).

The basic hypothesis in this cycle of the essays is that media literacy is a basic presumption for the establishing a society of developed democratic consciousness. At the same time, the other the hypothesis appeares as a logical sequence and refers to the political manipulation of the subjects of political pluralism precisely on the basis of insufficient media literacy of the very society. The third hypothesis also applies to the professionalism of the intermediaries, journalists, those specific personalities that are between the public and the source of information (however, having in mind new media technologies, the question rather should be: who are the journalists and do they exist anymore?).