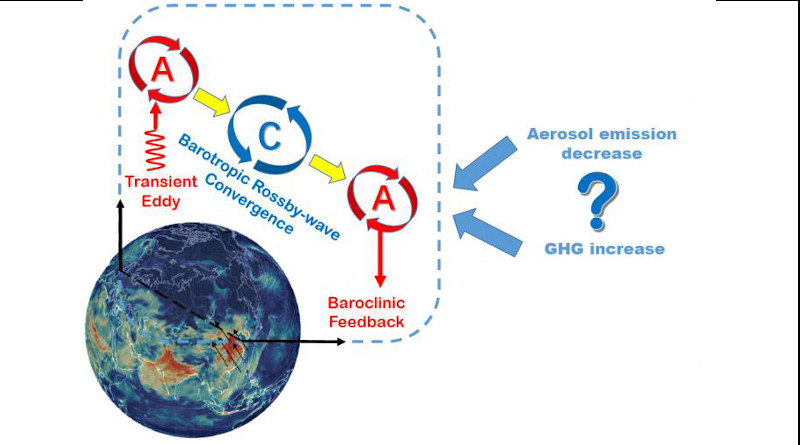 Future aerosol emission reductions will worsen atmospheric diffusion conditions by strengthening the anticyclone in eastern China (Here the picture of the earth is from https://earth.nullschool.net/) CREDIT: Weiyang Feng

As one of the world’s most densely populated regions, eastern China has been plagued by air pollution. The future projection of atmospheric diffusion conditions conducive to extreme haze events over eastern China is therefore of great importance for government emission regulations and public human health.

“Under the RCP8.5 scenario (a high emissions scenario), while the warming caused by the increase of greenhouse gases dominates, the effects induced by aerosol emissions reduction cannot be ignored. The effects of global change on China’s atmospheric diffusion conditions have been widely studied in recent years. But, studies on the effects of aerosol emissions reduction on atmospheric diffusion conditions is still lacking,” explains Weiyang Feng, from the group of Prof. Minghuai Wang, Nanjing University.

In order to fill this knowledge gap, Feng and her coauthors studied the changes of atmospheric diffusion conditions under the RCP8.5 scenario on the basis of three sets of single-model ensemble experiments from 2006-2100, and further explored the contributions from aerosol emissions reduction and increased greenhouse gases. The results have been recently published in Atmospheric and Oceanic Science Letters.