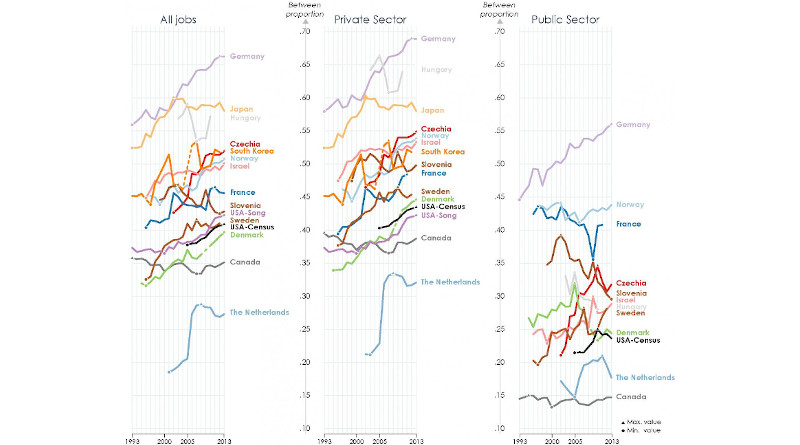 The proportion of total inequality that is between firms for the total (left), private (middle) and public sectors (right). The proportion of total inequality attributable to the between-workplace component has grown in every country except Hungary and Canada. Estimates are for all job except for South Korea, which are full-time jobs only. Japan, South Korea, and US-Song only have private sector estimates. South Korea is missing for 2005. CREDIT: UMass Amherst/Tomaskovic-Devey

In a new report in the Proceedings of the National Academies of Science (PNAS), lead author Donald Tomaskovic-Devey of the University of Massachusetts Amherst and his colleagues detail their examination of roughly 25 years of administrative records covering more than 2 billion job-years nested within more than 50 million workplace-years for 14 high-income countries: Canada, Czechia, Denmark, France, Germany, Hungary, Israel, Japan, the Netherlands, Norway, Slovenia, South Korea, Sweden and the United States.

In 12 of the countries they found that the share of inequality between workplaces is growing; Canada and Hungary were the only exceptions. Rising between-workplace inequality occurs when firms with powerful market positions simultaneously outsource production and services to temporary labor firms, subcontractors, global supply chains, franchisees, independent contractors and other low-wage firms. Firms such as Apple, Amazon, Marriott, McDonalds, Uber and Nike are prominent examples of this combination of market power and externalized labor.

“The extreme vulnerability of low-wage workers to the COVID-19 pandemic in the U.S. is linked to this trend of larger firms outsourcing risk and low-wage labor to weaker firms,” Tomaskovic-Devey points out.

“Most strikingly, we find in 12 of the 14 countries examined that the organizational structure of production is shifting toward increasing between-workplace wage dispersion,” the report states. “In all of those 12 countries this process is more pronounced in the private sector, but we also find rising between-workplace inequality in the public sector in eight countries.”

The study also shows that in countries with weak or declining labor market protections, inequality – particularly between-workplace inequalities – rises the fastest. In contrast, widespread collective bargaining coverage and high minimum wages reduce inequalities both between and within firms.

“We show that trends in rising between-workplace wage dispersion are closely aligned with declining national labor market institutions, institutions that in some countries once protected the bargaining power of employees relative to employers,” the authors write.

“We knew from past research that earnings inequalities in the U.S. were being driven by wage polarization between high-wage and low-wage firms, but I was shocked to see how widespread this trend is,” says Tomaskovic-Devey, professor of sociology and founding director of the Center for Employment Equity at UMass Amherst. “Although rising between-firm inequalities are widespread, it is crucial to recognize that both the levels of inequality and the speed of firm wage polarization are strongly tied to national labor market institutions. The U.S. has the weakest labor market protections of all fourteen countries we studied and has the highest levels of inequality.”

The authors write that results of their analyses suggest that policies aimed at reducing rising inequalities in national production systems might focus on between-firm and workplace inequalities via mechanisms that strengthen the bargaining power of employees and curtail the ability of powerful firms to outsource risk while absorbing revenue.

“Strengthening institutional protections for lower-skilled workers,” it concludes, “will not only improve their wages and job security, but also reduce the ability of more powerful firms to outsource production to lower wage firms. Policies to limit the market power of dominant firms may moderate both the earnings going to the top of those firms and their ability to externalize labor costs.”