The US Consumer Price Index fell 0.3 percent in May. This represents the fourth consecutive month of slowing in headline inflation as energy prices plunged another 4.3 percent this month after a 1.7 percent drop last month. Core inflation remained steady at 0.2 percent for the third consecutive month, and prices have risen at a 2.7 percent annualized rate over the last three months.

Energy prices have fallen nearly across the board over the last two months, including falls in gasoline prices of 2.6 and 6.8 percent in April and May, respectively. The sole exception has been electrical services, which rose 0.3 percent last month and just 0.2 percent over the past year. 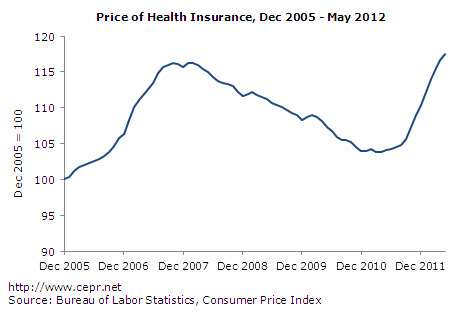 The price of used cars and trucks rose 1.0 percent in May—the third consecutive month of increases of at least 1 percent. This rise follows six months of decline, and prices are up only 3.5 percent over the last year. The price of used cars and trucks also rose at least 1 percent per month from February to June of 2011, so this may reflect an incomplete seasonal adjustment.

Elsewhere, the price of medical care services rose 0.5 percent, including a 0.6 percent increase in hospital services. By contrast, the price of medical care commodities—largely drug prices—was unchanged again in May. A 0.8 percent increase in health insurance prices brought the 12-month change to 13 percent. The increase over the past year follows a multi-year slide, and over the past five years, insurance prices are up only 2.3 percent. Health insurance prices have grown at a 2.3 percent annualized rate since December 2005.

The Producer Price Index for finished goods fell 1.0 percent in May, including a 4.3 percent fall in finished energy goods. The price of finished core goods rose 0.2 percent bringing the three-month annualized rate of inflation in this category to 2.5 percent. From November to February the core finished PPI rose at a 3.2 percent annualized rate.

For the second consecutive month prices have fallen at earlier stages of production. The PPI for core intermediate goods fell 0.2 percent in May and is up only 0.5 percent over the last 12 months. The more volatile price index for core crude goods fell 1.3 percent and stands 7.4 percent below its peak last September.

Further easing of price pressures is indicated by May’s fall in trade prices. Core import prices were flat in the month and up 1.3 percent over the past 12 months. The leveling of import prices in May was broadly-based, including a 0.1 percent rise in nonfuel industrial supplies. However, the price of materials associated with nondurable supplies rose 1.0 percent and select building materials rose 1.5 percent. Though these categories account for less than 6 percent of the overall import index, their prices rose over the last year 7.9 percent and 4.4 percent, respectively.

Core export prices fell 0.1 percent in May and stand only 0.2 percent above their level of May 2011. Last month’s fall in export prices was more heavily concentrated in industrial supplies, including every category. However, the price of electrical generating equipment rose 0.7 percent and that of non-auto consumer durables rose 1.5 percent.

Overall, this report is consistent with previous months—indicating stable and moderate inflation in core consumer prices and large falls in energy. With prices at earlier stages of production falling along with flat import prices there is a potential for some easing of consumer price inflation. Unfortunately, May’s $0.03 rise in real hourly earnings was entirely attributable to the fall in energy prices as nominal wages grew less than 0.1 percent in the month.