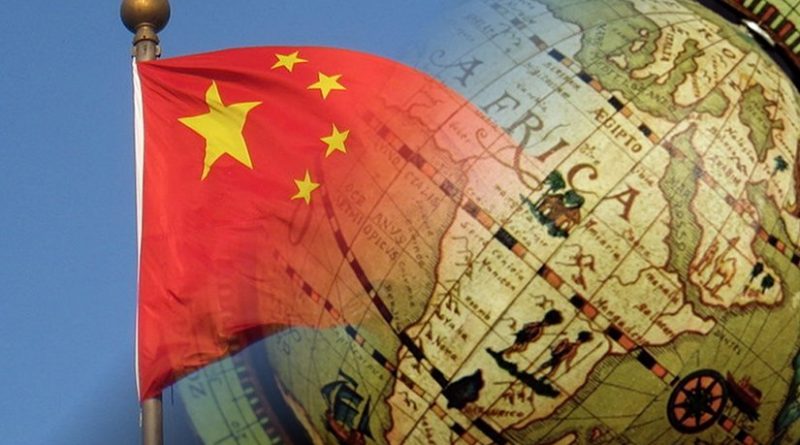 The economic growth of a nation, under certain conditions, can lead to a simultaneously expansionist foreign policy designed to ensure the establishment of its commercial and military influence in strategic regions of the globe. The astonishing economic growth that has characterized the Chinese economy over the last two decades will likely continue to have political implications for the economic and geostrategic ambitions of the West, a region carrying huge loads of debt with no long-term resolution of this problem yet in sight.

In the last two decades China has signed a series of trade agreements with several African states—in large part belonging to the group of French-speaking African states—with the aim to gain access to the raw materials found in abundance in these countries on the most favorable terms.

The Chinese strategy, defined by the Chinese themselves as a “win-win” approach, has in many instances proved quite efficient. In exchange for building infrastructure, such as roads, dams, and hospitals, Chinese companies, often supported by the Chinese state, have gained important trade concessions from African governments, such as the right to exploit local resources and even, in some cases, the right to send Chinese settlers to their country, which reduces China’s population pressure and serves geopolitical objectives.

In its relations with African dictators, China turns a blind eye to human rights abuses and democratic progress. This reassures Africa’s national governments, like those in Sudan or Zambia, which are often put under pressure by the West for these very reasons. In return, African regimes turn a blind eye to the dismal and unsafe working conditions the workers hired by Chinese companies often endure. The latter do not hesitate to use contemporary forms of labor exploitation, akin to new forms of slavery, imported directly from the motherland.

These ongoing developments are frightening the former colonial powers, particularly France, as they are seeing before their eyes the disappearance of their supremacy over African regions they have always considered, even after decolonization, their own “backyard”. Not surprisingly therefore, despite years of decreasing strategic, but not economic, commitment to the region, in April 2011 France decided to intervene militarily to resolve the political crisis between President Alassane Ouattara and Laurent Gbagbo in the Ivory Coast.

While the French government, along with the United States (through AFRICOM) and European states attempt to thwart, or at least slow down, China’s expansion efforts, Beijing continues to forge closer links along the trade routes that connect Africa, Europe, and Asia. China is also building ‘bridgeheads’ in the form of “commercial ports”, in what is called by Indian analysts the “String of Pearls” strategy, which will surround India with friendly Indian Ocean ports such as Hambantota in Sri Lanka, Gwadar in Pakistan, and other locations in Bangladesh, Myanmar, and the Maldives. Like India, most of China’s others neighbors are fretting over the Middle Kingdom’s growing intrusions into their affairs. The number of diplomatic confrontations between China and its neighbors has steadily increased over the last five years, especially in the South China and Yellow Seas over the exploitation of precious natural resources and a few archipelagos deemed strategic to regional states.

Emblematic of this modern day tug-of-war is the continued dispute between Japan and China over the Senkaku Islands. This case has made international media headlines on an almost daily basis since September 2010. In response to the rapid alteration of the balance of power in East and South East Asia in favor China, Washington has signed a series of agreements with Pacific countries, namely South Korea, Japan, the Philippines, Taiwan, Singapore, Malaysia, Cambodia, and Australia. These are amongst the regional countries most interested in forging a mutual defense agreement with the U.S. and gaining protection from China’s growing economic and territorial claims. China has even managed to alarm little Vietnam, a situation which has created an almost unimaginable economic rapprochement between Washington and Hanoi and the participation of the two countries in joint naval maneuvers.

In this climate of latent Cold War, Russia’s position remains ambiguous. The Russian Federation, after the trauma of the dissolution of the Soviet Union, has for years been trying to restore its lost glory through political and military actions. However, the inadequacy of its military apparatus to cope with the geostrategic changes of the last 20 years has been blatantly obvious on many occasions. Therefore Moscow has seen good reason to engage with China, a communist country allied to the USSR until the mid-1960s.

Despite the sometimes nearly irreconcilable differences between China and Russia they began to cooperate again at the beginning of the 21th century and became once again ‘bedfellows’, a situation perceived as disturbing by many American analysts. This cooperation is mostly manifest in areas such as trade in energy resources, sales of weapons, and technology transfer. Both countries are clearly trying to use their recent multi-faceted cooperation to challenge the U.S.’s global hegemony, which it has maintained without serious threat for the last twenty years.

Under the twenty-year Treaty of Good-Neighborliness and Friendly Cooperation Between the People’s Republic of China and the Russian Federation (FCT), signed by their leaders, Jiang Zemin and Vladimir Putin, on July 16, 2001, Russia and China agreed to hold joint military exercises along their still-disputed international borders. Moreover, the Chinese People’s Liberation Army, Navy, and Air Force have been supplied with billions of dollars’ worth of Russian military hardware. This Sino-Russian relationship has the potential to directly threaten America’s strategic interests in Eurasia and East Asia, as each nation strives to achieve a great power status which rivals that of the United States and its allies.

Several Latin American states, under the influence of the “neo-Bolivarian revolution”, have taken note of the obvious economic difficulties the United States is facing, especially in the light of its ever-increasing balance of trade deficit, and are turning towards developing economic ties with China. Beijing sees in Latin American countries, such as Brazil and Venezuela, both major export markets and important suppliers of raw materials and agricultural commodities.

China continues to expand its economic presence in other regions of the world traditionally under Western influence. In North Africa and the Middle East, China’s commercial penetration is a phenomenon which grows by the day. The signing of a strategic and commercial agreement by Beijing and Cairo on September 21, 2012 is a significant example of this. This accord provides for the construction of a six-square kilometer industrial area near the Suez Canal and a commercial port linking Asia, Africa, and Europe. This will be built by the Tianjin Economic-Technological Development Area (TEDA) in the next 10 years at a cost of approximately $1.3 billion.

Saudi Arabia is the largest supplier of oil to China (54.2 million tons in 2013), while bilateral trade between the two countries amounted to $74 million in 2012, according to the International Monetary Fund. Qatar, for its part, is China’s largest supplier of natural gas (1.8 million tons in 2011). The United Arab Emirates is China’s second largest trading partner and a major hub for the distribution of Chinese products in the Gulf region and beyond. Approximately 70 percent of Chinese exports to the UAE are re-exported to other Gulf countries, Africa, and Europe. China’s need to ensure energy supply, combined with the necessity to export its products as smoothly as possible, makes the Gulf region an essential piece in its “String of Pearls” strategy.

China’s rising interest in the Middle East is also determined by the need to contain Islamic terrorism in Central Asia, especially in the north-western provinces of China where there are many Muslim communities and national security is a constant preoccupation for Beijing. Consequently, China is pursuing a similar strategy in Central Asia. The establishment in 2001 of the Shanghai Cooperation Organization (SCO)—which now includes China, Russia, Kazakhstan, Kyrgyzstan, Tajikistan, and Uzbekistan, plus four observer countries (India, Pakistan, Iran, and Mongolia)—aims to facilitate trade, energy cooperation and to contain regional threats, including Islamic terrorism.

Richard Rousseau is Associate Professor and Chair of the Department of Humanities and Social Sciences at the American University of Ras Al Khaimah, United Arab Emirates. His research, teaching and consulting interests include Russian politics, Eurasian geopolitics, international political economy, and globalization.

This article appeared at the Diplomatic Courier and is reprinted with permission.