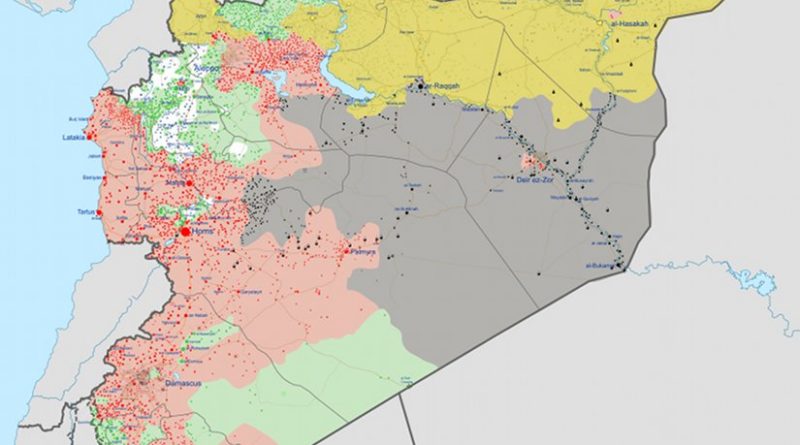 Syria’s vast Badia region is fast becoming a gravitational field for various players embroiled in the Syrian quagmire, with the Damascus regime funneling its military effort in a bid to secure areas abandoned by Daesh militants.

The 90,000 square kilometer plateau extending from central Syria to the Iraqi borders in the east and to the Jordanian borders in the south has become a valued strategic prize for various reasons.

For the regime it connects Syria’s heartland to Iraq and opens a vital supply line for Iran-backed militias, while offering Tehran a land corridor that reaches all the way to Lebanon and the Mediterranean. It also draws a line for US-backed Kurdish fighters moving on Raqqa, the last important bastion for Daesh in Syria.

In recent days regime forces and their allies have broken through US red lines by advancing north of Al-Tanf base on the Syria-Iraqi-Jordan border triangle, and reaching the Iraqi border for the first time since 2015. This was a major victory for the regime, which has defied coalition warnings and repeated aerial attacks on its convoys. More importantly perhaps is the fact that Syrian government forces have now connected with Iran-backed militias on the other side of the border. Both will attempt to reach the Syrian border town of Bukamal, cutting off Daesh fighters fleeing Raqqa. Russia has celebrated the Syrian army breakthrough and criticized recent US bombings.

In a matter of a few days the regime was able to occupy one-fifth of the Badia region and avoided clashes with US-backed rebels stationed near Al-Tanf. This development raises questions about the credibility of the US strategy in southern Syria and the value of ongoing US-Russian talks to create a de-escalation or safe zone along the Jordan-Syria borders.

Regime advances in the east coincided with aggressive attacks on Daraa province that have not elicited a reaction from the US-led coalition. Damascus wants to evict Free Syrian Army (FSA) and Al-Nusra Front rebels from the old town of Daraa, not far from the Jordanian border. The offensive, which is said to be led by elite Syrian army forces, derails previous Jordanian-Russian understandings to stabilize southern Syria and violates last month’s Astana agreement to create four de-escalation zones in Syria.

So far there has been no reaction from Washington over these latest developments. Russia appears to be accepting, if not supporting, the regime’s recent maneuvers in southern and eastern Syria. For one US regional ally, namely Jordan, the priority now is to defend its long borders with Syria against possible terrorist incursions. On Sunday the Jordanian army gunned down five people who attempted to infiltrate the border from Al-Tanf crossing. Tension in that area has heightened in the past few days. But it is not clear how Amman will deal with the fact that the regime and its Iranian-backed militias are tightening their grip over areas close to Jordanian territory. Amman had announced that it will not tolerate the presence of Daesh or militias supported by Iran near its borders. It now appears that drawing red lines in Syria carries little weight and that players must recalibrate their positions on a daily basis.

Theoretically speaking, the Syrian army’s attempts to extend its control over areas vacated by Daesh should be welcomed. Jordan has expressed its readiness to open its border crossing with Syria near Daraa once the Syrian army takes control. Even the US has accepted a symbolic regime presence at the border point. But regime forces do not act alone. They depend heavily on Iran-backed militias as was the case in Aleppo and elsewhere. With tensions with Iran at their highest point, neither Amman nor Israel will tolerate the presence of Hezbollah and other Shiite militias close to their borders.

Again these developments raise questions about the viability of the US strategy in southern and eastern Syria and why the coalition red line was allowed to crumble. What is the use of having US, British and other special forces in Al-Tanf if regime forces can go around it and connect with Iran-backed militias on the Iraqi side of the border?

The postponement of another round of Astana technical talks last week is an indication that Russia wants to give the regime time to create new realities on the ground. For now the proposal to establish a permanent safe zone in southern Syria, or anywhere else for that matter, appears to be dead or on hold. It is Damascus and Tehran that have imposed their agenda on the ground while Russia is merely a facilitator.

The goal of creating a land corridor connecting Tehran to Beirut through Baghdad and Damascus has come a long way in the past few days. The US-led coalition had done little to prevent it. Now the countries of the region have to live with its dire consequences!

• Osama Al-Sharif is a journalist and political commentator based in Amman.