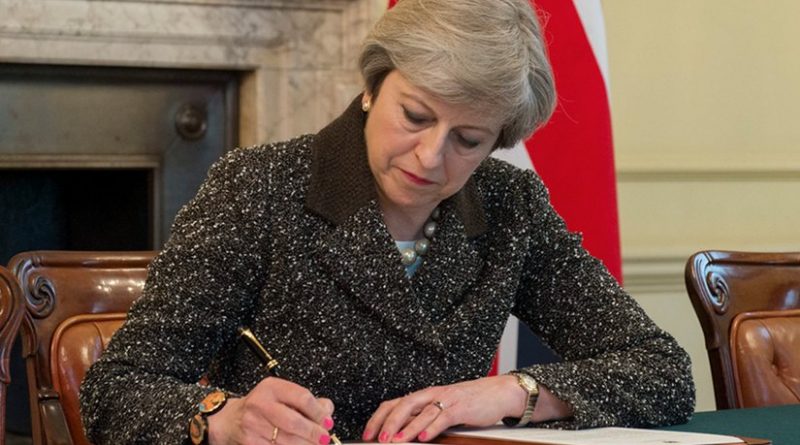 Nearly seven months after Theresa May invoked Article 50 of the Treaty of Lisbon, her ministers are waking up to security implications far beyond what they would like to admit. In both London and Dublin, critics are justifiably warning that “hard Brexit” from the European customs union could jeopardize the peace in Ireland – reopening a wound European integration has kept stitched up for two decades.

The debate over the Irish border is offering the UK a difficult lesson in how Brexit’s “purely” economic questions will bleed over into other areas of British foreign policy. After all, the UK and Ireland would only be re-imposing their border for customs purposes – but as former Northern Ireland secretary Peter Hain told the House of Lords, Theresa May’s moves to gloss over that issue by proposing an “invisible border” are “delusional, contradictory, and potentially very damaging.” The lead MEP on Brexit, Guy Verhofstadt, has been even more blunt in writing off the invisible border idea as impossible.

For the rest of Europe, the befuddled British approach to its Irish border question is a warning not to take Theresa May’s vision of a far-reaching partnership “to protect Europe together from the threats we face in the world” seriously. If her government is so nonchalant towards the arrangement that ended decades of violence and terrorism across the British Isles, how can it be trusted to appreciate the stakes of other critical security questions?

Ireland isn’t the only example. All while admitting her country will have to continue respecting European Court of Justice (ECJ) decisions during the upcoming “transition” period, May is sticking by her pledge to pull the UK out of the ECJ, which presides over vital institutions like Europol and the European Arrest Warrant.

May’s ministers compound that distrust with blithe unawareness of the stakes. Home Secretary Amber Rudd nonchalantly claimed last month that the UK was planning a treaty to keep it inside Europol after Brexit, even though the UK cannot remain a member of Europol or Eurojust (nor of the European Defense Agency) without ECJ jurisdiction. The only solution would be for London to renegotiate some kind of shared access to information and analysis as an outside observer.

At the rate Brexit negotiations are going, that means a dangerous gap in British and European protection from cross-border threats at a time when terror groups are perpetrating ever-more deadly attacks across both the UK and the Continent. It took decades of confidence-building and constitutional changes for European member states to gain unfettered access to criminal databases, not to mention the ability to arraign suspects in other EU countries.

Even that ability – embodied by the European Arrest Warrant – is in danger. Germany only allows the extradition of its citizens to other countries within the EU, meaning it would have to amend its constitution to allow extradition to the UK after Brexit. For any number of domestic political reasons, those changes could get held up or neglected, creating legal loopholes that impede Europe’s ability to prosecute criminals and terrorists.

The Centre for European Reform has presented three possible scenarios for future extradition arrangements, and all fall short of the current system. Option one would be signing 27 bilateral agreements – a solution so inefficient that it rules itself out. The second option is to revert to the 1957 European Convention on Extradition, under which it took 18 months on average to complete an extradition request (compared to 15 days for uncontested cases now). The last option is a “seek and surrender” agreement that would work like the EAW, but would likely take years to negotiate. The EU’s side-deal with Norway and Iceland took five years to hammer out and a further eight to be ratified by all EU members.

As with other components of European security and law enforcement cooperation, Eurosceptics in Britain have long been glib about the EAW system. They see the mechanism as a stick with which to beat the EU, and those fighting extradition have been happy to tap into their fervor. One case in particular involves Romanian businessman Alexander Adamescu, whom Romanian anti-corruption services sought to extradite after he fled corruption charges and moved to England. Adamescu (with the help of his lawyers) portrayed himself as a playwright being pursued on political grounds, despite his business dealings leaving a trail of bankruptcies and shell companies from Bucharest to the Virgin Islands.

The irony of all this is that the UK is a net exporter of extradition cases. Thanks to the EAW, British authorities have shipped over 6,500 detainees out of the country while receiving just 800 in return. Even Amber Rudd recognizes the EAW’s importance, calling it “absolutely essential” the UK remain part of it. Where the EAW does have objective flaws, other EU member states (like Germany), have found quick fixes with measures like a “proportionality test” to ensure there is a legally sound basis for extraditions they authorize.

The tragedy of London’s dazed and confused approach to European security cooperation is that these institutions, helped by major British contributions, have finally been coming into their own. A Europol report found that its database – to which the UK will no longer have access after Brexit – saw a 60 percent rise in operational messages between 2000 and 2016. Furthermore, the Schengen Information system was consulted 2.9 billion times by field services in 2015 alone.

By throwing itself headfirst out of these joint efforts, the UK is merely compounding the wrongheaded approach nationalists like Nigel Farage advocated before last year’s referendum. It was Farage who stood before a racially charged image of migrants last year, claiming they were coming to British shores. At no point did he advocate increased assistance to the overworked, understaffed Frontex teams responsible for protecting Greek and Italian shores. As Northern Ireland now knows, not even those who masterminded Brexit know what “taking back control’ of British borders truly means – at least beyond undermining the security of all of Europe.

The opinions, beliefs, and viewpoints expressed by the authors are theirs alone and don’t reflect any official position of Geopoliticalmonitor.com, where this article was first published.