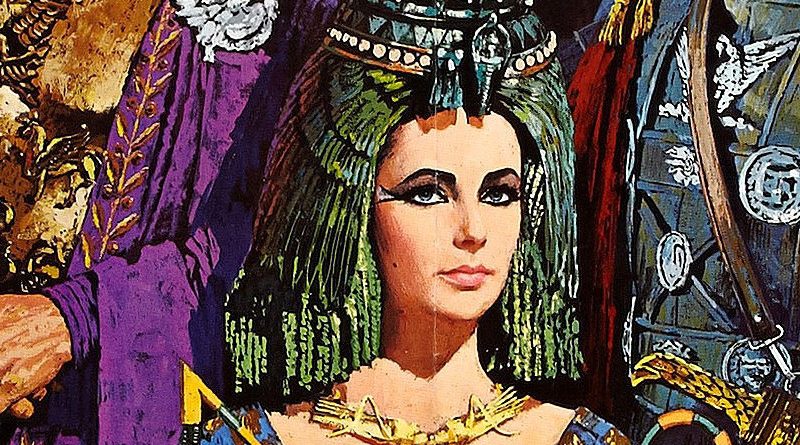 After Israeli actress Gal Gadot announced this weekend that she would play the legendary Egyptian queen Cleopatra in a major movie, it didn’t take long for opposition to start on social media. One tweet even said Gadot was “stealing” the role from Arab actresses.

But many people pointed out that Cleopatra was not an Arab — she was descended from a Greek Macedonian father, and historians don’t know the ethnicity of her mother.

This is not the first time in recent memory when the ability of a Jewish movie star to play Cleopatra has caused controversy. The most famous Cleopatra film was released in 1963 and starred Elizabeth Taylor. The film was hugely successful.

Taylor had converted to Judaism a few years earlier, before her marriage to singer Eddie Fisher, and had become outspokenly supportive of Israel. At the time, Egypt saw Israel as its enemy and banned any kind of relations with Jews and Israelis. So when the film first came out, Egypt banned the film. But the ordeal had a happy ending.

In 1959, Taylor had made her Zionist support public in a big way, buying $100,000 of Israel bonds at a fundraiser dinner in Los Angeles with her new husband Eddie Fisher (who only bought $10,000 himself).

She had already finished her conversion with a big ceremony at Hollywood’s Temple Israel (where I was Bar Mitzvah and Confirmed) and had spoken to the press about her love of Judaism. She was not converting for her husband, she made clear — she claimed she had admired Judaism “for a long time.”

“Cleopatra” was released in 1963, and won four Academy Awards in 1964. Egyptian officials enjoyed the film so much that they removed Taylor from the travel blacklist. As the news media reported: “The officials decided the film was good publicity for Egypt which is mentioned 122 times in the movie.”

Kabbalah, the Jewish mystical tradition, claims that the souls of most converts to Judaism are the reincarnated souls of Jews in previous generations that were cut off from the Jewish people. Through conversion to Judaism they are coming home.

Sometimes these souls are descendants of Jews who were part of whole communities that were cut off, like the Marranos.

Other times they are descendants of individual Jews who married out and did not raise their children as faithful Jews.

An example of the later is recounted by an English Rabbi, Barbara Borts: “One of the most touching conversions I ever did was a young girl of 11, brought to me by her mother, to discuss Judaism. The mother was a widow, living back at home with her mother and her father, who was a Protestant minister.

This girl had done some research on Hanukkah for her school class, and in the process both loved what she learned; and discovered that her late father’s grandfather was a German Jew.

I asked her mother why she would support her daughter’s conversion to Judaism. Her response – her 2 daughters were no longer going to church and she was delighted that one had found a religious home. She hoped her older daughter might also find that of interest.

When I said that I could not imagine doing what she was doing if the positions were reversed, she said, “It’s different for Jews, after the Holocaust and all.” So she started Hebrew school classes, and attending services. I moved a couple of years later, and bequeathed her to the next rabbi.

Some years later, we met up again when she was in University. She had converted, changed her name permanently, and was an active member of Hillel. Bless the girl – I think she is now in rabbinical school.”

Other people who become Jewish do not know of a specific Jew who was an ancestor; but do come from a population that contains many descendants of past Jewish communities.

The Church viewed these baptisms as valid; because the Spanish Jews had freely chosen baptism over death, unlike the Jews of France and Germany during the first and second crusades, who chose to kill themselves rather than be baptized.

Over the next three generations there were additional riots that led to more forcible baptisms. Of course, Jews forced to be Christians didn’t stop believing in Judaism, but they had to practice Judaism and teach their children in secret.

The Church knew this, but they thought that all the children and grandchildren of the Marranos (as the secret Jews were called) would be indoctrinated in the true faith and become believers. This did not happen.

In 1480 the Inquisition began holding trials in Spain. Over the next two centuries thousands would be tried/tortured, and imprisoned or executed. In 1492 all unbaptized Jews in Spain were exiled. Over 100,000 Jews left Spain, most of them going to Portugal.

In 1497, they were expelled from Portugal, but first all their children were forcibly baptized, so parents who didn’t want to lose their children had to freely choose baptism.

In later decades many of these secret Jews and their children came to the new world seeking freedom; so the Inquisition was established in Lima in 1570 and in Mexico City in 1571. Secret Jews fled to all parts of central and south America to escape. (see: A History of the Marranos by Cecil Roth).

Many descendants of these people have Jewish souls and are now returning to the Jewish people. How would someone know if he or she could be one of them?

Signs of a Jewish soul.

1- You like to ask questions? But when you asked them as a child, you were told faith is a gift from God and you shouldn’t question it. This never satisfied you, although others didn’t seem to have a problem with this view.

2- The trinity never made any sense to you even as a young child. You prayed to God the father more easily than Jesus the son of God, even though you were told to pray to Jesus. You couldn’t believe that people who didn’t believe in Jesus couldn’t go to Heaven.

3- You found you related well to Jewish people you met at work or at school even though they were culturally different from your own family.

4- When you first learned about the Holocaust you reacted more emotionally than did other members of your own family.

5- When you start to learn about Judaism the ideas and values seemed reasonable, the traditions and heritage are attractive, and you feel more at home in Judaism than you ever felt in your birth family’s religion.

More information about reincarnation and becoming Jewish can be found in “God, Sex and Kabbalah” by Rabbi Allen S. Maller or at Rabbi Maller’s web site: rabbimaller.com ‘Judaism is for Non-Jews.’ and in Rabbi Maller’s recent book “Which Religion Is Right For You? A 21st Century Kuzari”.

Home » When Cleopatra Was A Jewish Queen – OpEd